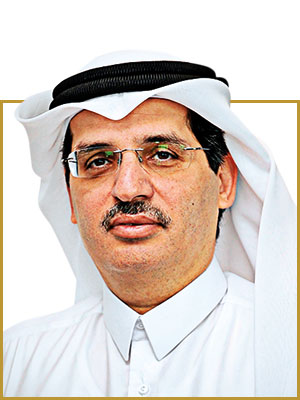 Marafih’s prowess with technology was clear from an early age, when he was awarded a place at George Washington University to study Electrical Engineering. He stayed with the academic institution to gain an MSc in Telecommunications and a Doctorate of Science in Telecommunication Engineering.
His career started at Qtel in 1992 as an expert advisor. Marafih quickly worked his way up through the ranks, becoming the company’s strategic planning and development manager, and also serving as divisional manager of strategic planning and development.
He was appointed CEO of the company in 2006 and has since been credited for his many strategic initiatives and landmarks. In 1994 he introduced the first GSM (global system for mobile communications) service in the Middle East, and two years later the first internet service to Qatar.
It hardly needs to be stated how important these developments proved to be. Qtel experienced incredible growth – going from a single-country operator to a multinational with 17 operations across the Middle East, North Africa and Southeast Asia. Under Marafih, things were moving quickly.
In 2013 the firm undertook a major rebranding and was named ‘Ooredoo’, which means ‘I want’ in Arabic. Speaking about the rebranding to Gulf Business, Marafih said: “We are really excited… The objective is to bring the group together, to stand for one vision and to focus on the customers and human growth. We want to be the company that stands for changing and improving people’s lives, and it is important that the brand helps us in achieving that.”
The company currently remains focused on expanding, and it has particular interests in the MENA region and Southeast Asia. Marafih is widely respected as an advisor and has sat on a number of high-level committees in the government, as well as private ones. He had demonstrated his capability with managed services and team management many times.