At one with business

Jane Bordenave talks to Tony Sadownichik of Greenpeace about his reasons for studying the Global Executive OneMBA at Rotterdam School of Management, Erasmus University and the benefits it has brought to Greenpeace's work 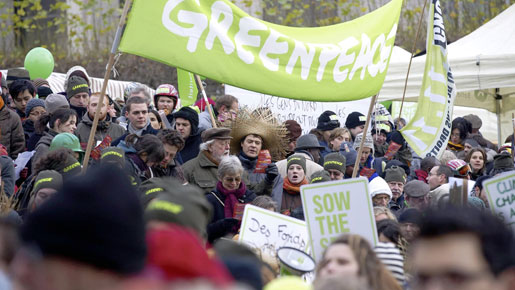 During the 1980s, Tony Sadownichik was employed by KPMG Consultants in Canada, working largely with clients in extractive industries such as mining, fisheries and forestry. In 1999 he joined Greenpeace and is now the Global Head of Research for Greenpeace International, focusing on the dual areas of policy and campaigns. What was the turning point that led to this change in career path?

“During my time working as a consultant, I became convinced that economic success and environmental responsibility were mutually inclusive – and increasingly so.” says Mr Sadownichik. As Greenpeace had pioneered the international integration of economic factors within its campaigns, he began working with Greenpeace Canada, later moving to Greenpeace International: “Greenpeace increasingly integrated economic factors and business models into developing campaign strategies and were looking for expertise in this area,” he explains, “we worked to identify how companies’ that integrated progressive environmental objectives could not only be used as leverage points for change but as sound business models.”

The importance of NGOs for business may not be immediately apparent, but some can offer businesses a great deal of help to make decisions that make economic and environmental sense: “At Greenpeace, we know the challenges that face companies in integrating the imperatives that intersect the economic, environmental, and social equality objectives we all face,” says Mr Sadownichik, “But we also recognise the opportunites for business, as the solutions cannot only come from government or NGOs – many solutions to our current global economic and environmental challenges,will really be found in the business world. This is why finding solutions with CEOs that realise the opportunities to be both an environmental and business leader is crucial for our campaigns and why it is critical, for my role, to be close to current economic theory application and broaden my business network.” The primary focus of Greenpeace’s campaigns is a positive approach to find long-term responsible solutions and CEO’s progressing equitable sustainability issues are much better placed to realise the long-term economic opportunities. Mr. Sadownichik asserts, “a responsible environmental and social equity path is also the strongest long-term business model.”

As well as looking at economic models, the organisation also approaches companies from a risk management perspective. This is not only risk in terms of identifying irresponsible practices, but also risk of finding themselves on the wrong side of regulation, of negatively effecting customer perceptions and the risk of competitors positioning themselves as the greener, more desirable producer. Two different examples of CEO reactions to Greenpeace’s recent campaigns are McDonalds 2007 procurement practices in the Amazon and Nestlé’s current procurement policies in Indonesia.

“A few years ago, we confronted McDonalds with the damage their soy procurement was having on the Amazon. At the time, the company’s suppliers were a driving force in rainforest destruction. We put our case to the top level management and their initial reluctance faded as we persuaded them that changing and reforming suppliers and becoming a positive force in the arena was a smart business decision,” details Mr Sadownichik, “McDonalds decided to become a more responsible business leader, turning what could have been a PR problem into a positive news story about how they would help lobby the broader industry to be more responsible and responsive.” He juxtaposes this against the organisation’s work on rainforest destruction in Indonesia, which focuses on food giant Nestlé. Mr. Sadownichik feels that the company is focusing on its short-term costs to change and reform palm oil suppliers Cargill and Sinar Mas while missing the longer-term and more costly negative affect on their brand. He sees this as an unrealised opportunity for Nestlé, as consumers increasingly receive information and participate in campaigns via social media, e.g. Facebook. “Nestlé’s current association with rainforest destruction in Indonesia is plainly bad for business and immediate responsible action to progress a long-term solution is needed to better position their brand”, says Mr Sadownichik.

What quickly becomes clear is Mr Sadownichik has an extraordinarily good head for business: He identified links between what are often considered to be competing ideals – business versus environmentalism – long before it became the issue it is today and has put this insight to work within Greenpeace. However, he hasn’t taken these intuitive skills for granted. Realising that gaining a business qualification could further strengthen his knowledge base, he decided to study for an MBA. Having examined the courses on offer, he chose to follow the OneMBA degree program at Rotterdam School of Management, Erasmus University, from where he graduated in 2008. Why did he choose this qualification over the traditional executive MBA’?

“My role at Greenpeace involved working internationally, with multiple teams, and primarily remotely, every day.

As such, I needed the most versatile and international MBA program I could find – not just from the perspective of the institution involved, but also from the perspective of the quality and diversity of the participants,” he says, adding, “I had the opportunity to learn from colleagues working from Brazil, Mexico, Hong Kong and the US, as well as Rotterdam, and we found new ways to resolve our respective challenges and better realise productive opportunities.”

Mr Sadownichik considers that the critical aspect of the OneMBA course is the richness of experience it gave him, both in terms of business insights of the people he was working with and in the diversity of the faculty itself. Additionally, Rotterdam School of Management, Erasmus University and the OneMBA program incorporate a particularly strong focus in terms of corporate responsibility allowing him to find opportunities to converge Greenpeace’s method of encouraging equitable sustainability with business practice.

“Greenpeace is a large and complex organisation, with a wide range of international campaigns. I was immediately able to apply culturally sensitive insights that I gained from the OneMBA to our organisation and make practical improvements that very quickly increased the effectiveness of our work,” says Mr Sadownichik, “I was also able to compare how my colleagues in other parts of the world were dealing with the same fundamental issues and what could work for us.”

So why should CEOs and top level management care about NGOs like Greenpeace? Increasingly, these organisations and charities are focusing on businesses as opportunities to drive progressive change. By augmenting staff skills through programs such as the OneMBA, they are able to offer solid, pragmatic advice to help them build environmental and social responsibility into their business models. Frequently, they also reflect and influence public opinion, and the opportunities and advice they offer can help companies reinforce their relationship with their customers. NGOs are there to help, not to hinder, it is now up to business leaders to take up their offer.  n