Space travel has given us GPS, cordless technology and a better understanding of global warming. As the commercial space race becomes a more opportunistic endeavour than space exploration, how much money will it take to pursue either option and what role will Europe have to play? 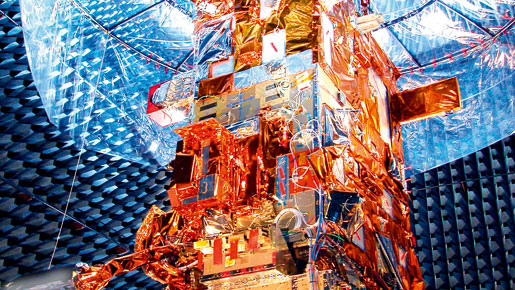 When the space shuttle Atlantis landed for the last time at the Kennedy Space Center this year, it marked the end of NASA’s programme as we know it. Experts believe that NASA will continue to drive space exploration in the future, yet its once central, international role has momentarily shifted to other organisations such as the European Space Agency, its sister agencies, and private industry.

There is a wealth of ideas for collaboration between agencies, and ambition to combine American and European technologies to advance space exploration and scientific growth.

The ESA is expected to cooperate with NASA more than ever, but it remains unclear how much can be achieved on the ESA’s comparatively restricted budget. The US spent around $18.7bn in 2010 on space exploration, marginally higher than its European counterpart.

Even though ESA officials announced a couple of months ago that 14 of its members agreed to increase their 2011 contributions, it is still not as high as NASA last year.

Funding from afar
The majority of ESA’s projects are sponsored through donations from the agency’s member governments and each country takes shares in programmes it considers most likely to generate contracts for its national pursuits. Earth observation, satellite navigation, telecommunications, and space transportation are considered voluntary, while other endeavours are compulsory. The agency’s recent budget rise resulted in a seven percent increase to €2.97bn and is said to serve as an emergency financial bolstering.

The European agency believes the spending increase indicates a common belief by Europeans that space technology and research in the field is a sound investment.

Additional money came from the executive commission of the 27 countries within the European Commission (EC) as part of projects managed by the ESA. Among these are the Galileo satellite navigation system and the Global Monitoring for Environment and Security (GMES) earth observation programme.

As much as €778m will go to the ESA in 2011 from the EC. An estimated €233m will come from organisations for which the ESA performs work, such as Eumetsat, Europe’s meteorological satellite company. Lastly, an estimated €7.9m will be contributed from nations that have Cooperation Agreements in place, an arrangement just short of full membership. Romania, which has contributed to over 30 space missions, signed the Accession Agreement to the ESA Convention in January to become the 19th ESA Member State. The combined figure will give the agency €3.99bn in 2011, which is a 6.7 percent increase from what the ESA had to work with in 2010.

Spacing out
The ESA has joined forces with various agencies to ensure it remains at the forefront of space research and exploration. As well as NASA,  cooperative ventures have been established with China’s CNSA, Russia’s Roscosmos, CSA in Canada, JAXA in Japan and India’s ISRO. On top of that, the ESA works closely with some of the most highly reputed organisations within member countries and supervises a global network of stations which assist in the assembly of remote sensing information. The key alliances are with French space agency Centre National d’Études Spatiales (CNES), Italian Agenzia Spaziale Italiana (ASI) and the Deutsches Zenrum für Luft und Raumfahrt (DLR) in Germany.

The civilian aerospace industry has of late played a vast role in the development and progress of Europe’s space development. The manufacturing industry, of course, produces aircrafts, engines, guided missiles, space vehicles, and other parts essential to the sector.

The ESA is one of the largest consumers of aerospace technology and works with companies such as Boeing, Lockheed Martin, Bombardier, Airbus, BAE Systems, EADS and Thales regularly. In August, NASA showed it would remain part of the space race, contracting with seven private space companies to help offer technology and research tools to challenge the boundary between earth and space. The majority of the selected companies, which include Virgin Galactic, Masten and Whittinghill, are currently working on offering flights to space tourists in the near future.

The European goal
As part of an effort to better relations, the International Academy of Astronautics (IAA) hosted the Heads of Space Agencies Summit in Washington DC on its 50th anniversary in November 2010. There were four areas identified as primary goals for the ESA and its sister agencies. These were human spaceflight, planetary robotic and lunar exploration, natural hazards and climate change. The heads agreed on the declaration that stronger international teamwork and coordination at the highest level were required to strengthen the efficiency and sustainability of global space activities.

Director General of the ESA, Jean-Jacques Dordain, said: “I am welcoming the declaration, which has been drafted for the summit, and the four topics of the declaration which are all priorities of the ESA Member States, and for which ESA is cooperating already with a lot of international partners.”

CNES president Yannick d’Escatha agreed. “Space is a solution for global needs and all French programmes are developed within cooperative frameworks for that reason. Today, we have focused on domains where cooperation is particularly useful to release high-level and independent reports on space matters whose topics reach all of us and are reckoned as top priorities for humanity.”

The Russian Federal Space Agency was also present and explained its plans to work closely with the ESA and its sister agencies. Its piorities with respect to the four central topics focused specifically on human space flight. The RFSA’s primary goal for the next decade is to use the international space station’s capabilities to perform experimental space research and ensure continuing human presence in space. Anatoly Perminov, Director of Russia’s space station, said: “We believe that moving in this direction will open new prospects for pending international cooperation in human space flight. Considering this fact, the Russian government has provided a resolution of support to Russia’s plan to expand the ISS lifetime until at least 2020.”

Space in time
There are numerous projects where close collaboration between the ESA and its sister agencies proved to have a positive impact on progress. Among those is the Hubble Space Telescope which was built in collaboration with NASA in 1990 by the shuttle mission STS-31. Its orbit above the earth’s distorting atmosphere permits astronomers to make extremely high-resolution observations into new planets, stars and galaxies.

The two agencies also worked together on CryoSat-2, which launched in April 2010. The three year radar altimetry mission which receives critical data about the ice thickness above the Arctic helps scientists who are studying the ice in the Polar region. Initiated in 2006, MetOp-A is considered Europe’s first polar orbiting mission devoted to operational meteorology. ESA is preparing the next generation of MetOp satellites currently. The existing MetOp series has three indistinguishable satellites, which guarantee the continuous delivery of high-quality data until at least 2020. The MetOp-A will be followed by MetOp-B in 2012 and MetOp-C in 2016.

Further ongoing projects include the ERS-2, an earth-observing satellite launched in 1995. It completed its scientific mission in September and is now being pushed through the earth’s atmosphere in a procedure that has never been attempted at the European Space Operations Centre (ESOC). The satellite will continue its slow and steady descent for an additional ten to 14 years and will in the end vaporise in our atmosphere.

Another high-profile venture, Mars Express (MEX), is a space probe to Mars which launched in 2003. It has submitted some stunning, never-before encountered images and data, offering an invaluable range of insight into the planet’s history, its present condition and its potential future. MEX was also the first spacecraft to discover subsurface water on the planet.

Also considered a major project is the Rosetta space probe, which was launched in 2004. Rosetta is orbiting at a distance of over 679,000,000km from Earth and will reach its peak distance in December 2012, at 937,100,000km. The goal is to explore comet 67P/Churyumov-Gerasimenko in 2014. The ESA and ESOC plan for Rosetta to orbit and land on the comet, something that no other space agency has ever succeeded at.

A learned profession
A broad range of engineering skills and scientific proficiency is required for the efficient running of any space agency’s project. One essential field is electric and ion propulsion, which helps create energy through jet engines, rockets, turbo-machinery and internal combustion engines. Control engineering is employed by the agency for the study of mathematical modelling in propulsion systems, aircraft and spacecraft that exist on vehicles. Aerospace engineering and the study of aircraft structures are fundamental components for the agencies. The former keeps structures lightweight, while the latter considers the physical arrangement needed on aircrafts to help endure the vigour encountered during flights. Solid mechanics and materials science are both fields that allow engineers to invent new materials or modify existing ones.

Although four of the top five universities for aerospace engineering are based in the US, Europe has nevertheless acquired a stellar reputation for its prestigious and celebrated colleges in this area. The Imperial College London, which was established in 1907, has Europe’s largest engineering department with over 1,200 staff and an estimated 5,000 students. The Swiss Federal Institute of Technology, ETH Zurich, is Switzerland’s leading university in this field with several specialist areas such as nano systems and robotics nuclear engineering. The University of Cambridge, which was founded in 1875, includes courses in the structural, mechanical and electrical arena. Names such as Stephen Hawking and Robert Hooke emerged from the University of Oxford. It is considered to be Europe’s fourth most-valued engineering university.

Founded in 1842, TU Delft is the largest technical university in the Netherlands and ranks among the top five European aerospace, electrical and mechanical engineering courses.

The École Nationale Supérieure de l’Aéronautique et de l’Espace tops the table in France, while RWTH Aachen, TU Berlin and TU Braunschweig are of equivalent standard in Germany. Universities often collaborate extensively with space organisations and allow students on placements within some of the projects. The cooperation has helped with findings and research, and represents an important facet in helping to promote progress for the ESA and its sister agencies.

A giant leap for mankind
Space travel will always be important to human evolution. It has given us newly established waterproof materials, GPS, cordless technology and a better understanding of global warming, our universe and beyond. It also gives mankind a sense of pride and achievement. Many believe that NASA’s retirement of the space shuttle and the birth of commercial space racing will change the face of space exploration. Private industry will also feature highly in this new era, but it is so far unclear to what degree it will be able to step in and lead the way. It is however commonly understood that alliance between agencies such as ESA, NASA, Roscosmos, and in more recent times China’s CNSA and India’s INCOSPAR, will continue to be the answer to space exploration success for the future.