Using telepresence and videoconferencing systems within everyday working life took a long time to establish due to unmanageable operations; but with 21st-century improvements, it has never been easier 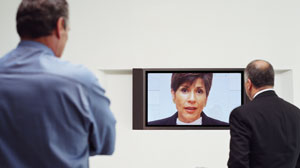 First introduced in the 1980s to apocryphal predictions of the end of business travel, commercial videoconferencing never gained the mass adoption that would embed it in our way of working. Early systems offered poor transmission quality, restricted viewing angles and a lack of portability that rendered them the stuff of executive jokes rather than a vital business tool. One early user tells of how his London-based colleagues played a game of ‘Business Jargon Bingo’ off-camera while their erstwhile US  overlords rambled on about targets and cost savings from a plush New York office.

Despite the developers’ early focus on business benefits, the ultimate driver for improvements to the technology has come mainly from consumer demand for improved social networking capabilities. Growth of the internet, reduced costs of bandwidth and the rapid increase in mobile devices have all enabled the delivery of slick video communication systems to desktop and handheld devices, as well as to the boardroom.

The new term, telepresence, reflects the ability of today’s systems to make users feel as if they are present in another location.

New uses for existing technology
Critical to this experience are features that adjust the viewpoint on the user’s screen to adapt to any movements in the position of his or her head, mimicking the visual experience the brain would have in direct face-to-face conversation. Larger screen sizes, multiple screens and enhanced digital images all add to the emotional impression of being in the presence of the other party. More sophisticated systems also incorporate elements of physical presence through the use of robotics, which enable a user at one location to manipulate items in the other.

As the technology develops, the range and sophistication of applications is growing well beyond social communication and business cost-cutting. In medicine, for example, systems have been in use for many years that enabled surgical specialists to observe and even instruct medical staff working in an operating theatre miles away.

By 2005, the Defense Advanced Research Projects Agency (DARPA) in the US was working with developers on the first unmanned medical triage and treatment facilities for use in the battlefield. These automated medical ‘trauma pods’ enabled clinical staff to assess and stabilise wounded soldiers from a remote location. More recently, NASA has been working on remote robotic operating systems that will perform in the extreme conditions of outer space or the deep ocean.

Sending the right signals
Back in the commercial environment, CIOs and CEOs are discovering the power of the new systems for enabling meaningful collaboration throughout an organisation. Sales force objections to early videoconferencing systems, that ‘you need to have face-to-face dialogue’ to understand your customer, have been largely overcome with systems that enable direct eye contact through the screen. The ability to open interactive documents and stream video enables users to collaborate on a plethora of projects from multiple locations.

All of these capabilities, of course, consume huge amounts of bandwidth on already stretched data lines. Supplying that bandwidth, whilst guaranteeing a minimum quality of transmission, is the biggest challenge for service suppliers today. QoS (quality of service) refers to a smorgasbord of aspects, including signal-to-noise ratio, service response time, cross-talk, echo, interruptions, frequency response, data loss, and sound levels, all of which affect the user experience. A minor glitch in any of these aspects could prove catastrophic to the outcome of the connection, causing many service suppliers to prioritise data flows so they can guarantee service level agreements on critical data streaming applications.

The ability of telepresence systems to include formerly unreachable members of the global community is also driving providers to find innovative technical solutions. One of the growing applications for telepresence systems is in the provision of education to people in remote communities that are not yet online. For these applications, a capability based on the delightfully acronymed POTS (plain old telephone system) has been developed.

Beam me up, Scotty
So despite the technical challenges, development is moving swiftly to keep up with demand and we can expect to see more ubiquitous use of telepresence in the future. New systems are able to integrate the plethora of digital tools already in the hands of busy executives, such as interactive whiteboards, table computing, digital flipcharts, mobile terminals and hand-generated graphics. With these systems, the dream of achieving better work/life balance by staying at home but being fully integrated in the office environment may well become a reality.

And the next wave of applications is emerging in the business-to-consumer market. Multi-outlet retail organisations searching for a more cost-effective way of making specialist product information available to consumers on a one-to-one basis may be the early adopters. Both AT&T and the Bank of America in the US have already run trials on in-store information kiosks that connect consumers with product consultants or financial advisors through telepresence links. It won’t be long before they are able to beam the expert right into the consumer’s home. Teleportation next?

European CEO Telepresence Awards 2011
Over the past few years what began as cumbersome video technology has thrived into a communication medium that could revolutionise not only the way we do business, but also the way we get expert opinion to the people who need it without having to wait for that person to travel. Whether this be in the business, customer service, medical, aerospace or military arena the scope for expansion is enormous. Very few telepresence and videoconferencing service providers have embraced this potential and harnessed it into a useable product. In recognition of this European CEO has acknowledged the outstanding companies in this field.