There are few businessmen to have lead as extraordinary a life. Born into a rich heritage, Lapo Elkann turned his back on the path laid out to him 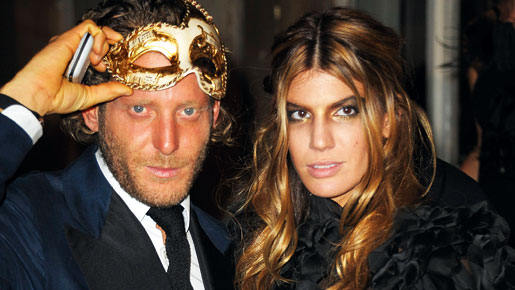 Lapo Elkann, heir of the Fiat dynasty, fits the playboy socialite stereotype with uncanny precision, if not cartoonish exaggeration. All the trimmings are there – the fancy cars, the dapper dress sense and the surfer’s locks teamed with a virtually permanent golden tan. And, naturally, there are glamorous women in Elkann’s life. (One of his most notable squeezes was the Italian TV and film personality, Martina Stella, with whom Elkann was engaged.) A staple in the gossip columns, Elkann’s high flying lifestyle has often been compared to that of his equally fast-living grandfather, Gianni Agnelli, who passed away in 2003 at the age of 81.

Born in New York on October 7, 1977, Elkann is of impressive descent. He is the son of Margherita Agnelli de Pahlen and the writer Alain Elkann, and the grandson of the super couple, Marella Agnelli and Fiat chairman Gianni Agnelli. To add yet more glamour to the family tree, Russian count Serge de Pahlen is Elkann’s stepfather. On the sibling side, he has an older brother, John Elkann, and a sister, Ginevra Elkann. Also forming part of the sibling line-up, he has five half- siblings from his mother’s second marriage.

Like a true cosmopolitan, young Lapo spent his childhood and teenage years flitting between New York, London, Brazil and Italy. These days, the energetic 34 year-old spends most of his time in New York, but is no stranger to Shanghai, either. Being the citizen of the world that he is, the man is fluent in six languages.

Although he’s spent most of his life away from Italy, Elkann exudes an unmistakable Italian air. Being a scion of the Italian family par excellence, The Agnellis, this fact is hardly surprising. Vivacious and energetic to such degree that he’s been described as hyperactive, Elkann also possesses more than a streak of macho-like self assuredness, a personal trait spiced up by a devil may care attitude.

Controversial lifestyle
Living life to the full seems to be Elkann’s very raison d’etre, and he’s anything but wholesome and conformist – spectacularly hedonistic would be closer to the truth. The Agnellis’ haven’t been compared to the Kennedy’s for nothing, as drama and tragedy form an inherent part of both families’ history.

Elkann has had his fair share of media attention, and not always for good reason. One of the most media friendly episodes in the trials and tribulations occurred in 2005 in Turin, when a night out ended in Ospedale Mauriziano hospital’s A&E ward, following a near fatal overdose brought on by a lethal cocktail of cocaine, heroin and alcohol. Much to the delight of the gossip press, a gaggle of transvestites was revealed as Lapo’s fellow revellers. The hostess of the scandalous party, and the individual who called the ambulance in the morning, was the 52 year old transgender owner of the house, Donato Broco, or as she’s also called, Patrizia.

As one would imagine, the drama threatened to blemish not only the society boy’s status as one of the world’s ultimate playboys, but also the very reputation of the Agnelli name.

Fashion flair
Elements of the style press adore Elkann, and there’s no end to the gushiness directed to the man’s dress sense. Elkann has even acquired the nickname, Lapo of Luxury. Being showered with compliments, Elkann’s bagged enough style awards to fill a Fiat Punto to the brim. Not only has he been deemed an official GQ style icon, he was also named Dandy of the Year in 2007 by the online magazine, Dandyism.

The following statement accompanied the award: “We especially admire Elkann’s dandyish sense of superiority.” To continue the count of awards Lapo has received in relation to his get-up, he’s virtually been a permanent fixture on Vanity Fair’s prestigious Best Dressed List. So what’s all the fuss about? With his signature two-tone suits featuring impossibly wide lapels, coupled with shirts open to the navel or thereabout, many say that Elkann looks more Willy Wonka than the ultimate Dandy, Beau Brummell.

Then again, one doesn’t have to look hard to find that Vanity Fair’s best-dressed list rate bank balance and social status higher than true sartorial panache. Since fashion takes centre stage in Elkann’s life, we’ll linger on the subject a little longer. Any fashion flair Elkann possesses didn’t come from nowhere. Significantly, the almighty fashion designer Diane von Furstenberg, who pioneered the jersey wrap dress in the 1970s and is still considered one of the fashion world’s greatest names, is Elkann’s aunt.

Lapo in business
Elkann tends to attract attention for anything but business-related matters, but his CV is not devoid of professional undertakings. His education took place in England and France; the boarding school he attended was located in the French Alps, and his years there were followed by studies at the Lycée Charlemagne in Paris. Thereafter, he enrolled at London Guildhall University.

The most notable segments of his career include tenure in 2001 as the personal assist- ant to Henry Kissinger, followed by a stint at Ferrari and Maserati – one of Fiat’s subsidiaries – in the role of marketing associate for the two awe-inspiring car manufacturers. In 2003, Lapo became Fiat’s Director of Marketing. While working in this position, he’s been credited with coordinating the reinvention of classic car models such as Fiat Punto and Fiat 500, as well as reviving the “Cinquecento,” the compact Fiat model forever immortalised in the landmark Fellini film, La Dolce Vita. Moving on to work further on the promotional side of the business, Elkann went about printing Fiat logos on everything from t-shirts to skiwear, snowboards and licensed luggage.

Elkann’s active involvement in Fiat didn’t last long, and in 2005 he resigned and somewhat vanished from the scene. His next venture had nothing to do with automobiles – instead, he lent his creativity wholeheartedly to sunglasses. Established in 2007, Elkann introduced his new company with enthusiasm. “Since a brand must start with a vision, what better way is there to introduce that vision than with sunglasses,” noted the budding designer. The brand journey began with three models of sunglasses, one of which was made of carbon fibre, the very material used to construct Elkann’s late grandfather’s famous boat, Stealth.

Today, the brand is best described as a lifestyle name as it encompasses a clothing line as well as a range of accessories and a newly launched “tailor-made” ski range, produced in collaboration with the two ski companies, Bstripe and Blossom. Surfacing at about the same time in 2007, another brainchild of Elkann was born – Care Label, a line of premium denim. Defined by the lack of labels, the jeans are consciously created in an anonymous way as to allow the wearer to leave the ultimate mark and make the garment his or hers own. Indeed, Elkann seems to have learnt his lesson from the logo mania he employed during his days at Fiat. Running the project alongside Elkann is the designer and denim industry insider, Leopoldo Durante.

The future of Fiat
Elkann’s heart is clearly not in the family business. Fairing a lot better in the challenge to take Fiat forward is Lapo’s brother, the altogether more reliable and serious-minded John “Jaki” Elkann. In April 2011 it was announced that the industrialist had stepped in as Fiat’s new chairman, replacing Luca Cordero di Montezemolo. The appointment of John Elkann, 36, makes him the youngest chairman of the company that was founded by the Elkann brothers’ great grandfather, Giovanni Agnelli, in 1899 as Fabbrica Italiana di Automobili Torino. John Elkann’s taking an active part in the company will no doubt plant a seed of hope that the dynasty is on the right track, and in the right hands.

Not to be outdone however, Lapo too looks in contention for a top-seat with Italian sports car manufacturer Ferrari. Rumours are snowballing that Luca Cordero di Montezemolo will bestow the younger sibling with the position of chairman, depending on how his own political aspirations fare. This would make the Elkann brothers two of the most influential people in the Italian automotive industry, cementing the revival of their family’s long-standing business success. It would also no doubt ruffle the feathers of the CEO Amadeo Felisa and vice chairman Piero Ferrarii – but then, when has anything Elkann achieved been done through orthodox means?