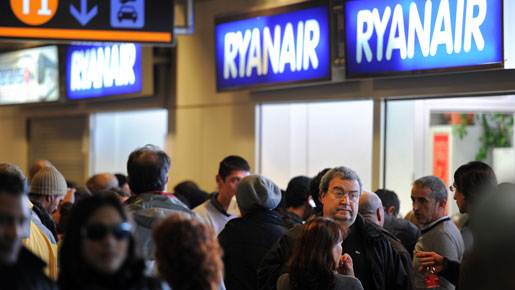 Michael O’Leary said fares would rise particularly in Ireland, where he expects them to be up at least 10 percent. He thinks rivals will also have to raise prices because of increasing airport charges.

“Across Europe I expect fares over the coming 12 months will be flat,” O’Leary said, though he hoped they would rise.

Any rises would not mark a change in strategy of Europe’s biggest low-cost airline but were inevitable following last year’s steep cuts, he said.

“If we’re going to hit our targets, you can’t continue reducing [fares],” he added.

“I don’t expect to be cutting costs by 20 percent a year if growth is slowing.”

The global airline industry has been particularly hard hit by recession, though British low-cost carrier EasyJet has said it is on track to deliver a substantial profit improvement in 2010.

Ryanair in November announced an 80-percent rise in first-half profit while much bigger carriers are suffering huge losses.

O’Leary said he expected to continue cutting capacity in Dublin with a 20-percent reduction in peak summer flights but the airline would be able to expand overall, taking total passenger numbers to 73 million this year.

The growth will mainly result from Ryanair opening new routes in Italy, Portugal, Norway, Spain and Leeds Bradford in England.

The Ryanair news conference followed comments reported earlier which said Ryanair’s average fares could rise from the beginning of its next financial year in April after four years of decline.

O’Leary said the reduction in Ryanair services from Dublin Airport reflected rising costs there, but Dublin Airport Authority said in a statement the airline was cutting capacity for “its own reasons”.