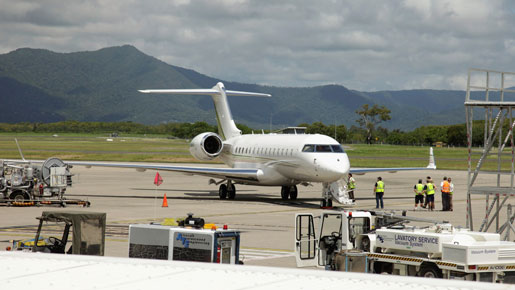 Executive self-indulgence or sound corporate practice? Business aviation – taking a private plane, with all its convenience, rather than joining the hordes at the check-in desk – is a discussion subject over which envy too often clouds reality.

Here’s a fact: while many companies seek to cut costs by sending their people by economy class or, where available, with low-cost scheduled operators, those who save their executives’ valuable time and sanity by investing in their own business aircraft – thus avoiding long airport check-in times, baggage delays and all the other traumas that beset the rest of us – outperform other companies by an average 11.3 per cent.

That figure comes from the latest research conducted by the London Business School, whose Kazuhisa Arimura comments: “Our statistical correlation analysis of a range of companies in different business sectors showed that private business aircraft are without doubt a sound investment that is easy to justify to shareholders.”

Another performance study, conducted in the USA by the Arthur Anderson consultancy, came up with a similar strong argument: “They found that among the nearly 800 companies that they studied, those that acquired business aircraft experienced a far greater sales growth in the years following the purchase than did those who stuck with regular flights,” says Brian Humphries CBE, the CEO of the Brussels-based European Business Aviation Association, adding, “Three years after purchase, aircraft buyers experienced an average sales increase of 8.5 per cent.”

The EBAA, which this year celebrates its 25th anniversary, promotes excellence and professionalism among its 270 members: “We aim to facilitate the application of best practice, as well as the highest standards of operational safety,” adds Brian Humphries.

Corporate aircraft operators include such efficiency hyper-conscious blue chips as Shell, Bosch, Volkswagen and Daimler Chrysler. They are joined in the EBAA by commercial operators who rent aircraft to companies that don’t have their own, along with aircraft manufacturers, airports, FBOs, service providers, national associations and other interested parties in an industry that in Europe now operates 2,850 turbo powered aircraft – around 600 of them corporate owned – out of a world business aircraft fleet of 24,652. More than half the present flight comprises jet aircraft and that proportion is growing as new generation corporate jets arrive.

Pop and movie stars, footballers, assorted eccentric millionaires and the like make up just three per cent of the business aviation user base. Says Brian Humphries: “Governments provide 20 per cent of the usage, with major corporations and large businesses taking 60 per cent and the rest going to mid and small-sized organisations who have realised that there are real cost benefits involved once you factor in the savings made on travellers’ time.

He adds: “The world fleet is growing by three per cent a year while that in Europe is showing five per cent growth, which means the numbers should reach 4,000 business aircraft in our market by 2016. But what is really impressive is the growth in usage, with jet traffic increased by nine per cent over the past year and total business aviation traffic, including turbo-props, up by nine per cent. We’ve reached the point where we now represent almost seven per cent of IFR traffic in Europe.

“Yet, thanks to having one of the youngest business fleets in the world, with an average aircraft age of less than 10 years compared to the world average of 18, we are clean and quiet and create less than one per cent of aviation emissions.

“The concept of the use of a business aircraft being seen as a corporate perk has been replaced by seeing it as a performance enhancer. Business aviation is today recognised as a highly effective business resource and an integral part of the modern air transportation system.

“The corporate jet more than earns its keep as a business tool that serves the user organisation’s strategic objectives and responds as necessary to tactical missions, all within the demanding constraints of fiscal responsibility.”

With their own, smaller, more comfortable and less pressured terminals, sited at both

major airports and smaller private ones, business aviation operators provide a highly efficient door-to-door style service, with secure car parking available just a few footsteps from the terminal: “There’s none of that endless walking to far-off gates,” says Paris-based businessman Yves Morbier, whose deal-making takes him to London and Amsterdam on a regular basis.

“Of course, there are check-in and security procedures to go through but these take seconds rather than minutes, sometimes dragging out into hours.

“On a recent flight using a regular commercial service from London Stansted to Berlin, the check-in desk did not open until two hours before the flight and the queue than took half-an-hour to subside. By that time, the line at security stretched almost out of the terminal door and I ended up very nearly missing my flight and having to run to the gate. I’d had no chance to grab a coffee, let alone take breakfast, and missed out on the duty-free shopping.

“To add insult to injury, my baggage was late arriving at the other end. As a result, I arrived at my meeting flustered and dazed, ready for a good sleep rather than work – and made a couple of bad mistakes in the negotiations.

“For a flight time of less than two hours I’d endured another three hours of messing around at airports – and that’s time I could have spent working or relaxing.

“What’s more, by being tied to big airports, the airlines take you from C to D when you want to go from A to B, so you have to factor in transfer times too.

“Just try making a multiple destination trip in one day by using scheduled flights. It’s a nightmare that doesn’t bear thinking about. You only need the slightest hiccup and you’ve missed your connection and the whole plan falls apart. But with a privately hired plane they wait for you if needs be and, weather and air-traffic control willing, will unfailingly get you where you want to be, when you want to be there.

“What’s more, most operators will even take care of your ground arrangements too, ensuring a car is on hand, waiting to whisk you straight off to your meeting or to the hotel they’ve pre-booked for you.

“The latest aircraft have state of the art phone and e-mail facilities, so you can work during the flight or hold meetings or discussions, knowing they are confidential and that nobody is ear-wigging on your conversation. The seats are big and comfortable and you don’t have the nightmare of screaming kids or a boorish stranger sitting next to you.

“On many planes, its even possible to access hold baggage while in flight – providing you are under 40,000 feet in the air – and that’s a useful convenience.

“My company most recently paid ¤4,000 an hour to hire a superb aircraft that shuttled eight of us from Paris to Manchester to Amsterdam and back to Paris, all in a day, without any hassle and at an overall cost that was competitive with regular business-class flights and certainly involved far less down time.”

No wonder operating companies like NetJet are experiencing such impressive gains right now. With 114 aircraft, this fast-growing business aviation company is now the European aviation industry’s 30th biggest operator of any sort and is expanding at 20 per cent year on year.

Comlux, ExecuJet and other operators offer whole plane charters of aircraft ranging from small Lear Jets right the way up to Boeing 737 and 787 models.

Gulfstream, Hawker, Falcon, Airbus and Bombardier are just some of the manufacturers today producing aircraft aimed directly at the business aviation sector: “We are now seen as key players in the European economy,” says Brian Humphries, “The sector is worth some US$7.5-billion and provides some 70,000 jobs, when you take all the support services into account.

“What’s more, unlike the commercial airline sector, we pay our own way. Business aviation takes no subsidies from the public purse, even building its own airports, like the ¤160-million new facility at Farnborough, in England. Without cost to the local taxpayer this project has created jobs and brought lots of money into the local economy.

“Using conventional flights, the time spent in the air is usually the shortest component of the journey. Business aviation enables that equation to be radically changed. Time, as they say, is money and time-saving is business aviation’s most powerful USP.”

So who uses business aviation most? Not surprisingly, the US, with some 17,000 planes, has more than half the world’s fleet. Canada has 888, followed by Mexico (800), Brazil (700), Germany (500) and the UK (420), in sixth place, replacing France, which has dropped to 10th, partly affected by the slow economy and partly because of the availability of highly efficient high-speed railway services.

The Russians are coming up fast, says Brian: “They have a lot of high net worth individuals who use private planes when they go jetting around Western Europe to seal their deals.

“The user base runs right across the industrial and commercial spectrum. Banks and other financial institutions are prominent among business aviation’s high profile customers – and they know a thing or two about making the best use of money.”