SAP AG shouldered aside its CEO of just seven months, surprising a market he failed to win over during his tenure and leaving investors wondering where the world's top business software firm heads next 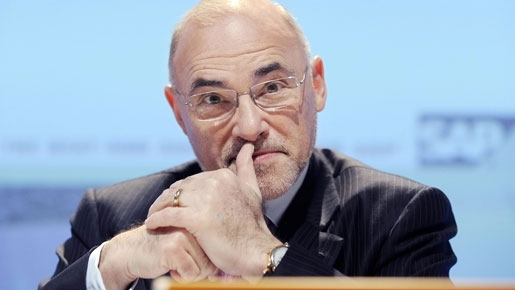 SAP announced Leo Apotheker’s abrupt departure on February 7, replacing him with immediate effect with a new management team expected to inject a clearer sense of direction at the helm.

“This step comes as an absolute surprise,” DZ Bank analyst Oliver Finger told clients in a research note. “[It] should increase short-term uncertainty about SAP’s future strategy” and hit the firm’s shares.

SAP said it was returning to its traditions of split leadership with Bill McDermott, head of the field organisation, and Jim Hagemann Snabe, product development chief, both already members of the SAP executive board, taking the helm.

McDermott, who is based at SAP’s US headquarters in southeastern Pennsylvania, played a lead role in sharply raising SAP’s share of the key North American market.

Snabe, a Dane, is a trained mathematician in charge of rolling out SAP’s Business ByDesign software suite after several missteps and delays.

It said the CEO’s departure was by mutual consent and did not elaborate on why Apotheker – an experienced, multilingual salesman who lives in Paris – had been eased out.

“The client base has lost confidence largely because of the maintenance issue fees,” said Yvonne Genovese, head of software analysis at research firm Gartner.

The software maker wanted to raise prices after 10 years of keeping them steady but customers complained the amount of services did not justify the planned mark-up, forcing SAP to back down and delay a decision on higher service fees.

Software licensing and maintenance fees account for the bulk of revenues at SAP, whose main competitors include Oracle and IBM.

Genovese said SAP’s patchwork of messages on cloud computing and software as a service among other issues lacked a clear, cohesive strategy.

“SAP is solid and successful in its basic business but innovations regularly fail, communication internally as well as externally is a catastrophe and that explains an extreme uncertainty on all levels”, the consultancy said.

Slower decisions?
By appointing new co-CEOs, SAP is now trying to right the ship in a move supported by Plattner, who at the board’s request will advise the newcomers on technology and product development.

SAP has a history of co-leadership to ensure a smooth transition from one CEO to the next, though it is not yet clear whether McDermott or Snabe will eventually become sole top executive or if a third person will take over.

Apotheker was named co-chief executive with Henning Kagermann in April 2008 and took over sole responsibility with Kagermann’s retirement in July 2009. He became the first executive unable to write software code to be elevated to such high office at SAP.

Genovese said both McDermott and Snabe had shown they were very capable, though “one worry is that the two new co-CEOs have never led … We will see how they work together.”

“We are concerned that the co-leadership might slow down the decision-taking process,” Merck Finck analyst Theo Kitz said.

Danish Jyske Bank struck a more positive tone, reasoning that the co-CEOs were well known by customers and investors.

“The net effect of the change of management should be a more visionary and clear communication towards the outside world,” said Jyske Bank, which kept its SAP recommendation at “buy”.

“Leo Apotheker has had from time to time a tendency to appear arrogant … which has made it more difficult to get his message across,” Jyske Bank said.

Apotheker was instrumental in SAP’s $7.5bn acquisition of business intelligence maker Business Objects, agreed in 2007 and completed 2008 – SAP’s only acquisition to date on this scale.

But his education in international relations and economics and subsequent career in management, consulting and venture capital set him apart from previous CEOs, who all had deep roots in computing, and marked a change in tradition at SAP.