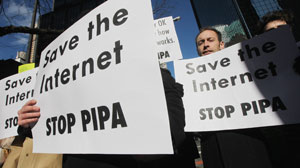 The Stop Online Piracy Act, SOPA, was an American bill introduced in 2011 by US Representative, Lamar Smith. According to him, SOPA was designed to prevent online piracy by imposing harsh penalties for using copyrighted content on the internet without the creator’s consent. The potential ramifications of the bill, however, may have far-reaching consequences both in the US and beyond.

Along with Representative Smith, other legislators in both the Republican and Democratic parties supported SOPA, including Representatives John Conyers and Bob Goodlatte. These Congressmen expressed concerns that intellectual property, created by Americans, could potentially be pirated by other individuals who would then profit from the work, without accrediting their source. Several corporations and trade associations supported the SOPA legislation, such as the Motion Picture Association of America (MPAA), the US Chamber of Commerce and various media companies. These organisations have lost a large part of their revenue over the past few years due to copyright infringement on the internet.

Under SOPA, the US government would be able to shut down any website that contains copyrighted material without the creator’s consent and penalties under the bill would extend to many internet users. Both the website owner and the individuals who viewed the content could be prosecuted. According to the bill, a person who streams an online video that infringes on copyright ten times in six months could face up to five years in prison.

SOPA in Europe would have a great impact. Many websites that are viewed or patronised by Europeans are based in the US and their operation would be greatly affected by the passage of SOPA. Europeans got a taste of this in January, when Wikipedia, went offline for 24 hours in protest of the bill. Neelie Kroes, the vice president of the European Commission, denounced SOPA, saying that passing the legislation would be equal to putting “speed bumps on the motorway” in an attempt to combat speeding.

The news that SOPA might be passed drew widespread protest from individuals and large corporations alike. Demonstrations were held in Washington, to draw attention to the possibility that SOPA could infringe on the First Amendment right to free speech. Other protesters claimed that the law would cripple several large websites that are simply unable to monitor the content posted on them each day. As public outcry grew, several companies, including Sony, EA, and Nintendo, all companies with extremely strong ties to the internet, withdrew their support for the bill.

President Obama withdrew his support for SOPA in the middle of January and a week later, the bill’s co-founder, Lamar Smith, said that he would no longer support the passage of the act, adding that he was postponing the bill, “until there is wider agreement on a solution”.