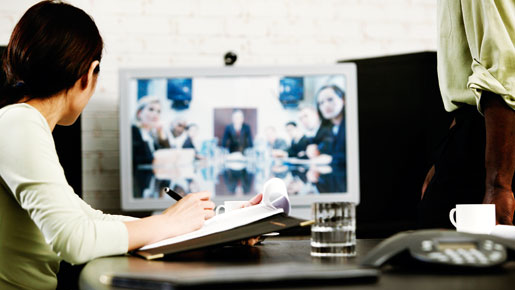 The trend towards video is closely linked to consumer demand. Skype recently announced that video accounted for 40 percent of calling minutes in the first half of 2010. If the cur- rent growth rate continues, we expect the 50 percent threshold to be crossed in 2011. Of course, this has a major impact on the net- work, with Cisco’s ‘Visual Networking Index Forecast and Methodology 2008-2013 White Paper’ stating that 90 percent of all consumer traffic will be video based by 2013 and will be the sum of all forms of video (TV, video on demand, internet, and peer to peer).

Converging video
Increased business value is derived from integration of video into a unified communications and collaboration (UC&C) environment; hence the ownership of visual communications is mi- grating from facilities to IT. Voice and video have many elements that are currently duplicated. Why silo the video offering when combining the two over time would result in operational and cost saving benefits?

“An added consideration is the fact that there is a growing demand for video to become mobile”, says Craig Levieux, Dimension Data and Converged Communication’s group gen- eral manager. “More and more executives need to be able to participate in telepresence sessions or video conferences from airports, hotels, and their holiday homes. This calls for high levels of inter-operability among types of video, including PC clients, desktop appliances, conference room video conferencing, and immersive telepresence.

“It also calls for video to be managed as an integral part of the entire business operation. In which case, it needs to be managed coherently with all the other technology that supports the business. That responsibility falls squarely into the lap of IT.”

Video as the new voice
If users have their wish, video will overtake voice as the primary real-time communication channel within a few years, exerting pressure for the management of video to move from a niche focus to an approach suitable for an integrated communications estate. To achieve
this, two areas require the attention of communication leadership within organisations and of the industry as a whole. The first is ease of use. The second is on-demand inter-organisational video calling with quality of service. The video industry can certainly learn from the discipline of the voice industry in this regard.

Compared to voice, Internet Protocol (IP) video is in its infancy from an inter-organisation calling perspective. In general, every telephone can call every other telephone in the world. This is accomplished through careful design and im- plementation in many dimensions.

There is an addressing scheme (dial plan) that is agreed and consistent worldwide, enabling anyone to call anyone else. Signalling protocols are agreed and well understood, enabling calls to cross network boundaries, and diverse terminals and networks to inter-operate reliably. Significant investment and attention is paid to quality of service, call admission control, and congestion control to ensure reliable call setup and good, consistent quality for the duration of the call. Many of these elements are missing for IP video.

In theory, ubiquitous inter-organisation video is possible using the internet for trans- port but, because of security issues, organisations often restrict access and only open up paths bi-laterally. This is a model that doesn’t scale. There is also no quality of service guarantees, rendering critical business interactions such as executive meetings and sales presentations too risky for serious consideration.

“There’s also some distance to go on resolving issues of inter-organisational quality of service,” says Shaun Struckmann, Dimension Data’s solutions development manager for visual communications. “To get quality of service, a network has to be set up for it, agreement must be reached on, amongst other things, the addressing schemes, a regime for inter-carrier connection, and charging. To get to that point, there needs to be much closer co-operation among carriers, vendors, and service providers. At the moment, none of us have all the answers to all the challenges.”

Still…
Struckmann believes, however, that better planned and more accurate implementations of video would resolve a lot of the current reputation video has of being difficult to use and lacking in acceptable quality. “A managed service can help organisations understand how video should fit into the network and what support to give IT in order to provide the best possible operating conditions.

“That said integrators and managed services providers should be chosen with care. They must be equipped to help implement video as a consistent part of a converged network, making sure that the video infrastructure works seamlessly and is at least easier to use than is the case now,” says Shaun. The next phase will be to stabilise the existing network, standardise video equipment and video usage methodologies, and maintain and optimise legacy equipment so that it works seamlessly with the new video additions.

A case in point
One of Dimension Data’s long-standing financial services clients, a global organisation whose executives travel extensively, began to use telepresence video conferencing some 18 months ago. So successful has it been in terms of cutting travel time and cost as well as time to execute decisions, that the company has committed itself to the considerable cost of another six units.

Also, the company’s culture and business model are based on collaboration. Restricting video access to the top echelon of executives only limits collaboration on day-to-day activi- ties at other levels of the organisation. Lack of ubiquitous video has therefore become a strategic threat to the company.

To address these issues, Dimension Data has offered a managed video service that moves the management of video from facilities to IT, treats video as part of UC&C, and integrates video into the converged network. Attention will also be given to integrating video with Microsoft Office Communications Server and, as technology developments permit, making video a fundamental part of the company’s UC&C.

At hygiene level, all rooms fitted with video equipment will be upgraded and stand- ardised, and Microsoft Exchange Server used for the scheduling of bookings and mainte- nance. Last but not least, the company’s helpdesk staff will be trained to provide support to video communications as part of their support of the converged network.

For contact details in your region please visit: www.dimensiondata.com/globalpresence