Knowing that charity begins at home

Jane Bordenave looks into the work being carried out by Oleg Deripaska, the Russian businessman who is improving prospects for Russiaís children and young people through charity Volnoe Delo 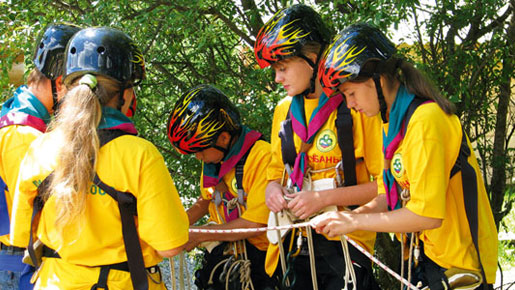 The charity has six programmes currently running in the areas of: Computers for Schoolchildren, New Generation Schools, New Generation Workers, CREDO student loans, Support for Russian Science and supporting two faculties at Moscow State University, which it also helped to found. Support for study and science goes beyond philanthropy and good will through these initiatives, the organisation and Mr. Deripaska are securing Russia’s position on the world stage as a leading centre of science and engineering, as well as increasing the prospects of its young people.

The Computers for Schoolchildren project is the largest of its kind, not only in Russia, but in the world. In the three years since it was established, it has benefited over 65,000 pupils and 2,500 teachers across eight of the country’s regions and these numbers continue to grow. The initiative is run in partnership with Intel, Microsoft and ASUS, although it is overseen by Volnoe Delo, and aims to eliminate the digital disparity between the federation’s large cities and more remote regions. The project provides pupils in participating schools with ASUS Eee PC netbooks and their teachers with high performance laptops. Both the teachers’ and the children’s computers are equipped with specialist software that enables the study of Russian language, mathematics, art and nature, among other subjects. This cutting edge technology has revolutionised the interaction between teacher and student, dramatically improving their learning experience.

The scheme goes beyond the delivery of the technology, also providing specialist training to over 1,600 primary school teachers so that they are able to take full advantage of this investment. There is also a special portal that helps to improve staff training, as well as identify the need for new learning content. The programme has been such a success that it has attracted attention from many other countries, which are looking to emulate it in their own education systems.

The New Generation Schools programme takes a more comprehensive approach to education, with a focus on the whole of state primary schooling in Russia. Covering 41 schools in 14 regions, the project is in the process of creating a totally new educational structure that is unique to the country. The system is based on a model for a new wave of teachers who are capable not only of passing on the very latest knowledge to their pupils but, most importantly, the ability to learn throughout his or her life. Educators participating in the scheme have already devised 18 original play and study programmes, which are supported by 39 specialised summer camps covering subjects like ecology, local history, political and business games and expeditions. Developing an environment that helps to best deliver a quality education is also fundamental to the project and, as such, the foundation supports computerisation, broadband internet access, local school networks, school websites and subject rooms through this initiative.

Volnoe Delo’s support of learning does not only cover compulsory education; in 2000, the charity established the Support for Russian Science programme in conjunction with the Russian Science Support Foundation and the Russian Medical Support, both of which count Mr. Deripaska among their founders. As part of this initiative, the foundation awards 1,100 grants annually and supports prizes for young scholars at Moscow State University, as well as the Russian Academy of Sciences and the Russian Academy of Medical Sciences.

The funds provided have helped support the best staff in Russian science and medicine, enabling them to focus on continuous research. It has also helped to involve promising young Russian scholars in these fields of study, who had previously gone abroad to carry out their work. As well as working to fund research and expertise at higher education and research level in a general manner, Volnoe Delo has, under this programme, provided support for research into the early detection of breast cancer at Moscow state University’s Faculty of Fundamental Medicine. Not only will this research benefit the general population, but the unit is also offering preventative check-ups for students and staff.

The charity is also involved in areas of Moscow Sate University’s teaching outside of the field of science; it has created and provides continuous support for the Faculty of Economics and the Graduate School of Public Administration. These two elite departments train government employees and economics analysts to international standards, further cementing Russia’s place as a global player. 458 bachelors and masters degree students were enrolled in these faculties for the 2009/2010 academic year, with 127 graduating this June.

The foundation’s participation in education also extends beyond academia and into vocational training. Through the New Generation Workers programme, it has played an integral part in the modernisation of primary and intermediary vocational institutions. This remodelling of vocational establishments aims to satisfy the needs of contemporary manufacturing methods. The scheme involves 18 training schools from 11 regions and has trained over 3,000 personnel and technicians to the highest skill levels.

What is evident, through all these programmes and initiatives is that Mr. Deripaska is committed to improving Russian education and specialisation, an ambition that he realises through Volnoe Delo. Through such public-private partnership, Russia is ensuring that it has the skills base and work force to support key industries such as those Mr. Deripaska is involved in through his company, Basic Element. Investment of this type is invaluable to any country and, by ensuring the education system has solid foundations and adequate funding throughout, he is ensuring the future economic stability and progression of the federation. It is both a worthy cause and a necessary one and, through his commitment to this mission, Oleg Deripaska is ensuring success for his company and for his country.