Europe’s post-recession recovery has hit a roadblock as German economic growth unexpectedly ground to a halt in the final quarter of 2009, though France made up for some of the damage. The news comes at a hard time for Europe’s single currency bloc as governments struggle to sort out Greece’s debt difficulties and contain financial […] 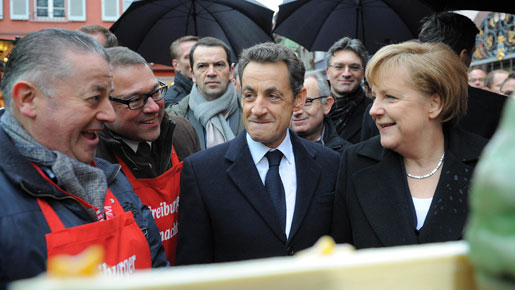 Europe’s post-recession recovery has hit a roadblock as German economic growth unexpectedly ground to a halt in the final quarter of 2009, though France made up for some of the damage.

The news comes at a hard time for Europe’s single currency bloc as governments struggle to sort out Greece’s debt difficulties and contain financial market fears that have driven the euro lower and government bond yields higher.

German GDP was flat in the final quarter of last year, the statistics office said, following expansions in the two previous quarters that ended a year-long recession.

Growth of 0.2 percent had been forecast.

France,the Eurozone’s second largest economy, fared better in the same period with a GDP increase of 0.6 percent versus the third quarter that, unlike Germany, was driven in large part by healthy consumer spending.

That meant France maintained its recovery pace, after a GDP rise of 0.5 percent in the third-quarter.

Those figures followed confirmation that Spain, one of the hardest hit by the end of housing booms across the globe, stayed in recession with a fourth quarter GDP dip of 0.1 percent versus the previous three months.

“The Eurozone growth engine has taken a break in the fourth quarter but it should return soon,” ING bank economist Carsten Brzeski said.

“Today’s numbers, however, were a good reminder that recoveries can not only be bumpy but also capricious.”

Part of Europe’s problem is that it needs a reasonable pace of economic growth to help limit the surge in sovereign debt caused by the recession of 2008-2009.

Forecasters for now believe that the Eurozone will have a weaker recovery than the US this year, just as it fell harder than the US in 2009.

Devilish details
In France, where the recession knocked 2.2 percent off GDP in 2009 as a whole compared to a five percent hit in Germany, the end of year news was marginally more positive than expected, once again as a result of domestic demand.

That helped to offset the damage from tumbling investment, a major casualty of recession, which fell 1.2 percent in the final quarter versus the preceding one and dropped 6.9 percent over 2009 as a whole. “This is good news, which contrasts with the very disappointing figures out of Germany,” said Jean-Louis Mourier, economist at Aurel BGC. “The main support came from consumption and stocks.”

ECB President Jean-Claude Trichet has been warning for some time that the recovery in Europe will be “bumpy” and at times “chaotic”.

Severe winter weather at the turn of the year may well blur the picture further. Economists say that could hit GDP in the first quarter but that much of such immediate losses are usually made up in the ensuing months.

German Economy Minister Rainer Bruederle has already said growth in the first quarter of 2010 could be near zero.