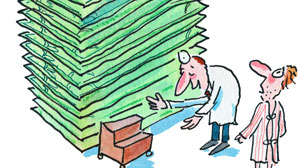 Christopher Richardson is used to solving his own problems. It’s when he’s forced to rely on his customers that his troubles really start.

The 49-year-old runs a freelance timber frame design and engineering business from his home in Suffolk, south eastern England. He’s proud of his work, but says his customers are increasingly using underhand methods to delay or avoid paying their bills.

It’s a headache across Europe. European companies wrote off a staggering €312bn for unpaid bills last year, according to Swedish-based credit management services group Intrum Justitia. That is more than the Greek, Irish and Portuguese EU/IMF bailouts combined, and an increase of four percent from €300bn in 2010.

“Most customers push their luck,” says Richardson by telephone. “They wait until you’re absolutely desperate for the money and then say they have to knock something off the bill because of some gripe – and you’re in no position to argue.

“You’ll take a 25 percent hit because some money is better than none. That is very common.”

Late or non-payment for services has long been a problem for Europe’s smaller companies – especially in businesses such as the cut-throat world of supermarkets, which are renowned for driving hard bargains and squeezing suppliers.

But the economic crisis has brought the situation to a head as small firms – the supposed motor of economic recovery – falter, and highlight a widening rift between powerhouse Germany, which is seeing written-off debt decline, and large economies such as Britain, where debt write-offs have surged. Experts worry that the mountain of unpaid bills, coupled with the euro zone crisis, surging food and energy prices and stringent terms for bank credit, will drive up insolvencies and job losses, hamper cross-border trade and snuff out any recovery.

“It suggests that there is another wave of illiquidity which is about to crash upon us,” said Stephen Lewis, chief economist at Monument Securities.

“If there’s a downturn or a shock – maybe that a generalised debt crisis in Europe might provoke — then it would crystallise a lot of these difficulties and send the whole credit structure toppling.”

Debt-crippled euro zone countries such as Greece and Portugal, as well as Spain and Italy, have seen late payments rocket. Greek public authorities, dealing with huge budget cuts, take around 108 days to pay a bill compared to 65 last year.

But among the big European economies, Britain stands out as one of the worst offenders. While some payment times have edged down slightly in the past three years, the amounts involved seem to be bigger. British companies now lose 3.2 percent of all the money they are owed, up from 1.9 percent in 2008.

More than half the British companies surveyed fear for their survival because of late payments; 65 percent say the problem is hampering expansion.

Bacs, a not-for-profit organisation behind the clearing and settlement of UK automated payments, says smaller firms are owed a hefty £26bn after the number of overdue payments soared by almost 40 percent last year.

“Around 25 percent of all bankruptcies in Europe are due to late payments,” says Intrum Justitia spokeswoman Annika Billberg. “The consequences of companies being unable to get paid are that they are unable to expand or even keep staff.”

The UK-based Forum of Private Business (FBP), which advises small and medium-sized enterprises (SMEs), in 2010 exposed Molson Coors – the brewer of brands such as Carling and Grolsch – on its “Hall of Shame” for stretching payment terms to over 90 days.

Since then, it says, there has been a surge in complaints about late payments crippling small businesses already battling surging inflation, rising taxes, the deepest public sector spending cuts in 60 years and a flagging economy.

“Since the last entry, we have been approached by numerous small business owners reporting late-paying companies,” says Chris Gorman, a spokesman for the FBP. “But they’ve either been unable or unwilling to provide proof.”

Small companies shy away from providing the email chains and documentary evidence needed to name culprits for fear of losing clients or being labelled industry troublemakers, he said: that risks further undermining already stretched businesses.

“They won’t even anonymously provide evidence because they are terrified that the trail will lead back to them,” says Gorman. “It’s really a tricky one.”

Squandering goodwill
Nobody doubts the value of smaller businesses. In Britain alone, they provide almost 60 percent of jobs and account for half the country’s economic output. Prime Minister David Cameron said in March he hoped they could provide the spark to light a sustainable economic recovery.

In an effort to combat late payments, the European Parliament last year approved a 30-day deadline to pay bills in the public sector and a 60-day deadline in the private one. But there are get-out clauses. Deadlines can be extended if “expressly agreed” and provided it is not “grossly unfair” to the creditor. In the UK, organisations such as the FBP, business lobby group the Confederation of British Industry (CBI) and the company director standard-bearer, the Institute of Directors (IoD), are urging corporates to sign up to a so-called Prompt Payment Code. Under the code, companies agree to pay suppliers within the terms agreed, without attempting to retrospectively change terms on “unreasonable grounds”, and are expected to encourage lead suppliers to adopt the code throughout their own supply chains. But as it is not legally binding and relies heavily on goodwill, it is often ignored by big business – especially those that are hoarding cash. Many companies are stockpiling reserves – sometimes using smaller suppliers as their creditors — to help cushion against another downturn. According to Thomson Reuters data, European companies outside the financial sector, where cash is often held as a regulatory requirement, are stashing cash and short-term investments worth $1.44 trn – a 20-year record. “Everyone is trying to conserve liquidity at present and those who are strong can do this more effectively than those who are weak,” notes Monument Securities’ Lewis.

The most common complaint is about abrupt extensions of payment terms, although some firms also stand accused of simply not paying up in full and expecting creditors to swallow the difference. Underlining the uphill battle faced by suppliers, large companies say they too are feeling the squeeze. Molson Coors says total profits earned in the brewing industry have shrunk by around 30 percent over the last five years. It needs to remain competitive, the company says: so its supplier payment terms are now “more consistent with industry standards.”

“Looking ahead to the long term of the beer market, is vital to the sustainability of the category and will ultimately benefit our consumers, customers and, of course, our suppliers,” says David Heede, finance director of the UK and Irish division.

There are legal options. UK businesses battling to retrieve money owed can resort to the Late Payment of Commercial Debts Act, which allows them to claim interest on outstanding bills. But this is a route taken only by those who are prepared not to work for the same companies again.

“Few SMEs dare to use the legislation on regular clients – particularly if the client is their only client, as is often the case with supermarket suppliers,” says the FBP’s Gorman.     Smaller companies also often simply lack the time and resources to take on their debtors.

“They know you don’t have the resources,” says Richardson from his home in rural Suffolk.

“You take it on the chin, promise yourself never to work for them again and move on to the next guy, who is no better.