London vs the eurozone

Despite a call for unity from the eurozone’s unofficial leaders Merkel and Sarkozy, British Prime Minister David Cameron has vetoed their EU treaty, dividing opinion and possibly taking power away from London 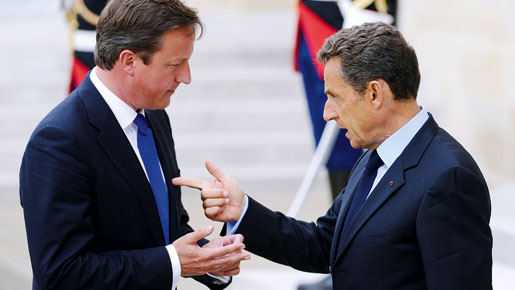 Ever since the United Kingdom joined the European Economic Community in 1973, after the French withdrew Charles de Gaulle’s veto of its membership, Britain’s relationship with the European integration process has been strained. The British are reluctant Europeans, for historical and cultural reasons.

For centuries, British foreign policy strove to avoid permanent European entanglements; but, most importantly, it aimed to prevent a single continental power from achieving dominance – especially if that power happened to be France. In the meantime, the British colonised large portions of the globe. Later, after the sun set on their empire, they tried to maintain a “special relationship” with the United States. Joining the European Union was not an affirmation of belief in European integration, but rather a reluctant recognition that the transatlantic strategy had run its course. British public opinion concerning the EU has since remained lukewarm, at best.

The thin red line
In recent years, having opted-out of the single currency and the Schengen area (which allows Europeans to cross borders without passports), the UK has distanced itself from important EU initiatives. Nonetheless, Prime Minister David Cameron surprised everyone by vetoing a new EU treaty on December 9 – a first for the UK since joining the Union – leaving the other 26 member states to press ahead with greater fiscal integration on their own. More surprisingly, the negotiations broke down over arcane details of financial regulation.

For example, Cameron wanted to strike a “red line” through the proposal to subject the planned Deposit Guarantee Scheme Directive to the Qualified Majority Voting procedure (meaning that no member state would have veto power). Cameron also objected to the requirement that third-country financial firms in London without business in other EU states be required to hold a “single passport,” which would enable them to operate in any member country, but would also require them to submit to Europe-wide regulations.

These points are not entirely insignificant, but I would not care to explain them to a meeting of ordinary voters puzzled about Britain’s new European policy. So why has financial regulation become the unlikely casus belli between the UK and its partners?

Old scores to settle
The explanation is partly political. Cameron’s Conservative Party includes members who have been spoiling for a fight with the EU for a long time. For them, any excuse will do, and EU Internal Market Commissioner Michel Barnier has provided them with ammunition by pursuing what many see as an excessively restrictive regulatory agenda. When horse-trading for Commission jobs took place in 2009, former UK Prime Minister Gordon Brown was warned of the danger of allowing the French to hold the Internal Market post. But he chose instead to bid for the EU foreign-policy job for his Labour Party ally, Baroness Ashton.

When Barnier was appointed, French President Nicolas Sarkozy described it as a “defeat for Anglo-Saxon capitalism.” And so it has proved – though perhaps not in the way he envisaged.

But beneath the politics, there are other substantial conflicts between the UK and its continental neighbours. Barnier favours European directives that impose uniform rules for all member states – so called “maximum harmonisation” measures. Previously, EU directives tended to impose minimum standards, which individual countries could supplement if they wished. They could outlaw initiatives that the UK holds dear, such as new rules to ring-fence retail banks’ subsidiaries and impose higher capital requirements on them. The governor of the Bank of England, Mervyn King, has voiced his anxieties on that point.

All for one and none for all
British officials are also deeply concerned about measures that would oblige clearinghouses that transact their business primarily in euros to be located within the single-currency area. Indeed, the British government was already taking the European Central Bank to court to challenge that policy before the treaty veto. They may have a point; arguably, the ECB’s proposal is inconsistent with single-market principles.

The key point of contention, however, is the pan-European Financial Transactions Tax, which the European Commission proposed with support from both Sarkozy and Angela Merkel. From a UK perspective, the FTT is highly unattractive. Between 60 and 70 percent of the revenue would be raised in London, yet the EU would spend most of the money to shore up eurozone finances.

For Britons, this idea stirs sentiments akin to what Germans might feel if the EU proposed a new tax on liverwurst, with the proceeds to go into the central pot. They also point out that, unless an FTT were agreed globally, financial companies would quickly migrate from London to New York.

The 27th state
This is Cameron’s best argument on the financial front. But he did not deploy it strongly, for the simple reason that tax policies in Europe are still subject to the unanimity rule. In other words, Britain can block the proposed FTT without a special protocol. This lends weight to the argument that Cameron’s veto was essentially a political move, intended to bolster his domestic support.

That is a big gamble, given that the UK now appears to be shuffling towards the EU exit. Certainly, the new status quo looks unsustainable, with 26 countries moving towards greater integration while the 27th remains aloof. How will financial firms react? Will they be pleased that London has stamped its collective foot, even though Cameron’s regulatory demands were not accepted? Or will some simply begin to contact real-estate agents to line up office space in Paris or Frankfurt?

The game – London vs the eurozone – has only just begun. It will make for fascinating viewing in the months and years to come.