Slovak president Ivan Gasparovic appointed Jozef Makuch as new central bank governor recently, a position that gives him a seat on the European Central Bank’s governing council. Makuch, 56, who previously served as a central bank board member and the head of the country’s Financial Markets Authority, replaces Ivan Sramko, who turned down an offer […] 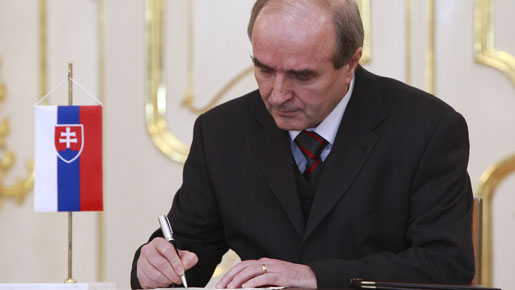 Makuch, 56, who previously served as a central bank board member and the head of the country’s Financial Markets Authority, replaces Ivan Sramko, who turned down an offer to serve a second five-year term.

All Member State central bank chiefs hold a vote on the ECB’s governing board, which decides on monetary policy.

Makuch will lead the bank in times when the heavily export-reliant economy is recovering from its deepest downturns ever, with the European Commission expecting Slovaks to emerge from the crisis as the EU’s fastest growing economy this year.

“There are challenges for the bank, the law on the central bank has changed and we have to implement it,” Makuch said after his appointment.

Slovakia adopted a law last year cutting the number of board members to five from the current eleven – one governor, two vice-governors and two board members.

The approved legislation also lifts the limits on the number of appointments to various board positions and slaps a two-term limit on the posts of governor and vice-governors.

Makuch, Slovakia’s fourth central bank governor to date, said key challenges for the future include implementation of the regulation rules of the financial sector as drafted by the European Union.

Makuch was originally not considered a frontrunner for the job with analysts saying he was little-known to markets and the public.