The Frankfurt Stock Exchange and NYSE Euronext are engaged to be married, and providing nobody declines at the alter, the move will create the world’s largest global exchange platform. So who is going to be the biggest player in a deal worth €6.2bn? Step forward Reto Francioni 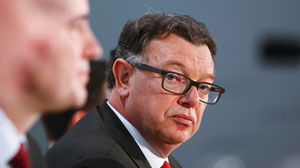 If there is a common thread running through the nineties, noughties – and now the teens – insofar as the world’s major stock exchanges are concerned, it has been the almost pavlovian pursuit of deals with rivals – prompted in large part by the fear of being swallowed up by other competitors and the need to shave costs and preserve margins in response to the emergence of leaner, fitter and often meaner alternative electronic trading platforms.

And so the latest chapter of this form of corporate musical chairs is playing out as Germany’s Deutsche Börse (owner of the Frankfurt Stock Exchange) and New York Stock Exchange parent, NYSE Euronext, seek regulatory approval to merge their operations. It follows the Singapore Exchange’s (SGX) offer last October for ASX Ltd, which runs the Australian stock market, and the London Stock Exchange’s agreement in early February to merge with Toronto Stock Exchange operator, TMX Group.

NASDAQ OMX Group, parent of the NASDAQ Stock Exchange, may yet spoil the Deutsche Börse-NYSE Euronext party by launching a bid of its own for the latter. But that’s a deal for another day, if a deal at all, given the likely major antitrust concerns.

The Deutsche Börse-NYSE Euronext marriage, giving Deutsche Börse 60 percent of the combined entity, will see the creation of an organisation with a US market share in  futures similar to that of Chicago-based CME Group and ahead of Chicago-based based CBOE Holdings in the US options market. In Europe, it will control more than 90 percent of equity and index derivatives.

Frankfurt Stock Exchange aside, Deutsche Börse also has, among other operations under its wing, trading services providers, Clearstream and Eurex Clearing, as well as US – based derivatives operator International Securities Exchange Holding.

Assuming the deal is completed the combined group will have 2010 combined net revenues of €4.1bn/US$5.6bn, and 2010 EBITDA of €2.1bn/US$2.9bn, making it the world’s largest exchange group by revenues and EBITDA.

Breaking the numbers down, the enlarged group – again based on 2010 revenues – will earn approximately 37 percent of total revenues in derivatives trading & clearing, 29 percent in cash listings, trading & clearing, 20 percent in settlement & custody, and 14 percent in market data, index & technology services. While the organisation’s official name has yet to be decided it will have dual headquarters in Frankfurt and New York – the one-tier board comprising 15 directors (nine designated by Deutsche Börse, six by NYSE Euronext) plus the Chairman and CEO.

Deutsche Börse’s CEO, Reto Francioni, will become chairman of the enlarged group, with responsibility for group strategy and global relationship management, while his opposite CEO, Duncan Niederauer, will lead an Executive Committee with an equal number of current Deutsche Börse and NYSE Euronext executives.

The deal’s backers claim they can achieve €300m ($413m) worth of cost reductions within three years of the deal’s completion – expected by end-2011 – largely from combining the two companies’ technology systems and back-office operations.

Though no specifics have been forthcoming regarding job cuts – not least because neither party wants to play its hand yet as regulators on both sides of the Atlantic run a fine toothcomb through the minutiae of the proposed deal –  one figure already mentioned (via an unidentified source to the New York Times) is that it will be less than 1,000, but with 90 percent of the cuts set to occur in Europe.

Francioni, who has said the combination makes sense, because both companies will benefit from ‘unique growth opportunities and synergies’, will further enhance his cost cutting credentials. Beneath the headline numbers though a different story emerges with New York set to become the decision-making centre over the longer term, despite the current 60-40 ownership split in Deutsche Börse’s favour.

While Francioni will have the mandate to call board meetings, determine the agenda and be responsible for initiating and developing overall group strategy, a filing with the US SEC on February 15 indicated that after the initial term – set to end in 2016 – his role will become that of a non-executive director with previous responsibilities due to terminate. In many ways the deal fits in well with Francioni’s mindset – the 55 year old Swiss native historically having tended to adopt a more understated, lower profile persona and become best known for cost cutting by shifting jobs to lower paying locales.

Niederauer, on the other hand, built his reputation over a 22-year period in the cut and thrust of the Goldman Sachs corporate jungle and has been widely credited with modernising the NYSE since he became CEO in December 2007, by placing greater emphasis on technology, as well as derivatives business. Longer term, it is likely that Niederauer will not only become the major player but also that NYSE’s ‘modernising culture’ will likely have an imprint on its German counterpart.

For Francioni, his current stint at Deutsche Börse is his second, having previously been deputy CEO from 1993, with responsibility for the German cash market.

Appointed deputy chairman of the board in 1999, he then fell out with long time boss Werner Seifert over strategy – including Seifert’s ambition to buy the London Stock Exchange – leading to Francioni leaving in 2000 to head-up Consors Discount Brokers in Nuremberg.

Fast forward to December 2004 – when Seifert launched a hostile £1.3bn 530p per share bid for the London Stock Exchange – and a chain of events would be set in motion culminating in his ouster five months later and Francioni’s appointment as his replacement nine months later. Leading the attack on Seifert at the time was London-based hedge fund and famed corporate hornet’s nest stirrer, TCI (a then five percent Deutsche Börse shareholder) which claimed the 530p offer exceeded ‘the potential benefits of this acquisition’. Instead, TCI wanted Deutsche Börse to launch a buyback of its own shares.

TCI and other shareholders were also miffed that there had been no pre-bid consultation with them and were worried at the prospect of seeing their holdings diluted. Deutsche Börse countered that it was convinced its contemplated cash acquisition of the LSE was in the best interests of its shareholders and the company. In a letter to then chairman, Rolf Breuer, Christopher Hohn, a TCI partner wrote: “We intend to exercise our rights in full at the next shareholders’ meeting to vote against the existing supervisory board members’ re-election.”

In a letter in April 2005 Seifert issued a stinging rebuke to Hohn, stating he considered Hohn’s actions damaging to the company, its owners, customers and employees. Yet in what amounted to one of the biggest victories for shareholder activism in Germany in years, Seifert was gone the following month – falling on his sword before he was pushed.
Breuer, whose role along with that of the supervisory board, was to monitor Seifert’s strategy, then announced he would be gone by the end of the year. Meanwhile, the LSE bid became but another footnote in Deutsche Börse’s corporate history – previous discussions in July 1998 regarding a strategic alliance, which ultimately turned into full blown merger discussions, ultimately being canned by the LSE in September 2000.

Yet, like Seifert, Francioni has never been afraid of the ‘big deal’, even if his modesty contrasts sharply with Seifert’s occasional brusqueness. Also, like Seifert, he has had to take disappointment on the chin – not least after having lost out to the NYSE in the takeover of Euronext in May 2006, as well as two reported earlier sets of talks of NYSE Euronext itself that eventually came to nothing.

Another disappointment has proven to be the $2.8bn deal for US-based International Securities Exchange Holding in 2007, aimed at the creation of a transatlantic derivatives operator. While it may yet come good Deutsche Börse was forced to admit in December 2010 that it would take a second write-down on its ISE business that would result in €220m ($304m ) being shaved from 2010 net income.

The statement came as no great surprise to analysts after the exchange said in October 2010 it may have to take a charge for ISE, citing a subdued trend on the US options market and regulatory approval still pending for ‘certain functions’ within the deal. Write-downs to date now total more than €800m ($1.1bn) as the deal has tried to digest product delays and market share losses.

Indeed, while ISE accounted for 22.9 percent of overall US options trading in January, up from 20.3 percent the previous month when it had slipped to fourth place among exchange operators, it remained a far cry from its 28.4 percent share in January 2010 – prior to which it had long battled the Chicago Board Options Exchange (CBOE) for top dog status in a highly competitive market.

Meanwhile, he may have missed out on NYSE-Euronext before, but as the old adage says: ‘what goes round comes round’ and Francioni may yet have the satisfaction of concluding the deal that had hitherto proved beyond his grasp.