Spanish PM Mariano Rajoy has admitted that the country’s deficit, will in all likelihood be considerably higher than an agreed target for 2012 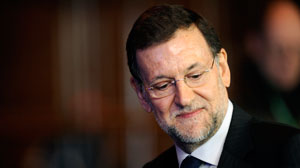 The announcement of the increased deficit estimate comes after poor  performance in 2011, which saw unemployment rates become the highest in the EU (with almost one in four people out of work) and the economy contract by 0.3 percent in Q4. By the end of the year, Spain’s deficit as a percentage of GDP stood at 8.5 percent – in January, Rajoy outlined a budget plan which included €6.3bn (£5.2bn; $8.3bn) in tax rises and €8.9bn (£7.4bn; $11.8bn) in cuts, and pledged to halve the country’s deficit to 4.4 percent. Today, Rajoy was forced into an embarrassing climb-down, upgrading the deficit target to 5.8 percent – but the embattled premier said that the inflated forecast represented “significant austerity”.

However, analysts remained skeptical of Spain’s ability to achieve this aim, with Emilio Ontiveros of AFI Madrid stating that the new figure was a “difficult objective in the absence of any traction in external demand,” and that Spain was now almost entirely dependent “on its main commercial partners in the eurozone”.

The declaration also coincides with the formulation and promotion of a new EU treaty (which has already been signed by 25 of the 27 member states) designed to prevent member states amassing large debts – however, Spain is not the only member of the EU that has predicted it will miss its 2012 deficit reduction target – the Netherlands also stated recently that it will not attain its deficit target of 4.1 percent in 2012.