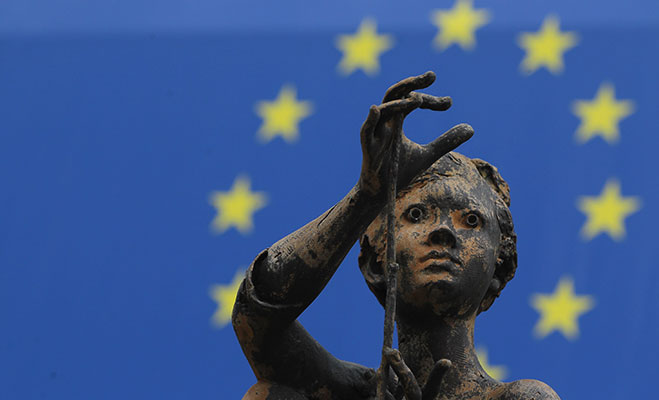 In blatant violation of the Maastricht Treaty, the European Commission has come forward with one bailout plan after another for Europe’s distressed economies. Now it wants to socialise not only government debt by introducing Eurobonds, but also banking debt by proclaiming a ‘banking union.’

Socialising bank debt is both unjust and will result in a future misallocation of resources. Socialisation of bank debt across borders implies that a country’s private borrowing costs are artificially reduced below market rates, as insurance (in the form of credit-default swaps) is provided free of charge by other countries. Thus, capital flows from the core to the periphery would continue to exceed the optimal amount, undermining growth for Europe as a whole.

History offers countless examples of the misallocation of resources that can result from socialisation of bank debt. One is the 1980s savings and loan crisis in the US, which cost US taxpayers more than $100bn. Under the umbrella of common deposit insurance, US savings banks made a ‘gamble for resurrection’ – borrowing excessively from their depositors and lending the money out to risky enterprises, knowing that potential profits could be paid out as dividends to shareholders while potential losses would then be socialised.

Benefiting from private profits
In other words, private profits were generated out of socially wasteful activities. Essentially the same happened with US subprime mortgage lending and with the Spanish banking system in the 2000s. In both cases, banks took excessive risks in the expectation, eventually vindicated, that governments would bail them out.

Spanish banks speculated on a continuing increase in real-estate prices, which would bring large capital gains to their customers. Indeed, they often lent homeowners more than 100 percent of the underlying property’s value. To compensate for the damage that their reckless behavior caused, they received €303bn ($378bn) in extra credit through Target, the European Central Bank’s interbank payment settlement system, and can now expect a further €100bn in help from the European Financial Stability Facility. Much of this money will never return.

Debt-equity swaps would be a much better way to recapitalise the banks. Rather than imposing the costs of the ECB’s and EFSF’s losses on European taxpayers, the banks’ creditors could give up some of their claims in exchange for receiving shares from the banks’ owners. Debt-equity swaps then rescue the banks, without rescuing
their shareholders.

Ideally, bank creditors would not lose money, because their fixed-interest claims would be converted into bank shares of similar value. This would be the case as long as the banks’ losses remained smaller than their equity capital. A true loss would be inflicted on a bank’s creditors only if the write-off losses on toxic mortgage loans exceeded the bank’s equity.

But, even then, it would be better for creditors to bear the loss than for taxpayers to do so, because this would encourage more cautious lending in the future.

Socialising public debt is already posing a risk to the still-stable eurozone countries. To do the same thing with bank debt could pull hitherto sound economies into the abyss, because bank’s balance sheets are much larger than the volume of government debt. In Spain, the public debt-to-GDP ratio is 69 percent, but the debt of the Spanish banking system totals 305 percent of GDP, or about €3.3trn– about as much as the combined public debt of all five crisis-stricken eurozone countries.

While the enormous volume of the bank debt implies that governments should shy away from socialising banking risks, it also suggests that only the banks’ creditors could reasonably be asked to foot the bill without being overburdened. Indeed, if, as some believe, only a fraction of the banks’ equity is at risk, the potential debt-equity swaps would be minuscule.

Debt-equity swaps have been used successfully in many cases, and they follow from normal bankruptcy procedures. Apart from avoiding the excess burden and injustice of taxation, they also have the benefit of inducing banks’ owners to choose a prudent investment strategy, while persuading creditors to scrutinise and select carefully the banks to which they want to lend.

The care that has been taken in augmenting and preserving the wealth that current generations inherited from their ancestors is the ultimate reason for economic growth and for capitalism’s vast success. Massive government interventions during the crisis have undermined this principle, and have probably already destroyed much of the inherited wealth for the next generation.

It is time to heed the fundamental laws of economics, and to put a stop to the imprudence that those charged with fighting the crisis have been allowed to get away with. Europe definitely does not need a banking union beyond a common regulatory system.