Crisis in the coalition

Figures in the ECB and several governments are not only resigned to Greek exit; some are pushing for it 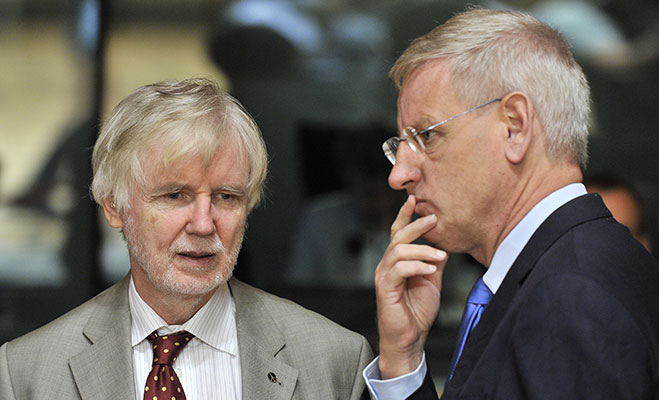 Finland’s foreign minister Erkki Tuomioja has issued what the Telegraph is calling “the bluntest warning to date by a senior eurozone minister.” He admitted Finland was planning to block attempts to strip the European Security Mechanism’s (ESM) level of seniority as a credit institution, the first step in the planned reforms to enable it to bypass eurozone central banks and lend directly to retail and investment banks. Finland is uncomfortable about the prospect of ESM lenders losing their priority in line for repayments. Leader of the True Finns, another major party in Finland’s motley coalition party, reportedly said that “Taxpayers here are extremely angry… There are no rules on how to leave the euro but it is only a matter of time.”

All eurozone countries have a veto power over proposed legislation; Finland is one of several whose active approval is required for new bailout measures. A law passed there this summer states that the ESM has the same priority as the IMF.  Miapetra Kumpula-Natri, the chairman of the Finnish parliament’s Grand Committee on Europe, claims the entire coalition government will have to pass a new law to approve the ECB’s new bailout proposal. The latest plan involves buying out Italian and Spanish sovereign bonds. Contributors to the ESM are desperate to avoid a situation like the one where the ECB and EU investors absolved themselves of 75 percent of losses on Greek bonds, laying the burden squarely on institutional investors.

Even the Bundesbank is not fully supportive of the depth of financial support on offer, despite the new agreement Angela Merkel made with the Italian and Spanish leaders in July. The Telegraph reported the ECB’s revelation that “The Bundesbank remains critical of the purchase of euro system sovereign bonds, which comes with considerable risks for stability.” It continued: “Decisions about a possibly even broader mutualisation of solvency risks should be anchored in financial policy, meaning with the governments and parliaments, and should not occur via central bank balances.” This comment, though, is partly the Bundesbank’s sour reaction to a rumour that the ECB might cap German Bund yields. The real danger is a number of German lawsuits which are even now challenging the legality of a German contribution to a permanent European bailout fund.

Cracks are appearing in the ECB too. Reuters released a copy of an interview given by Joerg Asmussen, a member of the European Central Bank’s executive board, to Germany’s Frankfurter Rundschau. He is quoted as saying, “Firstly my clear preference is that Greece should remain in the currency union. Secondly, it is in Greece’s hands to ensure that. Thirdly, a Greek exit would be manageable.” But, he maintained, that “it would be very expensive – in Greece, Europe as a whole and even in Germany.”

Taxpayers here are extremely angry… There are no rules on how to leave the euro but it is only a matter of time.”

Spanish officials are starting to concede the necessity of a EU-funded lifeline. Reuters stated that Madrid’s mayor Ana Botella, wife of former Prime Minister Jose Maria Aznar, said: “There’s no doubt about it. It’s very probable that we’re going to have to ask for help from the European Union.” Reportedly, she told Spanish news agency Europa press that “It seems inevitable” that Spain would need its own bailout plan.

For countries with a less stable political and trading situation, the expectation of eurozone breakup has already necessitated crisis measures. Morocco has recently secured a $6.2bn precautionary credit line from the IMF, in return for enacting austerity measures. How many other comparatively strong economies will subscribe to the ‘Precautionary and Liquidity Line’, announced by IMF managing director Christine Lagarde last 2011? The Bank of England released a report last week stating the British economy could shrink by seven percent because of lost trade, in the event of a Greek exit precipitating eurozone break-up.