At a time when Greece is facing ambiguity over its debt measures, one thing is certain: Apostolos Tamvakakis, CEO of the National Bank of Greece possesses the flair and dexterity to emerge from the rubble 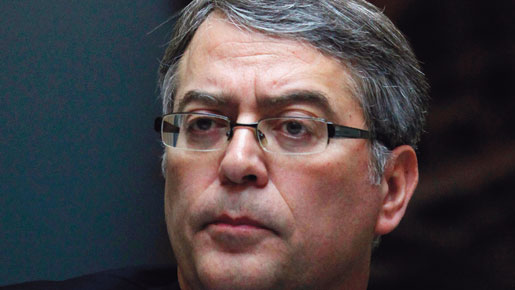 As the head of Greece’s biggest bank Tamvakakis has a lot of gravitas when addressing the nation on issues affecting the country’s financial stability, the bailout package from the ECB and IMF, and the likelihood of a restructuring of Greece’s debt.

Strategic master
The mellow-toned Tamvakakis is a highly calcu- lated manager who maintains strong financial links and offers vast experience in consortiums and companies within the public sector. He was appointed CEO at NBG in December 2009 where he had previously served as vice chairman between 1998 and 2004. Just before rejoining NBG he completed a short stint in March 2009 as head of strategy and business development with Geneva-based business group Latsis.

He is widely admired for the ease with which he managed to preserve connections from the various domestic banking roles and his time abroad with Latsis. He gained invalu- able experience in his roles as deputy governor at the National Mortgage Bank between 1996 and 1998, as deputy general manager for ABN AMRO Greece between 1989 and 1996 and as corporate finance manager at the Hellenic Investment bank from 1986 to 1989.

Born in 1957, the father of three is not all work and no play. When not busy spending quality time with the family he enjoys the sea and loves spearfishing. Those who know him say that he retains deep personal relationships but prefers to stay away from large social events if he can help it. Instead he occasionally gets together with his friends and work colleagues to play a hand of poker.

Belief in the country’s success
Those close to him know that the Judo black belt is not afraid of jumping in at the deep end. In these rather difficult times for Greece, Tamvakakis has shown his ability to anticipate the challenges of the sector early on and take preven- tive measures to strengthen the banks’ capital base. Consequently, he succeeded in securing access to repo lines worth €5bn from the glo- bal markets, which helped to reduce the banks dependence on the ECB liquidity facility. In addition, Tamvakakis continued to support Greek businesses and households in Greece when they made an effort to meet their obligations and accepted that economic recovery requires banks to endeavour to minimise the consequences of the crisis.

Tamvakakis believes banks should lever- age the opportunities that have arisen from the adjustment of the Greek economy to its new environment. When 54-year old Tamvakakis recently met up with the President of Greece, Charles Papoulia, he assured him that “there is no concern for the banking system, which, despite the unprecedented crisis is in good con- dition, both in terms of capital and liquidity.”

Tamvakakis says Greece will succeed “as long as citizens, businesses, politicians, and everyone does what needs to be done. One knows what to do in an atmosphere of under- standing, solidarity, and in cooperation with our European partners, who we know are our natural allies, have been and always will be.”

In a recent speech in front of around 600 businessmen in the northern city of Ioannina, he noted: “Debt restructuring is not an alterna- tive option because it would mean the country’s destruction and will take Greece back decades. Instead we should concentrate all our efforts to meet national fiscal adjustment targets to reform the country’s economy. I am sure we will succeed.”

National Bank of Greece profit results
NBG recently announced first quarter net profit results which were boosted by its subsidiary Fi- nansbank and showed a 39 percent increase to €157m on the year compared to €114 the previ- ous year. Tamvakakis noted that NBG increased its profits through radical cuts in operational costs and managed to ride out the crisis in a satisfactory way thus far, but said that important challenges remain ahead.

With the assistance of Tamvakakis, NGB was able to successfully absorb the negative impact of the economic crisis and managed to further reinforce its already solid capital base. However, the challenges that lie ahead for Tamvakakis nonetheless remain formidable.

NGB improved its liquidity conditions with the use of Greek Government guarantees and con- sequently increased funding autonomy of the group’s banking affiliates, and de-leveraging of non-core assets.

Tamvakakis and the NGB team are pre- paring to launch new initiatives to strengthen the Greek banking system which will help to successfully face the challenges of the crisis. According to Tamvakakis this shall simulta- neously assist with positioning NGB strategi- cally so they can play a key role when the Greek economy recovers. “The moment of recovery should not be far off if we all, in a spirit of responsibility, national consensus and mutual support, commit ourselves to the imperatives of the times,” Tamvakakis believes.

Manager of the Year 2010
In April Tamvakakis was honoured with ‘The Manager of the Year 2010’ award, a yearly event which started in 2002 and is organised by the Hellenic Management Association. The event was attended by over 370 politicians, entrepre-neurs and executives keen to show their approval, respect and admiration when the prize was pre- sented to Tamvakakis by Deputy Prime Minister Theodore Pagkalos.

In his speech following the presentation of the award, Tamvakakis said: “The tough test of our country brought on by the current finan- cial crisis forces all of us to face new challeng- es, and better comprehend our requirements and responsibilities. This applies especially to Greek entrepreneurship. In difficult times, I think those worthy of the title of entrepreneur are those who are not afraid of taking risks, initiatives and responsibility for their country. Not those looking on in apathy.”

He went on to say: “I believe that we must all, the state, businesses and citizens, con- front our problems wisely with a strong plan but also with courage and determination. I am completely convinced that we can suc- ceed if we join forces, in solidarity and with a new national self-confidence to revive the re- birth of our country. We owe it to ourselves and our children.”