France's richest man and an advocate of tight control over his distinguished brands, Bernard Arnault has all aspects of the luxury market cornered 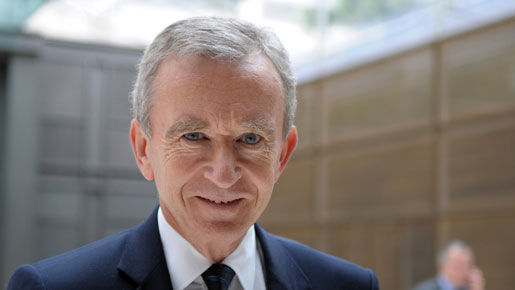 Arnault was born on March 5, 1949, and grew up in northern France, in Roubaix. He joined the family run construction business after graduating with an engineering degree from Ecole Polytechnique, in 1971.

Under Arnault’s direction his father’s company prospered thanks to luxury developments on the French Riviera.

He moved to America in the 1980s where his expertise in real estate enabled him to have success building luxury apartment and condominiums in Palm Beach, Florida.

Arnault later returned to France and took over the textile firm, Boussac, which owned the brand Christian Dior. This buyout became a model strategy for Arnault, which involved building a multinational luxury conglomerate by taking over famous but struggling family-owned brands.  Parts of the Boussac company were sold off and helped fund the purchase of a 24 percent share in the LVMH enterprise.

Arnault eventually took control over the company, aided by a stock market crash in 1987, which helped him acquired a 43 percent stake. He became the largest shareholder and set about moving the company’s focus more in line with the luxury marketplace. This rebranding included taking on a new designer called John Galliano, who played an important role in the establishment of the company.

Arnault continued buying luxury brands during the 1990s, including Givenchy and TAG Heuer. His skill in maintaining tight control over his purchases has involved taking legal action against individuals and organisations linked to counterfeit products that Arnault considered to be undermining his brands. This tactic has ensured the longevity of some of the most famous names and products in the world.

He has been married twice and has five children, and is a well know collector of art, and created a Louis Vuitton foundation for contemporary art, scheduled to open at the Jardin d’acclimatation in 2010.