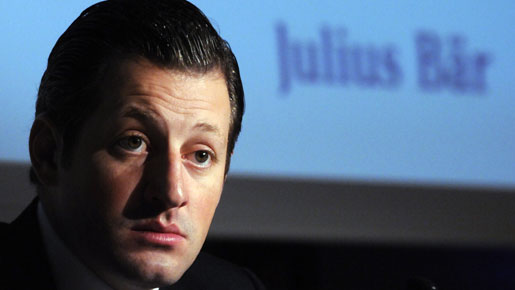 In 2008, the multi-talented Boris Collardi topped the inaugural Wealth Bulletin top-40 listing of rising stars, under the age of 40, in European wealth management. But even if you are one of the most brilliant young prodigies of European banking, filling a dead man’s shoes is never going to be easy.

The shocking and tragic suicide late last year of 52-year old Alex Widmer left a gaping hole at the head of Julius Baer Holdings AG, a firm established in 1890 and today Switzerland’s second largest wealth management bank, with funds of CHF338 billion (US$314.426) under its control. It was Boris Collardi who stepped forward to take over from interim CEO Johannes de Gier – who moved over to head the bank’s hedge fund management – and fill the void, becoming, at the age of just 35, the youngest chief executive in the bank’s long history.

It is significant of Boris Collardi’s glowing reputation in the close-knit sphere of Swiss banking that Widmer’s death was contained as a private tragedy and did not rock the bank’s foundations, as could well have happened.

Widmer had masterminded a strategy, in place since 2006, of personally hiring scores of advisers and, with them, wooing rich clients from far beyond the bank’s Swiss home market – boosting the bank’s investment war chest with considerable fresh client funds. However, that’s been a costly process and revenue peaked and started to fall as the global crisis bit deeper.

Zurich-based Julius Baer Group – also known as Julius Bär Group in German – also maintains offices in London, Dubai, Frankfurt, Grand Cayman, Hong Kong, New York and Singapore. Named after its founder, it is the parent of Bank Julius Bär and works in the areas of wealth and asset management, investment consultancy, the maintenance of investment funds for both individual and institutional investors, and also has securities and foreign exchange trading activities.

Boris Collardi joined the bank in 2006 as chief operating officer, at the time of the firm’s acquisition of hedge fund management company GAM and three private banks whose integration into the firm he was charged with managing.

Unlike most of his peers, Collardi – a native of Nyon, where he attended Cessouest School – had no university education but plunged straight into the maelstrom of Swiss banking and proved more than capable of swimming with the rest, spending a dynamic 12 years rising through the ranks at Credit Suisse, gaining invaluable experience on the international banking stage with roles that took him all over Europe, as well as to stints in Singapore.

In 2004, he was appointed as CEO Europe, Middle East and Northern Africa and Head of Special Projects before leaving to join Julius Baer two year’s later.

After in-depth consultations with wealth advisors and others in the banking industry, Wealth Bulletin chose Collardi from among the more than 300 other contenders to be the banker at the top of its Top 40 rising stars of the industry, commenting editorially: “Prospects have rarely been brighter for wealth advisers who are rising stars. Collardi has not let lack of educational qualifications get in the way of his success and has moved swiftly through the ranks of firstly Credit Suisse and then Julius Baer. Many in the industry see him as a potential chief executive of a big name Swiss private bank in the not too distant future. Collardi himself is modest about his ambitions in wealth management. “I am happy to be where I am at the present time,” he says, but few believe that Collardi will not progress further up the ladder – and soon – of European wealth management.”

As merger and acquisitions activity grows across the world’s banking system, Julius Baer is often cited as a potential consolidator and Boris Collardi’s recent forays to the Far East would seem to reflect such ambitions: “With a strong and liquid balance sheet, we are in a good position to make deals and we are currently considering takeovers, not only in Switzerland but in Asia,” Collardi has been reported as observing.

The bank’s net profit attributable to its shareholders rose to 389 million CHF (US$361.816 million) in 2009, from 357 million SF (US$332.076) a year earlier. The cross-Europe clampdown on tax evaders, the steady erosion of Swiss banking secrecy and the world’s shaky climb out of recession are, of course, having an impact. Across the border in Italy, an amnesty led many of the bank’s clients there to come clean with the taxman, leading to outflows from the bank’s coffers.

At the same time, Swiss Bank USB was forced to provide the American IRS with the names of some 4,450 American offshore account holders but, Collardi told a recent offshore banking conference in Zurich: “Switzerland currently manages around a third of the world’s US7 trillion worth of offshore money.

“I believe around 40 percent of these assets currently under management in Switzerland are here for secrecy reasons but only around eight or 10 percent of that amount is here purely for tax avoidance and greater transparency will see this all but vanish. However, the levels of service and safeguard of assets that the Swiss banking system provides will enable it to continue its role as a safe haven for incoming funds.”

In announcing Collardi’s appointment as its new CEO, Bank Julius Baer issued a statement that said: “With broad experience in international banking, Boris Collardi has played a key role in shaping Bank Julius Baer into one of today’s leading private banks globally.

“An assessment of Bank Julius Baer’s present requirements resulted in the board unanimously choosing an excellent candidate from the internal pool of talent, itself a sign of the strength of our organisation.”