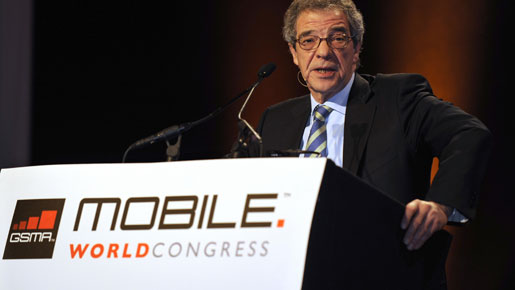 Telefónica has stormed through the global telecommunications industry since César Alierta Izuel took over as chief executive in 2000. The past nine years have seen the once state-owned Spanish company grow its collection of international networks and increase its customer base almost four-fold to today’s 258 million subscriptions.

“Telefónica can do anything it sets out to do. There is no challenge we can’t face,” Alierta proudly told audiences at a summit in Madrid in March. Within two years, the company would be “a world leader in the new digital environment”.

Despite the recession, Telefónica would continue to grow, in part thanks to the crucial role telecommunications would play in rebuilding the economic system, Alierta maintained.

“[Telecommunications] lie at the core of business performance and competitiveness,” he said, adding that Telefonica’s size, diversity, and branding gave it an edge over other companies.

Now both chairman and CEO of the world’s third-largest telecommunications company, Alierta’s exposure to the industry has come recently. The first part of his career is dominated by financial experience – which has set him in good stead to manage expanding multinational companies.

Born in Zaragoza, an industrial city halfway between Madrid and Barcelona, the 64-year-old started his career in banking. Fresh from completing an MBA at Columbia Business School in New York, Alierta joined the Madrid-based Banco Urquijo in 1970.

He had been one of an illustrious class at Columbia – among his contemporaries were Bradford Evans, a future managing director of Morgan Stanley, and Daniel Piette, who would become CEO of LV Capital in Paris.

Today Alierta remains one of the School’s biggest successes, still appearing on its lists of distinguished alumni. He maintains links with the School, sponsoring its Feldberg Fellowship for promising MBA students and sitting on its board of overseers.

Alierta stayed with Banco Urquijo’s capital markets division for 15 years. Spain went through significant upheaval during this period – after dictator Francisco Franco died in 1975, the country moved to a democratic political system and society liberalised.

Once the country had settled in the 1980s, Alierta left Banco Urquijo to establish his own private banking and stock brokerage firm, Beta Capital. The firm grew steadily and established itself in the Spanish financial industry with Alierta as chairman. Shortly after he moved on in 1996, ABN Amro subsidiary MeesPierson bought 30 percent of the firm, with Fortis completing the purchase in 2000.

At Beta Capital, Alierta earned a reputation for himself within the Spanish finance sector. In the early 1990s he took on the chairmanship of the country’s Financial Analysts’ Institute for five years. Together with Spanish businessmen and academics, he remains on the editorial committee for the Institute’s tri-annual journal, and last year the organisation awarded him its gold medal.

After 11 years at Beta Capital, a new government presented Alierta with a fresh opportunity.

The incoming Popular Party-led government changed the leadership at many state-owned companies after the 1996 Spanish election. Alierta was appointed chairman of Tabacalera, a tobacco firm 52 percent owned by the state. He was tasked with preparing the company for privatisation.

On Alierta’s watch, the company raised the price of cigarettes, closed factories in Spain and bought production operations in Central America, and expanded into the US cigar market. The moves angered Spanish smokers and labour unions, but saw the company’s share price on the Madrid stock exchange double. In April 1998, the government’s stake in the business was put up for sale, and Alierta told media he wanted the company to become a multinational.

A year after its successful privatisation, the company formalised a merger with French tobacco company Seita. Alierta became co-chairman of the new company, alongside Seita’s head Jean Dominique Comolli. With his position watered-down, Alierta stayed as chairman just long enough to manage a graceful exit, although he remained a director until early last year when Imperial Tobacco bought the firm.

Moving from tobacco to telecoms, Alierta took up his post at the head of Telefónica in 2000. He had been a director for three years, and then became the company’s chief executive. In his first annual report, Alierta is notably cautious in comparison with statements in later years, describing the company as “vibrant project in a state of constant evolution”.

Like Tabacalera, Telefónica was originally owned by the state, and did not move fully into private hands until 1997. In contrast to the tobacco firm, Telefónica grew internationally quickly and extensively.

It amplified its hold in Latin America in 2004 when it bought out Bell South’s operations in the region. A year later it purchased a Czech company and part of a Chinese one. In 2006, the company completed the ambitious buy out of British telecommunications giant O2. Alierta took seats on the Boards of Directors at Telecom Italia and China Unicom after Telefónica took a stake in the firms.

Throughout his career, Alierta has built a reputation for building competitive teams and focusing strongly on results, Ricardo Pérez, Professor of Information Technologies at IE Business School in Madrid, says.

Now Alierta must steer the company through the rapidly evolving digital telecommunications environment.

“A big challenge is the transition to the next revenue model, that is basically supported by value added services and built around collaboration with other companies, basically from the internet and media industries,” Pérez says.

“We have the physical and commercial access to the customer, and we are sure that the technological development of our wireless networks will enable us to cater for all our customers’ needs.”

Alierta says he hopes to see the company lead the industry in digital telecommunications within two years.