Eike Batista, the half-German, Europe-educated Brazilian mining billionaire, has come out from the shadow cast by his businessman father to become an icon in his own right 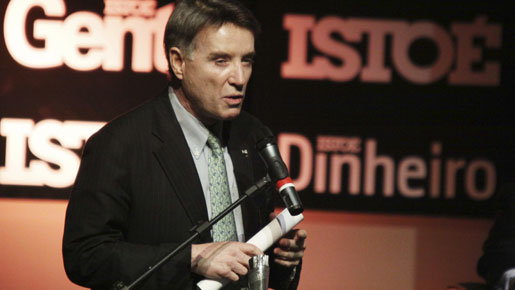 Brazilian mining mogul Eike Batista says he owes the success of his business, built from scratch and now worth billions, to basic rules of mining exploration he learned as a young man digging for gold.

“In mining, you go to some crazy place, you set up a camp, you start looking for water and energy and this way you can build anything. That’s the mind-set. That’s my life. That’s how I learned to build things from zero,” said Batista, a 51-year-old billionaire who is one of the world’s richest men.

Batista is about to complete the sale of two iron ore projects to Anglo American Plc for $5.5bn. That still leaves him with 700 million tonnes of iron ore reserves, a bauxite project, ports, power plants, a water company and his latest exploratory passion – oil and gas.

The charismatic Batista’s other talent consists in meticulous headhunting for top-notch geologists and managers, whom he offers equity in his enterprises to give them an incentive to deliver great results.

Executives at Brazil’s two top companies, mining giant Vale and oil major Petrobras, acknowledge that Batista has superb teams of geologists from their own former cadres for both iron ore and oil.

Despite the magnitude of his operations and wealth, Batista is still preoccupied with leaving his own footprint after years spent in the shadow of his father, a prominent mining executive of the 1980s, and his sex symbol ex-wife.

The half-German businessman has two sons, Olin and Thor, aged 12 and 16, from his marriage to Luma de Oliveira, a model and former Playboy covergirl, now 42. They divorced in 2004.

“Until four years ago I was referred to as the husband of Luma de Oliveira and son of Eliezer Batista. I decided that it had to change, for my kids. I’m totally self-made and I want to be a reference in terms of thinking big, doing big things and I want to have a reputation in this country,” he said.

That explains his desire, bordering on obsession, to be recognised as Brazil’s wealthiest person, and to beautify his base city of Rio de Janeiro, where he is investing millions of dollars to clean up the scenic Rodrigo de Freitas lagoon near his home and Guanabara Bay, where ocean liners drop anchor.

Lean, with graying reddish hair, Batista laughs and gesticulates as he speaks in Portuguese punctuated with English expressions.

Forbes puts his fortune at $6.6 billion, which makes him Brazil’s third-richest man – behind Antonio Ermirio de Moraes, head of diversified industrial group Votorantim, and banker Joseph Safra – and ranks him No. 142 in the world.

Wearing a sports jacket with elbow patches over a black T-shirt, jeans and sport shoes, only a massive rose gold Rolex watch is a reminder of his wealth.

His modern office on Flamengo beach has a breathtaking view of Guanabara Bay and a photo of his ocean race powerboat on the wall. Batista holds various speedboat records, set between 1990 and 2006. Expensive machines are his passion and a Mercedes-Benz SLR McLaren sports car decorates his home’s parlour.

A European childhood
Born in Brazil, Batista spent most of his youth in Europe with his German mother and six siblings and studied metallurgy in Aachen University in Germany. His father, Eliezer, was twice chief executive of then state-owned Vale, or CVRD.

“He influenced me in thinking big, but this link between my father and Vale actually damaged me professionally,” Batista said, explaining that he coveted the big mining company.

“My father wouldn’t let me get close to Vale, even when it was privatised, as he was worried about inside information and stuff.”

Batista settled down in Brazil in 1980 to start an independent gold mining and trading company in the Amazon, negotiating with wildcat gold diggers.

He later joined Canadian mining firm TVX Gold as a key stockholder. He made and then lost a big part of his fortune with TVX, where he served for a time as chief executive.

But he ended up with about $1bn in 2000 after selling his stake, which he reinvested in his own businesses – the water company, power plants and MMX Mineracao – his main mining asset, publicly traded since 2006.

“People know me after MMX in 2003, but my life before then cannot be thrown into a dustbin. I built five gold mines in Brazil, one in Chile and two in Canada. I travelled all over the world. I had two great mines as far as in Kamchatka in Russia, but the Russian mafia kicked me out,” he said.

All the companies he owns have an X in their names, which Batista says symbolises the multiplication of wealth.

“Eike has certain characteristics that differentiate him from most Brazilian entrepreneurs, and that is an ability to handle risks and a successful business strategy based on diversification, which is rather rare here,” said Betania Tanure, management consultant and the author of research works on Brazilian managers and their styles.

“He is opening his game, putting his companies to trade publicly, which is helping to boost his image along with what looks like a pretty consistent success,” she added.

Last November, Batista stole the show at an annual auction of oil concessions in Brazil, shelling out around $1bn for licenses to explore 21 offshore oil blocks.

“Oil and gas is so much bigger than mining that it’s easy to leave mining behind, eventually,” said Batista. “I’m going to set a benchmark in oil exploration in Brazil. We’ll start producing in 2011, to show that it’s possible to go from licensing to output in that little time,” he said.

He plans an initial public offering of up to $2.5 billion in May or June for his holding company’s oil unit OGX, which he expects to have a market value of $12bn – $15bn.

“That’s the next big thing for me,” he said.

“It’s a paradise here. They are taking care of government accounts and letting the private sector do its thing,” he said. His plan is to stay in Brazil and that is why he wants to make Rio a better place to live and work.

Apart from water clean-up works he finances, Batista’s other embellishments are more commercial in nature – like a luxury motor yacht with a restaurant that takes paying customers on sightseeing trips along Rio’s coast, and the historic bayside Gloria hotel he just bought and wants to elegantly refurbish.

“I want to give Rio back its identity as a luxury city, to attract tourists, to give Rio citizens self-esteem. I don’t want my sons to leave Rio, like so many children of people with money do,” he said, adding that Rio’s notorious crime problem should disappear with time as wealth replaces poverty.

“Now we’re all in the same boat. I use an armoured car in case of a stray bullet or some kid on drugs doing a foolish thing, but I do go out to jog or to have a bite to eat in the street, without bodyguards. And I don’t have fear,” he said.