Having been at Schneider Electronics since 1988, Tricoire has made a rare achievement in this day and age. His plans for the future include India, China and Mexico... 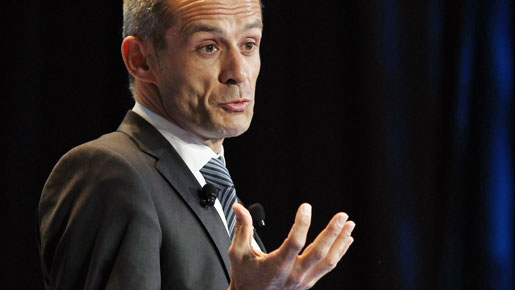 Early in his career, Jean-Pascal Tricoire held a number of positions, joining telecommunications giant Alcatel in 1985, before moving to management consultants Schlumberger then onto construction firm St Gobain the following year. From there, he joined Merlin Gerin, subsequently acquired by Schneider Electric. From 1988 he worked mostly abroad in Schneider’s global offices, spending five years in Italy, five years in China and a further one year in South Africa. Upon returning to France in 1999, he has held a number of senior positions within the group, including Head of Schneider Electric’s Global Strategic Accounts and of the Schneider ‘2000+’ Programme. Tricoire was appointed CEO and Chairman of Management Board of Schneider Electric in May 2006, taking over from Henri Lachman.

Schneider Electric’s strategy for many years has been to grow by acquisition and expand its geographical presence.

This is something that Tricoire also engendered. In 2003, Schneider had acquired Australian energy management specialist Clipsal. This was an important acquisition for Schneider as it opened the gateway to the Australian – and ultimately Asia Pacific – data communication markets. With a view to future penetrate the the South East Asian market, at the time of the deal, Schneider also entered into a joint venture with Singapore-based CIH Ltd to begin to identify sales opportunities for Clipsal products in the region. At the time both parties held an equal share in the venture.

Building for the future
Following his accession to the head of the company, Tricoire sought to build on the possibilities that the original deal had offered, and in 2006, Schneider Electric purchased the 50 percent stake owned by its partner, CIH Ltd, in the Clipsal Asia joint venture. Tricoire had determined that sufficient groundwork had been done over the course of the three years since the original deal and wanted Schneider to be in a position to benefit wholly from opportunities offered by the lucrative South East Asian market.

Another key deal that year was Schneider’s purchase of Merten GmbH, a German provider of low-voltage control systems for both domestic and business installation. Tricoire had recognised early on the importance energy-saving technology would play and was keen to add important facet this to its portfolio. There were other strategic considerations also. Whereas Merten was based in Germany, some 30 percent of its total €100m revenues were generated from overseas sales. To complement the Merten deal, two years later, Schneider would bolt-on Ritto GmbH, another German firm, this time specialising in door entry and intercom systems.

In 2007, Schneider made two important forays into the US. The much smaller of the two deals was that of video security specialist, Pelco for just under €50m. With the acquisition, Tricoire hoped to bolster Schneider’s energy and HVAC control, electronic security and fire safety offerings, one of the company’s new businesses lines.

The big deal, however, was the $6.1bn acquisition of American Power Conversion (APC). The rationale behind the deal was that APC would provide a good strategic fit with MGE UPS Systems, a division of Schneider in which Tricoire himself had worked earlier in his career. The combination of APC and MGE was to create a major player in the critical power and cooling services market. This was a deal that would make Schneider a big player in a big pond.
The biggest step so far
Following this, in the same year, Tricoire has set his sights on India. In a move designed to tap into India’s lucrative LED sector – worth an estimated ¤900m and rising – Tricoire launched Schneider Electric India (SEI). The offering included an external, rechargeable battery, with the ability to power the LED lamp for up to eight hours in the event of a power cut. Whereas even in a developed market such as Europe and the Far East, where LED technology had been popular for some years, usage had been restricted primarily to the commercial sector. With this venture, however, Tricoire was looking to crack the residential market. To date it’s going to plan, with SEI posting revenues of just over €700m in 2009, and has set itself a target of doubling this figure by 2013.

Jean-Pascal Tricoire clearly has global ambitions for Schneider Electric, and is constantly keeping his eyes open for opportunities wherever they may lie geographically.  To identify new product opportunities, he has established R&D facilities in India, Mexico and Shanghai. Tricoire’s profile on the company’s website includes some of the things he most likes in life. Amongst them he lists, ‘multicultural teams, commitment, curiosity, travelling off the beaten path and new technologies’. His work as CEO of Schneider so far suggests that he is standing true to these values.