At the intersection where media and technology meet you'll find Jorn Lyseggen, CEO of the Meltwater Group, forecasting the future 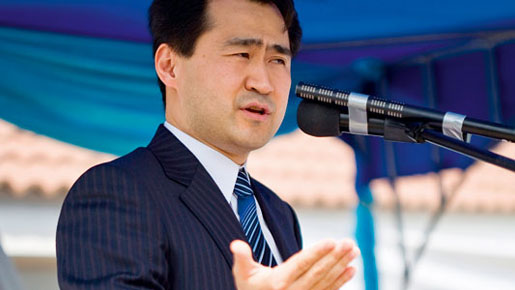 Based on the premise that the internet was going to radically change the publishing world, Jorn Lyseggen created a company that is a global leader in the field of media-monitoring.

In 2001 he founded Meltwater News (then Magenta News) revolutionising the way media-monitors did business by creating software that crawls online media to give clients the information they require, in a fraction of the time and at a fraction of the cost of traditional clippings agencies. And although he calls himself just a little Norwegian operator, nine years later, $100m in turnover and 50 offices in over 20 countries tell a whole different story.

Of Korean heritage, Lyseggen was adopted at an early age and raised on a small farm in Trysil, surrounded by the picturesque ski-fields that Norway is renowned for. During his youth he thought he’d follow in his adoptive father’s footsteps and become a builder, working in the natural landscape that he adored, but by the early 1990s his passion for the outdoors was joined by a new enthusiasm, when Lyseggen had his first “mind-blowing” encounter with the internet.

Unchartered waters
In 1995 Lyseggen set up an internet consultancy. One of his earliest clients was Knut Ivar Skeid, a Norwegian Media entrepreneur. “Skeid taught me a lot about the newspaper industry,” Lyseggen reflects. “The question of whether online content should be free, or subscribed and charged for, was as much of an issue back then as it is today.” Lyseggen believes that recent attempts by some news-channels to erect pay-walls around their content are unlikely to succeed unless they can offer readers a unique voice and perspective.

“How do you convince someone to pay for something they can find free elsewhere?” he says. “The media-landscape has changed; there is now a multitude of voices reporting on current events in real-time. This is something traditional newspapers have to adapt to.” Online technological advances have also raised new legal issues. Meltwater is currently locked in a well publicised legal challenge over copyright law.

“I sympathise with the newspaper industry’s attempt to monetise their online content, but we cannot accept unjust attempts to tax our clients for receiving hyper-links. The NLA (Newspaper Licensing Agency) aggressively pursues a licensing scheme transferred from traditional “paper-clipping”. But we don’t send our clients a clipping of the article. We send links to the place of publication,” he says. “We repeatedly attempted to have our opinions considered, but eventually we were forced to take the NLA to court.”

Lyseggen is confident, “Meltwater is fighting for a principle that will affect countless online businesses. We believe links do not represent a breach of copyright and we welcome the court’s ruling regarding how the laws should be interpreted. Frankly,” he continues, “I’m a little surprised that some of the larger UK online players haven’t already challenged this threat to their own industry.”

Business in a global tsunami
Lyseggen founded Meltwater during a time he describes as a “nuclear-winter” for the world’s economy in general and internet companies in particular. “In 2001 we began with just $15,000,” he explains. “And always operated strictly within our means.” True to this heritage during the global financial crisis the company pared back its expectations, but had no cut-backs, and continued making multi-million dollar investments in new product divisions, accepting instead to take a hit on top-line growth which dropped to 40 percent in 2009 from an average of 65 percent in the previous five years.

“We rode the financial crisis by remaining true to our DNA,” Lyseggen says of his company, which has never risen external funding, operates on zero debt and has consistently maintained a positive cash flow. But a hit on growth wasn’t the only challenge Meltwater faced. The swift transformation from an online media-monitoring firm to a global SaaS company with five additional business units servicing 18,000 customers, including Coca-Cola, Nokia, Ikea, Siemens, McDonalds, Unicef, and the Financial Times required a massive investment in recruitment and training. This led to an ironic dilemma in the form of social-media savvy disgruntled ex-employees.

Turning tides
“The anonymous way in which some ex-employees voiced their negative attitudes felt like a kick in the teeth,” Lyseggen says. The advent of social media platforms, such as blogging, Facebook and Twitter, has transformed the internet into a universe of voices and opinions. And Meltwater is one company that has identified the potential of harnessing a timely reportage of this cyber-babble. So it’s not surprising that Lyseggen, who views social-media as the “crowning glory of the internet” and has striven to create a company culture which values people, was shocked when he encountered the negative blog posts.

Lyseggen is candid, “I decided to use this opportunity as a learning experience, to scrutinise our internal policies. How we set the right expectations for people joining, our training practices and how we let people go if necessary. Whether we agree on the criticism or not, improving such vital processes can only be a good thing.”

“There are times when you have to make the hard decision to let someone go. This can leave a bitter taste in their mouth. We accept that. Ultimately these individuals reaffirmed our position that finding the right people will always be the key to our success.”

Oceans of talent
And the right people agree. Meltwater employs 700 staff globally and as further testament to Lyseggen’s focus on people the latest addition to Meltwater is a non-profit arm: the Meltwater Foundation, which funds the Meltwater Entrepreneurial School of Technology (MEST) in Ghana. Lyseggen started the program back in 2007 with the objective of utilising Meltwater’s core values, of developing and nurturing potential, to train African youth as future software entrepreneurs, thereby contributing to the creation of wealth and jobs locally. At the time Meltwater had 230 employees and committed to invest $2m in MEST annually for the following 10 years.

Lyseggen is resolute, “MEST isn’t just some tacked-on-the-side corporate social responsibility program, it’s an integrated part of Meltwater.” He personally devotes a lot of time to the project, recruiting and overseeing the faculty, interviewing prospective students and providing one-on-one mentoring. It’s these personal contributions that demonstrate Lyseggen understands the value of being a hands-on CEO. With four start-ups, two trade sales and an IPO under his belt by the age of 41 you would be forgiven for perceiving Lyseggen as ruthless and driven. But you couldn’t be further from the truth.

“I’ve never met anyone who didnít desire happiness and success. Trying to create a culture where people feel appreciated has always been an important part of my management style.” Lyseggen says. And capitalising shrewdly on the ebb and flow of the internet will almost certainly be his ongoing fortune.