Mary Barra has been at General Motors her entire career. She has overcome every challenge presented to her there. Now, she faces the task of restoring faith after a string of deaths and grim revelations 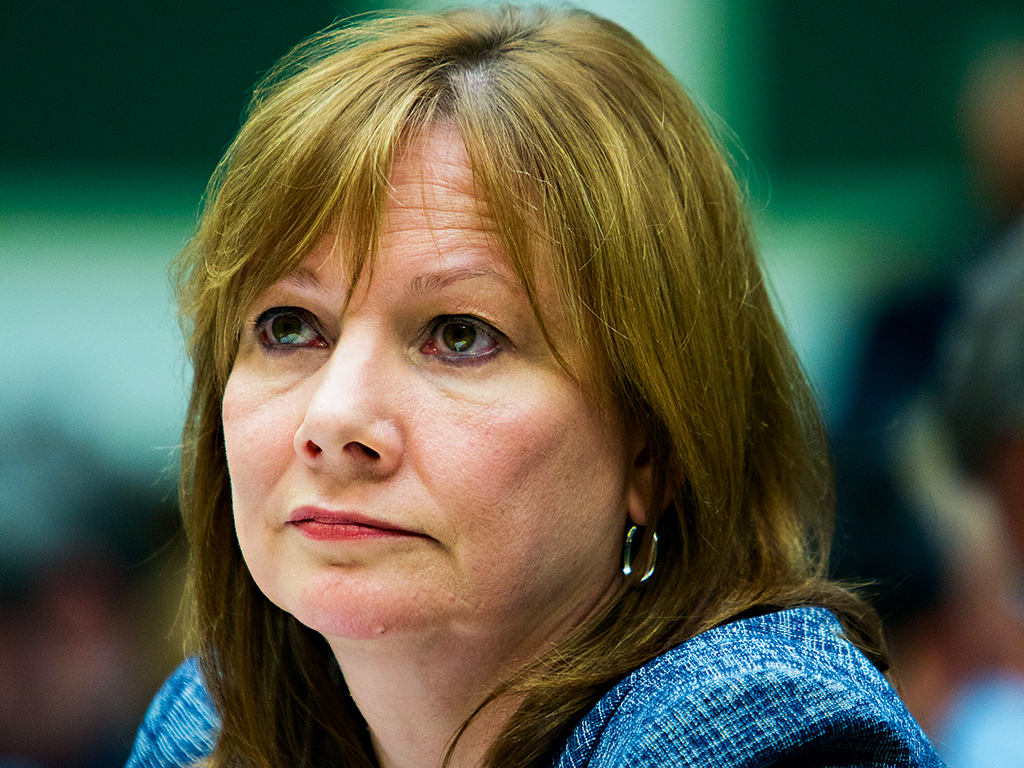 When Mary Barra replaced Dan Akerson as CEO of General Motors in 2013, she had a tough job on her hands: restoring confidence in a company whose alleged negligence resulted in the death of 20 people
Profiles

For decades, the automotive titan General Motors (GM) has been stifled by archaic corporate governance. Mary Barra, the carmaker’s new CEO, has been tasked with changing the company’s entire culture – no small task in today’s world.

GM is a global institution. Founded in the humble Michigan town of Flint in 1908, GM has spent the last century working its way onto the roads of some 157 countries. From its towering world headquarters in the rusting industrial capital of Detroit, the multinational corporation oversees production of nearly 10 million vehicles per year. These are crafted, transported and sold by over 200,000 employees worldwide.

The company holds a place of pride, producing a string of US heritage brands such as Chevrolet and Cadillac, and streamlined European and Asian contemporaries. With that sort of global influence, it’s hardly difficult to understand why GM is an instrumental mover for the US economy. Yet, like so many other ageing, titanic multinationals, the iconic automaker is also riddled with problems.

EXPERIENCE
1988:In recognition of her management potential, Barra was sent by GM to Stanford University to study for an MBA degree, where she finished in the top 10 percent
1999: Barra’s continued success and innovation in management led to her first major promotion at GM, as she was raised to the role of general director of internal communications
2009: Despite a lack of experience in human resources, Barra was made vice president of GM’s HR department on the basis of her track record in difficult situations
2013: Shortly after becoming executive vice president of global product development, GM asked Barra to step in to replace the outgoing Dan Akerson as CEO

Ingrained inefficiency
A lack of personal accountability and decisive action within the organisation has stifled progress for the better part of 30 years, leading to a number of costly, misjudged investments and reactionary management decisions. In short, GM has been a sinking ship for quite some time. Yet, because that ship is such a major global employer, it’s simply too big to fail. US taxpayers had to shell out $49.5bn to keep GM afloat in 2009 – and while the firm has since emerged from bankruptcy and is finally enjoying a boost in revenues, it’s still suffering.

Since the start of this year, GM has been struggling to contain a set of embarrassing car recalls that have already cost hundreds of millions of dollars. Evidence suggests, though nothing has been proven, that its board of directors knew about the faults in their vehicles for years, and that their compelling need to follow a long bureaucratic procedure has ended up costing at least 20 people their lives. Greying board members are hopeful GM’s new CEO may hold the key to the company’s salvation.

Above all else, GM lives and breathes establishment. Because the firm’s two biggest problems are red tape and a lack of fresh blood, one would naturally assume that the decision to appoint an employee who’s spent her entire working life at GM is somewhat near-sighted. But 52-year-old Mary Barra is already turning the institution that raised her on its head. Barra was born in Michigan during the height of Detroit’s industrial strength, to a father that worked as a die caster for GM heritage brand Pontiac. Immediately after leaving school in 1980, Barra launched her career at GM as a co-op student at its thriving Pontiac Motor Division. She swiftly worked her way through General Motors Institute (which has since been rebranded as Kettering University), and she » graduated with a degree in electrical engineering in 1985. From there, Barra went on to excel, exploring a number of engineering positions at the company’s Pontiac Fiero plant. Her skills were recognised and she was granted a GM fellowship to pursue further education. In 1988, Barra was sent to Stanford Graduate School of Business, where she earned her MBA and graduated in the top 10 percent of her class. Upon returning to work, she began to prove her worth almost instantly.

Rising to the challenge
Through the 1990s, Barra was tried in a number of diverse white collar roles, including serving as Executive Assistant to former CEO Jack Smith. But after a few years, Barra finally landed her first major role at GM in 1999, as the General Director of Internal Communications for GM North America. There, Barra was credited with transforming the company’s communications department virtually overnight. The department had become crippled in the wake of a bitter 50-day union strike. Barra’s solution was simple; to ensure communication at GM was moving both ways on the ladder to stifle future meltdowns before they could even materialise.

She proceeded to hire and train a fresh network of specialists that were able to patch up relations with factory unions. In less than two years, Barra was able to introduce a clear-cut line of communication that was completely lateral. From then on, the board recognised Barra as a forward thinker with the power to turn things around. In 2003, she was asked to apply that same spirit to a failing production facility in Detroit. Back on the factory floor at GM’s sprawling Detroit-Hamtramck assembly plant, Barra oversaw a complete facelift of the aging complex. With the introduction of new automation and efficiency measures, Barra’s management strategy quickly earned a number of quality awards and was credited with producing a safer work environment.

That turnaround led to bigger responsibilities. By 2004, she had been plucked back from the factory floor and was named GM’s new Executive Director of Vehicle Manufacturing Engineering. She began churning out reimagined silhouettes of some of GM’s most iconic vehicles. Within five years, CEO Fritz Henderson decided it was yet again time to put Mary Barra’s outside-the-box attitude to the test. In a move many insiders thought ill-advised, Barra was given a VP role in GM’s colossal HR department – despite having absolutely no previous experience in human resources. However, the appointment actually made perfect sense. The year was 2009, and the American auto giant had just been forced to declare bankruptcy. President Barrack Obama was holding scrambled televised pleas to the America people to back the government’s bailout of GM, and in return the US government was naturally expecting the company to get its house in order fast. Henderson thought Mary Barra could help bring data-oriented efficiency to GM’s HR department in order to help it downsize. GM had to shed tens of thousands of jobs, and also reshape its culture.

Swinging the scythe
Barra quickly discovered GM was hiring three lead designers for every one product. By the time she earned herself a spot on GM’s executive committee in 2011, the company’s outlandish compensation and benefits packages had been brought into check and its hiring policy became one of needs rather than wants. Mary Barra was proving herself the firm’s new rock star. When she was appointed GM’s new senior VP of Global Development in 2011, Barra was raising eyebrows outside the company too. She was now serving the most important role ever held by a woman at GM, and simultaneously became the highest-ranking woman in the global auto industry altogether. Barra was given free reign over a $15bn budget and 29,000 employees based in five continents. As always, she relished the opportunity to make her mark on a company that tended to shy away from innovation. In her first year on the job, she rebuilt GM’s outdated engineering and fabrication processes and launched new development platforms.

However, her most important impact on the department may well have been her increasing distaste for red tape. By 2013, Barra was single-handedly responsible for scrapping a system of governance in which multiple executives were responsible for each development decision – rendering the individual completely blameless if a model fell through. In doing so, Barra was able to make 20 senior positions redundant. She was hardly able to enjoy a minor promotion to executive vice president of her department before she was told that the board wanted her to replace outgoing CEO Dan Akerson in December 2013. It was a challenge Barra couldn’t refuse; however, she was taking on the role at the onset of a boiling crisis.

Barra wasn’t on the job for a month when she was told executives had finally decided to act on a crippling PR nightmare and recall millions of vehicles with faulty ignition switches. Various members of the board appeared to have known about the fatal flaws in some of its vehicles for at least two years; however, it wasn’t in GM’s corporate DNA to tackle an issue like that head-on. Rather than issue a recall when the fault materialised, the board stuck with protocol by forming a committee that would commission an external party to file a report on the problem. From there, another committee oversaw an internal report on those findings, which took months. Afterwards, yet another committee took on the task of reading that report. By the time everyone had reached a consensus that action should be taken, at least 20 people had died. No one was surprised; after all, this sort of reactionary management had become a staple of GM’s corporate governance structure. Entrepreneur and politician Ross Perot best pinpointed the company’s weakness after GM purchased (and arguably ruined) his successful software company, EDS, in 1996. “The first EDSer to see a snake kills it”, he said. “At GM, the first thing you do is organise a committee on snakes. Then you bring in a consultant who knows a lot about snakes. Third thing you do is talk about it for a year.”

Quick reactions
By the time Mary Barra was brought into the loop concerning GM’s devastating ignition switch recall, the inability of those committees to act had already cost GM over $1bn. At least $600m alone was set aside for victim compensation. In that regard, it could be argued that Barra was more or less thrown under the bus in taking on the top job at GM, as she spent her first few months as CEO sitting in US congressional committees, being grilled by politicians over the scandal. In reality, Barra’s appointment has been a baptism of fire. In truly un-GM fashion, she has made absolutely no excuses for the company. Instead, Barra is looking to capitalise on this crisis by implementing much-needed changes to GM’s corporate culture.

She’s not just looking to improve communication. In her first nine months on the job, Barra’s primary focus has been to alter the way that GM executives behave. In the old GM, senior managers would huddle together in committees in order to plot how best to avoid bringing bad news to the board table. Barra has now witnessed first-hand what sort of damage that lack of accountability can inflict – and her experience in HR and communications will no doubt help spearhead efforts to eradicate such behaviour.

In 34 years at GM, Mary Barra has never encountered a single challenge she could not overcome. She certainly won’t encounter any problems ensuring GM maintains its grip on the global auto market. At present, the century-old firm is celebrating a return to an investment-grade credit rating, improving stock prices and back-to-back quarters of profitability. But Barra isn’t about to let the improving outlook go to her head. Under her tutelage, GM is saying goodbye to the days of minimal innovation. By 2016, Barra has vowed to reach 10 percent profit margins in North America and restore lacklustre profits in Europe. By 2017, she aims to roll out a self-driving Cadillac. That all starts with better corporate governance that holds people accountable for their decisions – and if Barra’s track record is anything to go by, she should be able to remodel GM’s decaying culture in record time.