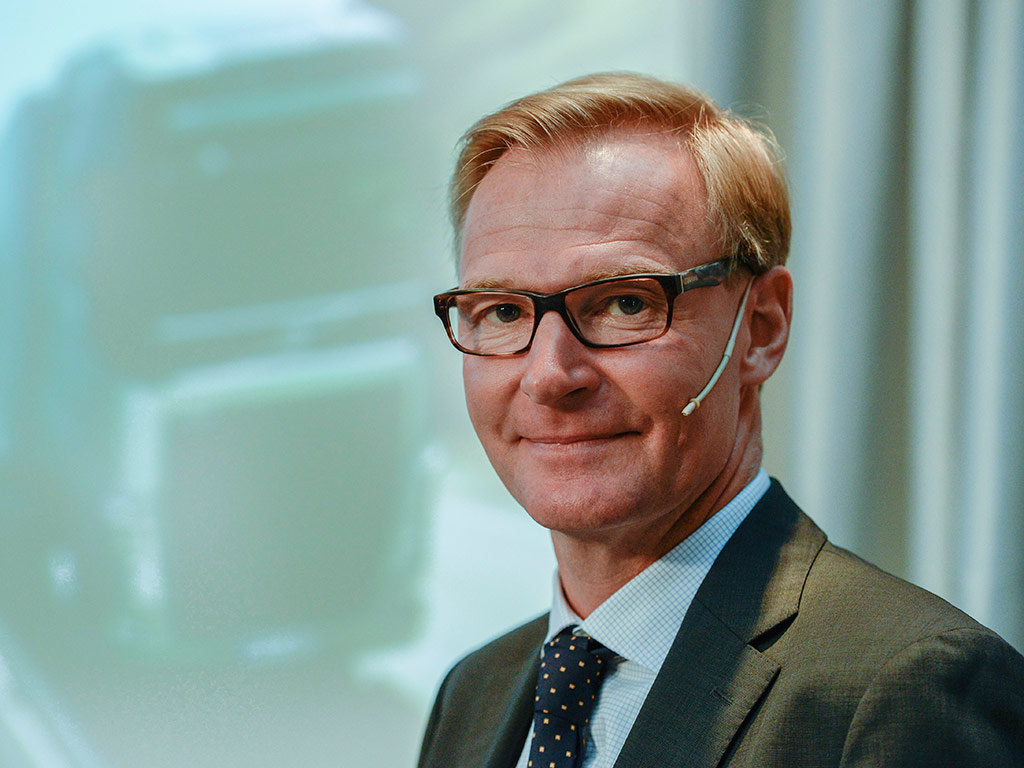 Almost three years on since his appointment as Volvo Group CEO, Olof Persson is confident about the company's future. His agenda includes an expanded product range and exploring opportunities in China
Profiles

Volvo Group’s Chief Executive Olof Persson is in the midst of heading one of the most ambitious company overhauls in decades, and has so far stripped the automaker of its excesses and realigned its goals quite considerably. Almost a century on from its initial establishment and only a short few years after the financial crisis broke, many are hoping that Volvo veteran Persson can put the multinational back on track and reaffirm its status as one of the world’s leading truck manufacturers. EDUCATION
Bachelor of Science in Business Administration and Economics, University of Karlstad

The Swede was named CEO in September 2011, and almost three years on it looks as though his appointment was a shrewd move on the part of the powers that be.

“Naturally, it is both an honour and a challenge to be provided with the opportunity to lead Sweden’s largest company,” said Olof Persson shortly after his appointment. “Volvo is a company with tremendously knowledgeable and committed employees, with a unique culture and with many strong and exciting brands and I am truly looking forward to the task.”

However, the company has since endured all manner of growing pains in the process of reaching its ambitious 2015 cost-savings target, not least of which being a 4,400 cut to its 115,000 strong workforce.

The master of restructuring
Regardless of the heavy sacrifices made thus far, even today Persson remains a surprisingly popular leader, and continues to inspire confidence in Volvo’s turnaround, owing to his proven ability to head companies through turbulent times. The Swede’s background is uniquely rooted in restructuring, and his appointment as CEO of Volvo Group quite naturally follows his work at Volvo Construction Equipment, where he expanded the company considerably over a four-year term.

“Olof Persson has performed remarkably well, first as president of Volvo Aero and then of Volvo Construction Equipment,” Louis Schweitzer, Chairman of the Volvo Board said in a company statement. “During his time at Volvo Construction Equipment in the midst of the financial crisis, he succeeded in restructuring the company and making it one of the most successful in its industry, in terms of both profitability and size – this was no small achievement.”

It is not only Persson’s past experience in heading two of Volvo’s subsidiaries that made him an ideal candidate for the role, but moreover, the very fact that his experience at Volvo stems as far back as 2006 is vital in better understanding the so-called ‘Volvo way’.

Informed by his past experience at Volvo’s construction equipment unit, Persson’s plan is to have the world’s highest operating margins in the heavy-equipment industry, and make as many cutbacks and structural changes as he deems necessary along the way. As such, the years ahead will most likely be characterised by structural change, as Persson attempts to bump up the company’s profit margin and modernise its operations.

Keep on truckin’
In recent months, Volvo has launched a new trucks range in Europe, and embarked upon a joint venture with Dongfeng Motor Group to improve upon its medium and heavy-duty commercial vehicles business and extend its influence further afield to Chinese markets. However, these ambitious new projects have not come without sacrifice.

“The year we have left behind us was characterised by extensive product launches, which involved a lot of hard work in all parts of the group and an elevated cost level,” wrote Persson in the company’s fourth quarter and full year report for 2013. “Although we still have a couple of quarters ahead of us before we are completely through the Group’s largest product renewal ever, this year will be characterised by efficiency improvements, including a reduction in activities and costs, as well as personnel reductions. This will play an important part in the work to achieve the Group’s strategic and financial targets.”

The company’s past year, all things considered, has made for a slightly inconsistent state-of-affairs and impacted on the truck maker’s performance somewhat. Nonetheless, although the Volvo Group is going through an ever-so-slight downturn at present, with fourth-quarter earnings down 17 percent year-on-year, confidence in the manufacturer is still relatively high.

Persson’s principle aim from hereon is for Volvo to focus on its core business and, as a result, do away with any existing inefficiencies. The CEO’s strategy in a nutshell is not to introduce an instantaneous overhaul, but to instate systematic change, and gradually ramp up the group’s operating margins as a result.

Restoring a reputation
However, it’s clear that investors are beginning to lose patience with Volvo’s step-by-step approach, a state-of-affairs best illustrated by the company’s shares, which plummeted some eight percent through 2013 alone. Nonetheless, Persson appears confident that he will lift the company’s operating margin by three percent come 2015 from where it would have been should the restructuring programme not have come to pass.

Granted, Volvo Group’s shares have been hit substantially, but there have still been a select few causes for celebration of late; among them being a fourth quarter operating margin improvement of four percent on the year previous and a net orders bump of 12 percent. Together the developments served to raise Volvo’s shares by four percent at the beginning of February, marking a surprisingly positive start to the year for the manufacturer.

“We have entered into 2014 with a new product portfolio that will strengthen the Group’s competitiveness,” says Persson. “We expect a slight improvement in market demand, mainly driven by China and Europe. We have seen a somewhat increased activity ahead of the spring season and our order intake was up seven percent in the quarter compared to last year, with general construction driving the improvement.”

Provided that the company can capitalise on newfound opportunities in China, an expanded product range, and a new slim line company structure, there is no reason why Volvo cannot become the world’s largest truck manufacturer ahead of Isuzu, Daimler, Toyota and Volkswagen. And when taking into consideration Persson’s proven experience in similarly sticky situations, the company’s prospects look that bit more promising.