In a curious mix of change and stability, Nestlé CEO Paul Bulcke has lived in seven countries around the globe, picking up six languages along the way, while remaining loyal to the food giant for thirty years. By Katie Llanos-Small 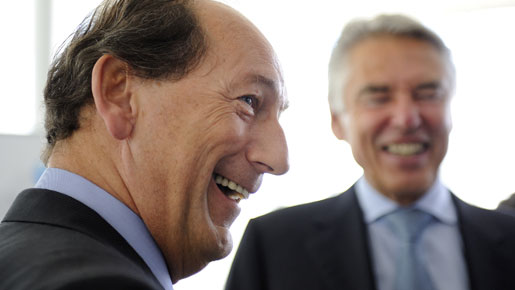 Paul Bulcke took up the role of chief executive during one of the most challenging times for Nestlé. Confirmed at a shareholders meeting in April 2008, the Belgian acknowledged that future months would not be easy.

“It will not be plain sailing all the way – far from it, as the financial turmoil of early 2008 demonstrates,” Bulcke told shareholders. He said that the company’s brands, which include Maggi, Perrier and Kit Kat, together with its global scale, solid R&D, and committed employees, represented significant advantages.

“It is up to us to reinforce and exploit these competitive advantages, for they permit us to stand apart from our competitors, and provide sustainable, profitable growth. Our world is a fast-changing one, it is true. But let us not forget that change is also a driver for new opportunities.”

The change Bulcke saw in his first year as CEO was not very positive, however. Rising global commodity prices and falling consumer demand were reflected in the company’s accounts. Organic growth reached just 3.8 percent in the first quarter this year, significantly down from the 9.8 percent the company achieved in the same period last year.

Nevertheless, the company maintained its forecast for organic growth in 2009 at five percent, and Bulcke greeted the first quarter results optimistically. The strength of Nestlé’s brands and its global presence would help it weather the economic downturn, he said.

Bulcke knows Nestlé intimately. He has spent thirty years working for the global food company, based in seven different countries over that period. His experience has given him a thorough understanding of not just the company’s international operations, but also its values, he says.
“At a personal level, I can identify strongly with Nestlé,” the 55 year old said last year.

Bulcke studied commercial engineering and completed a post graduate degree in management before beginning his professional career. His graduate school, Vlerick Leuven Gent Management School, now holds him up as one of its most inspiring former students: he beams out of the alumni homepage, a click away from a slickly-edited video where he talks about the value of his time at the School.

Bulcke spent two years working as a financial analyst for Scott Graphics International after university. This would turn out to be the only time he has worked outside Nestlé. In 1979, the food giant took him on as a marketing trainee at their headquarters in Vevey, Switzerland, and he has never left.

Bulcke arrived at another tumultuous time for Nestlé. Rising oil, coffee and cocoa prices had pushed up its costs, ending two easy decades of skyrocketing instant coffee sales. Bulcke followed company operations in Switzerland, Spain and Belgium as a trainee, before being shipped off to Latin America, with his wife and young children in tow. He spent 16 years in Nestlé’s marketing and sales sections in Peru, Ecuador and Chile.

Almost 30 years later, at the meeting that would see him elected as chief executive, Bulcke said he was “very far from imagining” that one day he would be company CEO when he left for Peru.

The 1980s were not easy times for any company operating in the region, with Peru stricken by hyperinflation and terrorism, and Chile ruled by dictator Augusto Pinochet. But it was a golden opportunity for Bulcke to gain first-hand experience of the emerging markets which have become crucial for Nestlé’s bottom line. He highlighted the importance of developing countries’ “growing populations and purchasing power” in his speech to shareholders last year.

“These countries represent prime markets for Nestlé, which aims to expand in those locations to better serve lower income groups.”

After paying his dues in South America, Bulcke returned to Europe in 1996, heading up markets in several countries – first in Portugal, then the Czech Republic and Slovakia, and finally in Germany.

In 2004, he was promoted to be the company’s executive vice-president in the Americas, in charge not just of the United States, but also Canada, Latin America and the Caribbean. During his four years in ‘Zone Americas’, as Nestlé brands it, Bulcke oversaw regional earnings before interest, tax and amortisation of goodwill grow 30 percent to 5.5bn Swiss Francs, and sales grow almost 20 percent to 33bn Swiss Francs.

The chief executive position opened last year, after the company decided to split the roles of Chairman and CEO. Company chairman Peter Brabeck-Letmathe had carried out both functions since 2005.

Bulcke was one of two shortlisted candidates, beating relative newcomer Paul Polman – now CEO of Unilever, a major competitor – after a comprehensive selection process with the board. Employees were in favour of the pick, Brabeck-Letmathe said in an interview with CNN afterwards.

Bulcke’s challenge now is to keep Nestlé ahead of its competitors as the economy improves. Competition is ‘intense’ in all its markets, Ildiko Szalai, packaged food company analyst at Euromonitor, says. In contrast to its rivals, Nestlé made no major acquisitions in 2008. Once the economy begins to improve, other companies may be in a stronger position as a result, Szalai says.

But Bulcke believes the Nestlé is on the right track. When he became chief executive, he assured shareholders the company had a solid strategy, and that he had “no plans to alter our chosen course.

“[Nestlé’s strategy] creates a platform for profitable growth that has proven itself to be one of the most vigorous in the industry. This will continue to guide and inspire our success through the present economic downturn.”

It is hard to doubt a man who knows Nestlé so closely.