The CEO of UBS is unafraid of making bold statements on behalf of his industry. Looking at his past achievements, surely few would question his authority and knowledge of all things banking 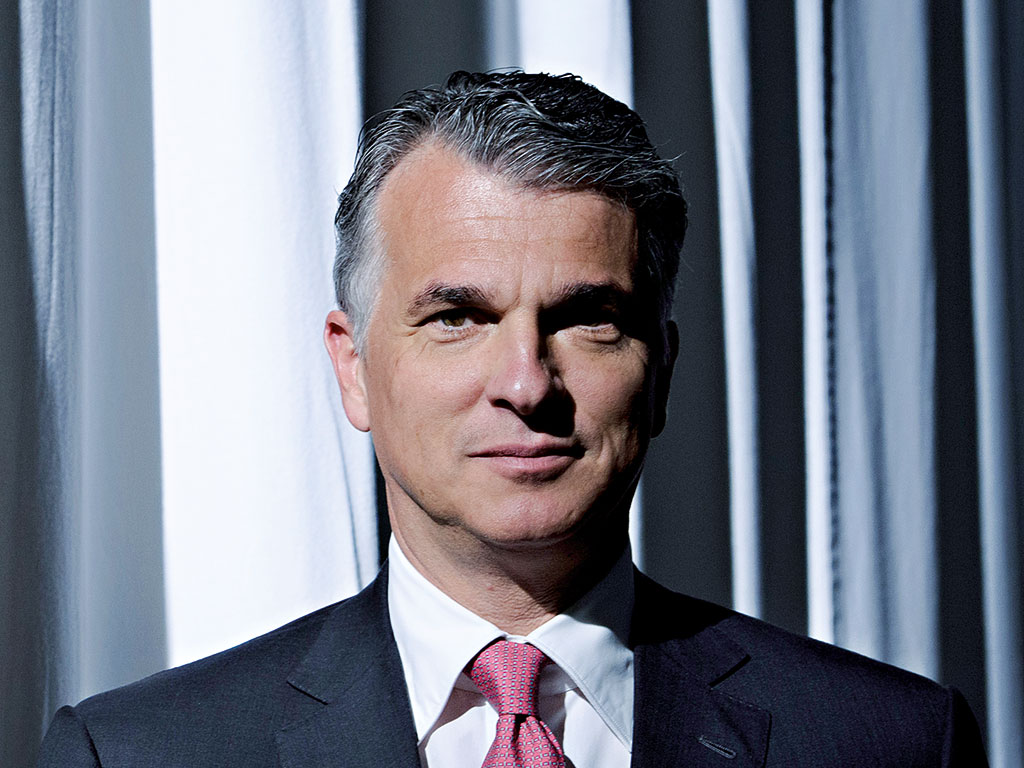 Sergio Ermotti, CEO of UBS, controversially told bankers earlier this year that it's ok for them to make mistakes, provided they're made in good faith
Profiles

Earlier this year, Sergio Ermotti reassured a 300-strong crowd of finance experts that it’s ok for bankers to make mistakes, provided they’re made in good faith. With consumers having grown frustrated at the regularity with which bankers have escaped punishment, Ermotti’s statement, as it was reported by the Financial Times, risked straining the relationship between banks and customers further. Yet the distinction between those who deliberately break the rules and those making honest mistakes was one those in attendance recognised all too well, as they and others in financial services look to repair the damage done to their industry’s reputation.

Defender of the faith
The sentiment expressed by Ermotti in this instance, while controversial by some standards, was echoed earlier in the year in a report authored by PwC. According to the research, financial services managers are twice as likely to behave unethically if they feel anxious about the need to compete with their colleagues, and the prospect of winning, rather than a fear of losing, is surely the answer to allegations of unethical behaviour. In short, the report argues that you can’t scare people into doing the right thing.

The report coincides with a growing tendency across Europe to ease the pressure weighing on major banks, and the focus for now rests more with the issue of stability – with banking central to it. Where banker bashing has long been a sure-fire route to additional votes in years past, the industry’s role in kick-starting the European recovery is undeniable, and policymakers have gone to great lengths to make this clear to consumers.

EXPERIENCE
1975: Aged just 15, Ermotti left school and began learning the specifics of the banking trade at Cornèr Bank in Lugano

1985: Having completed the Advanced Management Programme at Oxford University, Ermotti joined Citibank as a trader

1987: After rising to vice-president as Citibank, he moved to Merrill Lynch and steadily rose through the ranks over 16 years

2011: Having joined UBS as a divisional CEO, Ermotti was unexpectedly made group CEO after just a few short months, replacing Oswald Grübel

“We are not suggesting that rules and penalties for bad behaviour should be abandoned, as it’s essential that people know what is acceptable and what isn’t, and criminal behaviour should be punished. This is about the sorts of pressures that push ordinary, well-meaning people into behaving less ethically that they would want to by cutting corners and hiding mistakes”, said PwC’s people and change director and science specialist Duncan Wardley, in the report. “Regulators and financial services leaders can change behaviour within companies by increasing emphasis on the positive outcomes of good performance, instead of solely focusing on the negative outcomes of the bad behaviour they want to stamp out.”

Ermotti’s statement also packed something of an extra punch, considering the circumstances surrounding his initial appointment; in 2011 his predecessor Oswald Grubel was forced to resign after a $2.3bn trading scandal. In recent times, UBS has also been hit with a $1.5bn fine for its role in the Libor fixing scandal, $1.4bn for forex rigging, and another $780m for tax evasion. The comments made by Ermotti, therefore, serve to illustrate that this is a man who is neither afraid to voice his opinions nor to take a stand on behalf of banking, in a period where many in his position would rather tread lightly.

The executive’s attempts to dispel the culture of fear in banking are far from the only comments he has made in defence of the industry in recent times, and the concept of a ‘degree of tolerance’ is something he believes should extend to the issue of capital requirements for major banks. Speaking again in defiance of banker bashing, Ermotti warned that capital requirements for major names in Switzerland could impose overly excessive burdens on lenders.

Essentially, he argued that banks should not only be allowed to take risks, but actively encouraged to do so, and the clampdown on banking in recent years has made risk a dirty word, when in fact it’s an essential component of the banking system.

“Life is hard enough, and I think this constant lecturing on ethics and on integrity by many stakeholders is probably the most frustrating part of the equation”, were his words to The Wall Street Journal at Davos last year. “We are far from being perfect…but it’s not going to be very helpful to be constantly bashing banks.” Here, more so than at any other point perhaps, is where Ermotti’s reputation as a staunch defender of the banking sector, and an outspoken one at that, was made. Judging by the bank’s performance under his reign, his attitude has served him well.

High-stakes hire
Appointed in April 2011 to run the bank’s European, Middle Eastern and African businesses, the executive benefitted soon after from a $2.3bn trading scandal that made Oswald Grübel’s place at UBS untenable. Having joined barely five months earlier, Ermotti was made CEO of the then 152-year-old institution, and he has since gone on to demonstrate that sometimes less is more in banking. “For sure, I didn’t leave Zurich to go to Singapore that week thinking that I was going to come back as a CEO”, said Ermotti, speaking in an interview with The Financial Times. “It was a mix of wow, ok, happiness. But also realising it would not be easy.”

Born in Switzerland, in the Italian-speaking canton of Ticino, Ermotti took to banking at a very early age, starting work at Cornèr Banca at 15 where, despite a desire to train as a sports teacher, he went on to learn about trading and obtained a certificate in Swiss banking. After graduating from the Advanced Management Programme at Oxford University, Ermotti enjoyed a brief stint at Citibank before joining Merrill Lynch in 1987, where he held various positions within equity derivatives and capital markets over the course of the next 16 years.

Before making his way to UBS, however, the Swiss executive joined UniCredit in 2005 as head of the markets and investment banking division. By 2007, he was group deputy-CEO, and was responsible for strategy at the corporate investment and private banking units. Although there’s little to differentiate Ermotti’s career trajectory from that of rival bankers, his decision to join UBS was one that raised a few eyebrows.

In stark contrast to some of Ermotti’s earlier employers, UBS at that time did not necessarily rank alongside the world’s leading banks, yet a leading position in Switzerland and an impressive wealth management arm was enough to convince him to join. In his first statement as CEO, and in the shadow of the recent trading scandal, Ermotti said: “We are aware that we are facing turbulent times externally, and this latest incident is only adding much more necessity for us to react. But let’s not forget that UBS is one of the best-capitalised banks worldwide.”

On his arrival, Ermotti immediately set about outlining a plan to offload 15 percent of the bank’s workforce and withdraw from parts of its fixed-income trading business, thereby resulting in a more streamlined operation. Cuts to the investment side of things, together with a laser-sharp focus on wealth management, are part of what Ermotti deems necessary changes, not just for UBS but for the banking sector as a whole. “By acting now, we are getting ahead of our competitors and reshaping our business so that it can deliver sustainable results over the long term”, he wrote in a staff memo.

Now, almost five years on from his appointment, Ermotti has reinvigorated a Swiss institution that, on his arrival, was some way short of its present standing. And, while European rivals Deutsche Bank and Credit Suisse have yet to come to terms with a new operational landscape, UBS is “in a unique period of strategic clarity”, as Ermotti so nicely put it.

Bright future
Endowed with the advantage of not having to implement much in the way of additional changes, UBS has been able to attract new talent, pay higher bonuses and boost profits ahead of its closest competitors. Going by figures for the first half of 2015, investment bank profits were up 32 percent on the year previous, and all while Credit Suisse suffered an eight percent decline at its investment unit.

For his troubles, Ermotti became the bank’s highest-paid executive when, in 2014, he pocketed €10.3m and knocked Andrea Orcel, CEO of UBS’ investment bank, off the top spot. According to the bank’s annual report, the increase was due largely to the executive’s not-insignificant part in shrinking its balance sheet, in bolstering its capital requirements, and in de-risking unprofitable areas of the business. However, Ermotti’s work doesn’t stop now that the pressure on UBS is lessened, and there is a great deal more to do before faith among customers is restored and the bank is more adequately equipped for a fast-moving financial services sector.

“As bankers, our watchwords have long been speed, security, discretion and convenience. Yet, in today’s digital world, these concepts have renewed importance”, wrote Ermotti on his blog. “Financial services firms today must possess an intellectual desire to understand how technology can help them adapt to changing economic forces and new client and employee behaviours. They also need to be open to finding some answers outside their own walls. The companies that fully recognise and embrace these beliefs will be leaders in shaping the future of the industry – how it leverages the latest digital capabilities, how it responds to the changing nature of work, and how it operates amid a new regulatory/economic landscape.”

Under Ermotti’s watch, innovation and digitisation are the two single most important strategic priorities for the bank going forward, as it enters a new chapter, free of the pressures that have dogged it in years past. With initiatives such as the ‘Future of Finance’ challenge, which invites people to contribute ideas that might transform the sector, and a number of start-up partnerships in the works already, the bank is committed to building inclusive and open relationships with consumers and competitors.

With a bold executive at the helm and a strategic plan in place at least for the immediate future, UBS is faring far better than its rivals, and the challenge now is whether the bank can survive and thrive by collaborating, rather than competing.