Tidjane Thiam has spent his entire career combating prejudice through hard work and excellent results. Now, as CEO of Credit Suisse, he has a chance to make his mark in the banking world 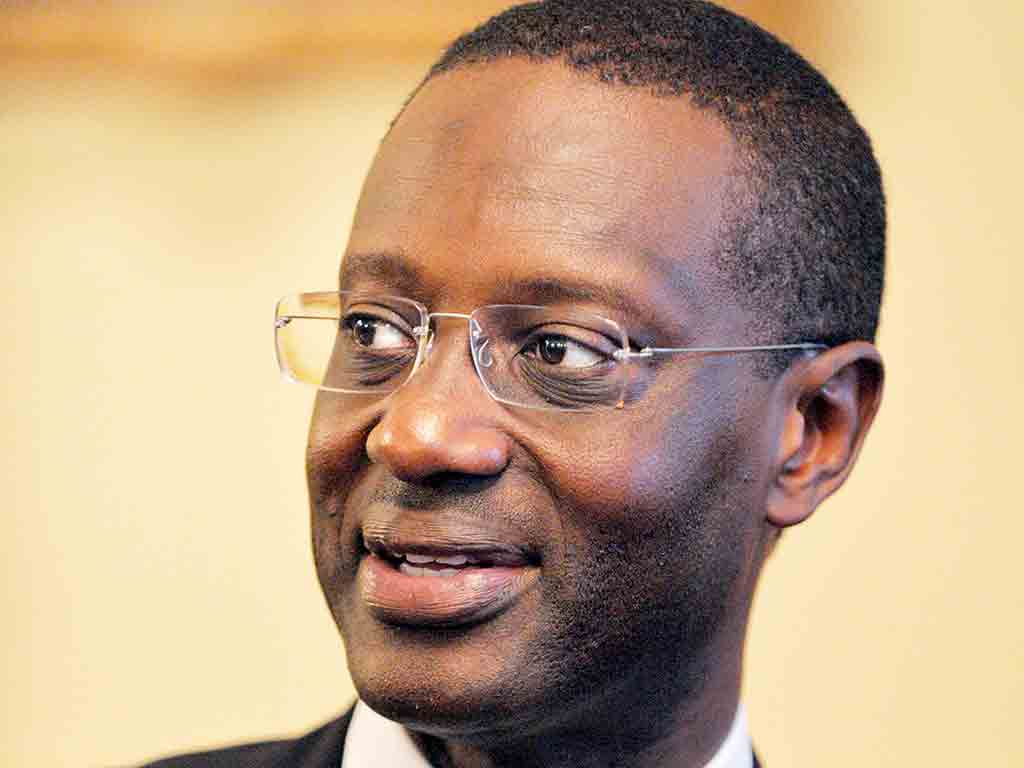 French-Ivorian born Tidjane Thiam has had a much more varied career than many of his contemporaries, having worked in the government and been CEO of insurance provider Prudential
Profiles

The news in March that Credit Suisse, one of the world’s leading private banking institutions, was hiring a new CEO with no experience of the industry may have surprised some who were unaware of the background of Tidjane Thiam. However, for those familiar with the career of the Ivory Coast-born Prudential CEO – who will take the helm at Credit Suisse in June – the announcement would have come as no surprise.

Widely praised for his leadership of the UK’s leading insurance provider over the last six years, French-Ivorian Thiam’s three-decade career has been far more varied and interesting than many of his contemporaries. It has included a stint in politics in his home country, roles at consultancy firm McKinsey, and the ground-breaking achievement of becoming the first black person to lead a FTSE 100 company.

Born in 1962 in the Ivory Coast, into two prominent families, Thiam’s early life and education was largely spent in France, where he also holds citizenship. His heritage is steeped in the history of both the Ivory Coast and nearby Senegal. Amadou Thiam, Tidjane’s Senegalese father, moved to the Ivory Coast in 1947, where he worked as a journalist before joining the post-independence Houphouët-Boigny regime, and serving 10 years in the country’s government. It was here that the senior Thiam met his wife, Marietou, who was also a niece of the Ivory Coast’s first President, Félix Houphouët-Boigny. Amadou was awarded the highest honour in France when he was made a Grand Officier de la Legion d’honneur by the French Government for his work. Habib Thiam, Tidjane’s uncle, also served as Prime Minister of Senegal for a decade.

EXPERIENCE
1988: After becoming the first Ivorian graduate of the École Polytechnique, Thiam entered management consultancy with McKinsey in Paris, remaining in the industry for eight years
2004: At the request of President Henri Konan Bédié, Thiam returned to the Ivory Coast, holding a number of positions before becoming Minister of Planning and Development
2006: Following a coup, during which he was held under house arrest, Thiam returned to France to become a partner at McKinsey, before moving into insurance with Aviva
2014: After making a name for himself in insurance, becoming CEO of Prudential in 2009, Thiam was selected to succeed Brady Dougan as CEO of Credit Suisse

Thiam’s education was one of considerable achievement. In 1982, he became the first Ivorian to pass the entrance exam to Paris’ famous École Polytechnique, before studying at Écolate Nationale Supériere des Mines de Paris, where he graduated in 1986. That same year, Thiam secured a scholarship to the highly regarded INSEAD to do an MBA, alongside the McKinsey Fellows Programme in Paris. In 1989, he did a brief stint working in Washington DC for the World Bank, as part of its Young Professionals programme. This was followed by his return to McKinsey, where he would spend his time between Paris and New York for the following four years.

Political player
It was in 1994 that Thiam returned to the country of his birth to begin a career in politics. It began after the newly installed President Henri Konan Bédié requested he return to become CEO of the National Bureau for Technical Studies and Development (BNETD), an infrastructure development and economic advisory body. The role gave him a seat in the government’s cabinet, and included the task of negotiating with the IMF and World Bank. By 1998, he had been made chairman of the BNETD, before officially joining the cabinet as Minister of » Planning and Development. Highly regarded for bringing in the private sector to help spur investment, he was responsible for starting projects that include the Azito Power Plant, and the modernisation of Abidjan Airport.

Encouraging privatisation within many key industries, such as telecoms, electricity, aviation, rail and agriculture, Thiam helped to modernise the Ivory Coast’s economy and bring in much-needed outside investment. His successes led to the World Economic Forum naming him one of its 100 Global Leaders for Tomorrow in 1998. The following year, the organisation named him as part of its Dream Cabinet of global government ministers.

However, his time in government was cut short after the Ivory Coast’s military staged a coup. While it was taking place, Thiam was in Paris. Upon hearing the news, he flew back to find answers, only to be placed under house arrest by the new regime. He told The Guardian in a 2007 interview: “It was a very strange situation. The people who do a coup are as scared as the victims of a coup, because they are afraid everything will go wrong and they will be arrested. So everyone is hiding. The victims of the coup are hiding and the perpetrators of the coup are hiding too, so it is actually very difficult. I wanted to get to the general who was leading it, but no one knew where he was.”

While under house arrest, Thiam was offered the position of chief of staff by the new head of state, General Guéï. However, he chose instead to return to Paris and took a role as partner at McKinsey, where he became one of the most senior members of its financial business.

Thiam has described his time in politics as a tough period, in which he helped govern a country that had gone through a difficult period, in a part of the world where regimes could be particularly ruthless. He told The Guardian: “Basically, for me, in the third world you have two kinds of regimes: you have regimes that kill and you have regimes that don’t kill. And I was very proud to be an Ivorian until 1999, because we were in a country where politics didn’t kill.”

He added that his strategy when in government was to be pragmatic and to trust that acting in a democratic, non-violent way was the right approach. “Do you go in and try and do whatever you can or do you stay outside and try to promote regime change? I’m profoundly a democrat and I am completely opposed to violent regime change. I just believe that it is always counter-productive.”

The world of politics isn’t something that he seems keen to return to, favouring his business career. “I have always said I am not a politician. I like the business life. I like to keep some faith in human nature, and one thing I feel about politics is that if you want to lose any faith you have in people, yeah, just stay in that business. I wanted to keep a few illusions”, he claimed.

Back to business
Returning to the world of business, Thiam quickly rose through the ranks at McKinsey, before joining British insurance firm Aviva in 2002. He started as group strategy and development director, before rising to managing director of Aviva International, then CEO of Aviva Europe. After then-CEO Richard Harvey resigned in early 2007, Thiam was widely rumoured to be a frontrunner for the top job at the whole group, and he was eventually appointed in May. However, he lasted only a few months in the role before being poached by rival Prudential later in 2007, joining as CFO.

It didn’t take Thiam long to establish himself at Prudential, quickly rising to the role of CEO in 2009, at the height of the global financial crisis. The appointment was ground-breaking for the UK, as it represented the first time a black person had become CEO of a FTSE 100 company. While he was undoubtedly chosen for his ability and experience, Thiam says that he had frequently found race to be an issue when rising through the ranks in the business world.

In an interview with The Guardian, shortly after becoming CEO of Aviva, Thiam spoke of the struggles that he had faced when previously applying for senior jobs as a result of his race. Recalling when he was contacted by a headhunter regarding a role at Aviva, Thiam says he had to insist on a condition before agreeing to an interview. “I said, well, I am very happy to interview. But frankly, you need to tell them that you found someone who is black, African, Francophone and 6ft 4in. I said to him, frankly, I will not go to London unless they tell me I have a fair chance to get the role. I was tired of the usual answer, which is ‘we like you, you are a great guy, but this is a division with 10,000 employees and we just don’t think they would understand having someone like you at the helm’. I was told that a number of times and I was getting a bit tired. Because, you know, you motivate yourself, you go through the round, you do interviews.”

Thiam’s time at Prudential has been characterised by the need to battle against tough market conditions. An ambitious attempt to buy the embattled Asian arm of insurance firm AIG for $35.5bn eventually failed. While he was criticised for offering so much for the firm, he was vindicated when AIG was floated on the Hong Kong stock exchange and rapidly rose well above the amount Prudential had offered. Since that period, he has delivered steady growth in business at the firm, increasing the share price by 150 percent over the course of his reign.

Swiss credit
Ultimately, Thiam’s success at Prudential caught the attention of Credit Suisse, who have been seeking a replacement for outgoing CEO Brady Dougan. The American joined Credit Suisse just before the start the financial crisis, and has spent eight years dealing with regulatory changes and legal challenges. Announcing the appointment, Credit Suisse Chairman Urs Rohner thanked Dougan for his “exceptional commitment”. However, he welcomed the opportunity to bring in a fresh new leader in the form of Thiam. “With Tidjane Thiam, a strong and distinguished leader with an impressive track record in the global financial services industry will take the helm of our bank. His extensive international experience, including in wealth and asset management, and in the successful development of new markets, provides a firm foundation for leading Credit Suisse. As CEO, he led Prudential to great success in challenging times.”

Thiam was equally enthusiastic about the move, adding: “I am honoured to be offered the opportunity to lead this great institution, and particularly to follow Brady, who has been such a distinguished CEO. Credit Suisse has an exceptional business, great people, a solid strategy and strong momentum. I look forward to working with the senior management team, the board of directors, and all the employees of Credit Suisse to further the strong momentum of the franchise and serve our clients in Switzerland and around the world.”

Thiam has established himself as both pioneer and pragmatist over his 30-year career. Hailed as one of the leading lights in British business, it is unsurprising that a bank of Credit Suisse’s reputation has chosen him as its new leader. Investors quickly welcomed his appointment, with an eight percent rise in the value of the bank’s stock after the announcement. Credit Suisse will be hoping that he will be able to deliver yet more growth in the future.