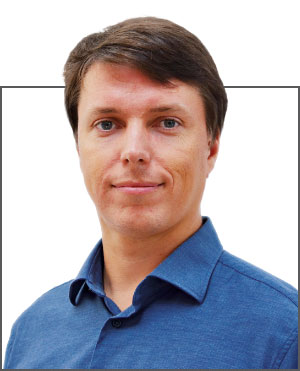 With a degree in metrology engineering from Moscow State Technological University (known as STANKIN), a master’s degree in physics from the University of Geneva and a PhD with a focus on aerosol detection devices, Denis Kiselev is as qualified as they come. Following his extensive studies, Kiselev stayed at the University of Geneva for two years as a scientific collaborator. In 2014, however, he decided to use his knowledge and experience to start his own project. Along with co-founder Svetlana Kiseleva, he established Plair, a real-time aerosol detection start-up.

In 2016, Kiselev received the Hydro-Meteorological Equipment Industry Award for best young engineer as a result of his work in environmental systems and services development. As well as founding Plair, Kiselev has authored numerous scientific articles and holds several patents.

Headquartered in Geneva, Plair’s Rapid-E, or real-time airborne particle identifier, instantly and autonomously detects particles such as allergens and bioaerosols. The detectors are useful to a number of industries, but have found the greatest uptake as pollen-counting and bioaerosol-monitoring solutions.

Rapid-E uses laser-sensing technology and artificial intelligence to identify and count multiple pollen species, among other particles, making it the world’s most advanced allergen detection solution and the first system to count pollen by species. It also offers cloud-based data processing and an online dashboard for customers, meaning meteorological and environmental services can improve their forecasting models and better alert populations affected by respiratory diseases, hay fever and asthma.

Plair is working hard to ensure its products are effective in the harshest of conditions: between June and September 2017, a Rapid-E machine operated on a research vessel that made its way around the Arabian Peninsula. It measured pollutants in extremely high temperatures and endured physical shocks from heavy swells, collecting a large amount of comprehensive data along the way.