As the way we work changes, businesses must move with the current to find success

Digital technologies are rapidly changing the world of work. The Project Management Institute can supply the resources, tools and knowledge that businesses need to adapt and thrive in this new environment 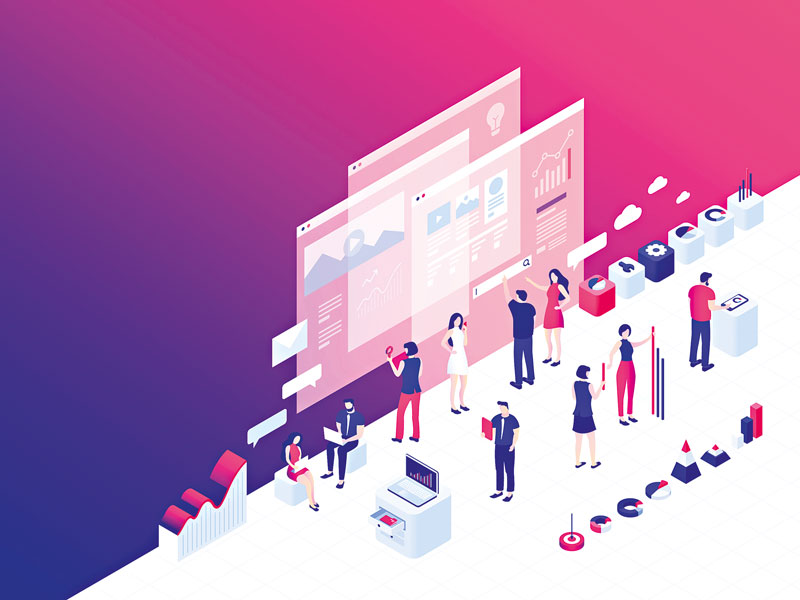 As the world of work becomes more fragmented and employees switch between projects on a more regular basis, the importance of transferrable skills will grow
Management

The world of work is fast-moving. Digital technologies are developing at such a rate that just as businesses become accustomed to new ways of operating, things have moved on again. It’s for this reason that organisations need to be more prescient than ever, looking ahead and pre-empting future developments.

In a bid to support companies in their efforts to remain agile, the Project Management Institute (PMI) conducts an in-depth annual assessment of long-term global trends and their impact on project professionals. In particular, the organisation looks at capital flow, natural resource allocation, macroeconomics, technology, politics, demographics, climate and the environment.

Every industry imaginable is being forced to adapt, leading academics, countries and individuals to think about how work is done – and how it will be done in the future

With regard to infrastructure, technology and demographics, a confluence of factors will have an enormous impact on project professionals, as well as society more broadly. It is vital to remember that projects aren’t delivered in a vacuum: they provide huge value and make strategic visions a reality. PMI does not simply consider how these trends affect its members, but how, through their work, team members can help shape the future.

A great deal of attention is being paid to technological disruption and the subsequent need for extensive digital transformation. Every industry imaginable is being forced to adapt, leading academics, countries and individuals to think about how work is done – and how it will be done in the future.

In his role as president and CEO of PMI, Sunil Prashara has a unique vantage point over the business world and the global economy. The PMI membership consists of some three million project professionals around the world, whose roles range from senior leadership positions to those with hands-on responsibility for implementing strategic initiatives for businesses, governments, NGOs and other organisations. Prashara spoke with European CEO about how PMI is preparing project experts to shape the future of an increasingly complex world.

Skills for life
Employees are no longer happy to stay put in one role for decades. A 2018 survey by LinkedIn found that job-hopping is more popular among younger generations, with Generation Z changing roles frequently to give their career (and earnings) a boost. But switching jobs does not only provide financial rewards: it also gives employees fresh impetus and new challenges. Businesses can tap into this trend, without losing valued members of staff, by ensuring that work never becomes stale. “At PMI, we believe that pretty much everything is going to become projectised,” Prashara explained. “By this, we mean that the traditional way of working – where you join an organisation, are placed in one department and then stay in that department for the rest of your career – is not going to hold in the future.” Instead, individuals will be deployed for projects anywhere in the organisation based on their skills and capabilities. This will allow them to work on specific programmes, projects and activities before moving in line with their organisation’s shifting needs.

Businesses need to consider everything they do as a project of one kind or another, regardless of scale. This mindset is likely to become increasingly commonplace as organisations take a more structured approach to placing their resources and efforts. The projectisation that is occurring is in part the result of technological disruption, which has made it possible to operate in a more systematic and codified manner.

This new way of working – which PMI calls ‘the project economy’ – demands flexibility, malleability and adaptability. “Project management is grounded in knowledge, standards, methodologies and best practices,” Prashara explained. “People actually start acquiring these types of skills very young, which is why I believe that project management skills are life skills.”

Across numerous industries, the emphasis on life skills is increasing because much of what were traditionally thought of as hard skills is being automated, leading organisations to look for what would typically have been called soft skills, such as teamwork, creativity and adaptability. However, Prashara doesn’t think of these as soft skills at all.

“I prefer the term that Professor Behnam Tabrizi from Stanford University uses,” Prashara said. “He calls things like empathy, understanding of culture and the ability to… communicate effectively – not just by sending text messages, but actually being able to talk – ‘power skills’.”

As automation proliferates, there will be an opportunity for new skills, new types of jobs and new types of capabilities to be developed

As the world of work becomes more fragmented and employees switch between projects on a more regular basis, the importance of these power skills will grow. Knowledge of a particular market, product or service will still prove valuable, but it may not always be relevant as employees shift between multiple tasks. Transferable skills, on the other hand, will always be in demand.

Around the world
This year, PMI conducted research into long-term workplace trends. One finding was that concerns about climate change, natural resources and the environment would become intertwined with the oil and gas industries. The report questioned what impact the movement away from oil and gas will have on countries whose economies are built on fossil fuels. It found that many are looking at other sources of income, such as tourism or healthcare, to diversify their economies. This will require huge amounts of construction and infrastructure activity.

In addition, as people look to alternative sources of fuel, the electric car will start to have a significant impact across industries – a great example of how it’s not just petroleum providers that are being disrupted, but the whole automotive industry. “You have entire industries and countries that are looking to stay competitive and relevant in the face of rapid change,” Prashara said. The infrastructural changes that are surely coming should not serve as a distraction from the rapid technological developments that are also set to emerge.

“If you just look at demographics, the anticipated population growth in Africa over the next 30 years means 700 million new housing units will have to be built – that’s more than 60,000 a day, every day, for the next 30 years,” Prashara explained, referring to a TED Talk by Christian Benimana, Director of the African Design Centre. “Then think about how many schools, universities, hospitals and other resources will be needed to sustain an extra billion people. This is just in Africa, but other parts of the world will experience similar developments.”

In China, for example, the Belt and Road Initiative (BRI) is a trillion-euro infrastructure programme that will have an impact on more than 126 countries. The BRI will need to be accompanied by a proliferation of programmes, projects and infrastructure work. Technological and human resource deployments will also be required to facilitate the numerous projects that will be set up around the world.

A personal touch
Of all the technological developments seen today, artificial intelligence (AI) has probably received the most attention because of the threat – or perceived threat – it poses to human jobs. But AI working in tandem with humans should be viewed as a great opportunity. It is true that AI will lead to certain jobs becoming automated, which will certainly result in redundancies in the short term, at least. While redundant workforces can represent major headaches for governments, they still offer significant opportunities in the long term.

“I think the way Europe is handling this disruption from an ethical perspective is brilliant,” Prashara said. “Europe is taking a measured approach and recognising the challenge and responsibility of retraining workers for new roles. Companies know they need to transform and stay relevant, but they are doing so in a way that considers the human impact. They are ensuring that there are training programmes for people who are laid off.”

In this respect, AI’s impact on the workforce of tomorrow is certainly an issue, but it also provides a chance to retrain people. As automation proliferates, driven by an organisational need to stay economically relevant, there will be an opportunity for new skills, new types of jobs and new types of capabilities to be developed. “The other threat that should not be ignored is that if everything is codified and carried out by AI, the empathy, judgement and gut feel of an organisation can be ripped out,” Prashara added. “When that happens, companies start to lose some of their personality – and even their effectiveness.”

Some businesses are already using AI and other forms of technology to their advantage – particularly in terms of boosting customer centricity. Today, customers are much more informed than they were in the past, primarily because of the many digital channels that are readily available to them. This also means that there are many more ways for businesses to address any problems that customers may be having.

While AI can provide firms with information about their customers, it is yet to understand nuance or develop the judgement that people bring to a task. Technology may let companies know when they have an unhappy customer, but a human touch is more likely to remedy the situation.

The youth of today
The sheer scale of change taking place around the world can be disorientating for businesses. This is not simply the result of new types of technology; prospective employees and their expectations are also changing. “Young people today are looking for companies that have some kind of ethical standing and social impact – those that believe in something beyond just making money,” Prashara said. “I think this is an outlook that more organisations should be adopting. Ultimately, it is a sustainable way of working because companies that are centred around values will be in a great position to attract talent in the future.”

These values should run through a business’ operations, regardless of the industry they are based in. Managers can set the standard by considering the social, environmental and ethical impact of the work they are carrying out. In addition, granting employees the time and resources to carry out projects that have motivations beyond boosting company profits is a worthwhile move.

Looking at European organisations specifically, there is a tremendous opportunity to be had. The continent is home to many industry-leading businesses, but they are facing competition from the East and West. To ensure they can source the talent they need, they must adapt to the shifting demands that young people are placing upon their employers. If businesses can achieve this, there is no reason they cannot make a huge impact on the European, and world, stage.

“If you look at the footprint of the BRI, for example, China can’t do it by [itself],” Prashara said. “Beijing is going to have to work with governments and people in the countries where BRI projects are being developed in order to drive the programme forward. Thought leadership, expertise and knowledge for the projects will come from all over the world – but certainly Europe will be a leader.”

Going forward, European companies need to look both outwards and in. Partnerships with firms based in China, the US and elsewhere will result in the fruitful exchange of ideas and collaborations that will ensure projects become more than the sum of their parts. Making the most of new technologies, employee skills and talented new recruits will prove vital. If organisations can bear this in mind, they can shape the change around them instead of just being affected by it.