As Philipp Hildebrand leaves SNB, the banking sector looks on with doubt 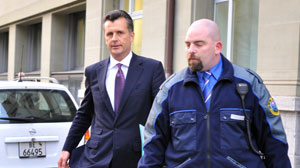 Philip Hildebrand is a banker who was born in Switzerland in 1963. He became the Chairman of the Governing Board and Head of Department I (International Affairs, Economic Affairs, Legal Property Services) of the Swiss National Bank, which has its headquarters in Zurich, on January 1, 2010.  The Swiss Federal Council appointed him to the position. He had spent the previous seven years as a member of the governing board.

Hildebrand is a highly educated man, having attended prestigious universities such as Oxford and the University of Toronto, following which he started his career at WEF. He worked for several companies around the world prior to joining SNB in 2003, where he was the youngest ever policymaker. He became one of the bank’s rising stars, moving rapidly up through the ranks.

Problems first arose at SNB when the bank started to make losses on exchange rate interventions during the period between March 2009 and June 2010. During this period foreign currency reserves at the bank reached CHF200 billion. However when the country’s currency appreciated there were massive losses, to the tune of CHF26.5 billion in 2010 and CHF11.7 billion during the first half of 2011. The interventions were considered a ‘costly failure’ although the SNB has defended the actions as, at the time they were instigated, they made perfect financial sense.

When Philipp Hildebrand’s wife made a CHF60,000 profit on a currency transaction he tried to prevent the trade from taking place, and in January 2012 found himself having to deny accusations of insider trading. He was quoted as saying it was a smear campaign, as the incident was played out through national and international media outlets. He believed that the secrecy laws in Switzerland were endangered due to the accusations and claimed that he had always acted within the rules. The trade was apparently made in the form of a joint account and the fallout from the accusations saw Hildebrand tender his resignation on 12th January 2012, as he could not prove that he was unaware of the transaction; his position was thus deemed to be untenable.

As his resignation was voluntary, Hildebrand is still entitled to claim a full 12 months’ salary payment as a payoff from SNB. This is believed to total around £600,000.

Hildebrand is also prohibited from working for another bank until at least January 2013. His plans for the immediate future are not currently known, but his place as a member of the Group of Thirty (G30) is to remain unchanged for the foreseeable future. The executive director of the organisation, Stuart Mackintosh, has confirmed this decision. The G30 is a financial think tank that is private and non-profit. It draws on the talents of experts in their field, from academic institutions, the public sector and the private sector. The aim of the G30 is to encourage a stronger understanding of both financial and economic issues and to determine the repercussions of decisions that are taken in the financial world.