Restructure – before it’s too late

The earlier a company admits a crisis, the greater the chances of a turnaround. Still, many only act when it’s too late 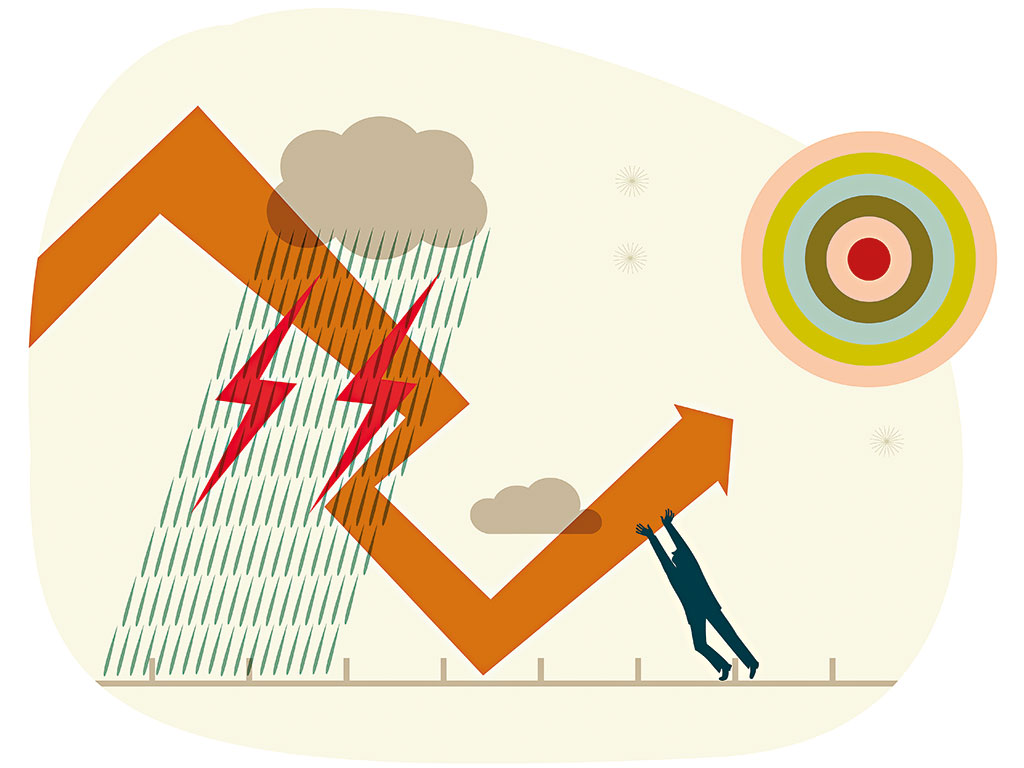 ‘Company to be restructured’, ‘everything to be put to the test’, ‘restructuring necessary’ – companies that appear in the press under such headlines often have a hard, uphill struggle ahead of them. Nevertheless, such news also has its good side. The crisis-stricken company is taking action – trying to turn the boat around by means of a restructuring programme.

Restructuring processes can be initiated either internally or externally. Internal initiators may be the executives (chairpersons, managing directors), the supervisory bodies (supervisory or advisory board members) or the owners (partners, shareholders). The basis for this is that the instruments required for detecting a crisis at an earlier stage are in place. As regards corporate planning requirements, the legal system only includes rudimentary rules. However, the requirements grow sharply with the onset of insolvency. It is, therefore, up to the stakeholders to lay down suitable rules in the company’s memorandum and articles of association, management guidelines or information regimes, so that the causes of a crisis can be recognised well in advance.

The conventional external initiators of restructuring processes are lending banks. On account of the provisions in loan agreements (e.g. covenants) and banking supervisory regulations relating to risk exposure, banks only reach positive loan decisions if the borrower has proof of restructuring capabilities.

However, while banks were previously reliable initiators of turnarounds – on account of harsh banking supervisory regulations – restructuring measures are now often initiated inconsistently or too late. One reason for this is that it is possible to resell non-performing loans. This means that restructuring processes are no longer subject to banking supervisory regulations. Therefore, in more and more cases, investors will have the task of initiating and maintaining restructuring processes, since merely continuing business as usual will not create any added value in the long run.

Financial and structural reorganisation
But what does restructuring actually mean in practice? Just as in the field of medicine, there are two approaches – you can combat the short-term symptoms or eliminate the causes of the illness over a long period of time. Intervention from outside is financial reorganisation. This involves contributions from creditors and equity capital providers as a means of improving balance-sheet ratios. This can include deferment of payments, forfeiture of claims by creditors, and conversion of liabilities to shares. An alternative could also be a reduction in share capital.

Completely different instruments are used in a structural reorganisation, which entails restructuring the entire enterprise internally. This means changing production and distribution processes, reorganising departments such as purchasing and operations, and reorienting the company’s strategy.

In practice, the financial aspects often have greater clout. Without any doubt, the best thing that creditors and owners can do to ease the financial situation in a crisis is to sit down at one table. However, experience shows that such measures alone are often insufficient. Many a long-established company has once more been in the headlines just a few years after a supposedly successful financial reorganisation. The decisive reason for this is that, although these companies had less debt and fresh capital, they were still working with the same structures and a strategy that was only gradually changing.

Eliminating the cause
The main goal of restructuring is to eliminate the causes of the crisis. All measures are taken to ensure that a company will once more become competitive and generate a return which is normal for the respective sector. Analysing causes is often a laborious task, since they are usually a combination of out-of-date production methods, entrenched distribution channels, a neglected control system and other factors. Only those who have the courage to leave familiar paths and reorganise structurally can get back on the road to success on a long-term basis. Without the help of external advisors, such an analysis often gets bogged down halfway to its goal. And even during the following implementation phase, it is easier for an external advisor to ease old structures away and modernise an enterprise.

Restructuring only bears fruit after some time, when new processes take effect, new products are launched and new distribution channels are well established. It is not possible to restructure an enterprise comprehensively within quarter of a year; the impact of a reorganisation based on structural criteria is only noticeable in the following quarters. The ability to implement efficiently is of crucial significance to the success of the restructuring programme.

The perfect plan
Integrated corporate planning is crucial to the success of a restructuring programme. Up until now, it has often been the case that a plan was not devised until a crisis occurred. Many companies get into dire straits as a result of planning based on nothing but their own viewpoint, without deploying modern planning and early warning systems. The consequences are fatal – they recognise earnings and liquidity risks too late, come under time pressure, and can only concentrate on financial reorganisation.

Those who are really serious about restructuring their enterprise cannot avoid looking at integrated planning. This means linking various plans for areas such as sales, investments and staff, and transferring them to an integrated earnings, assets and liquidity plan. Only when all essential reciprocal influences have been included in the plan can a reliable and objective-oriented result be achieved. The degree of detail, as well as the organisation and intensity of the plan, depends on such factors as the company’s size and complexity. What » is decisive in this respect is that the objectives are precisely defined and that a specific plan of action (that can be monitored) is devised.

Flexibility without red tape
Companies in a crisis have many options for action – this not only applies to an out-of-court turnaround, but also to insolvency proceedings under the supervision of a court.

The US has been a role model in this respect for many years. If a US company is threatened by insolvency, they can file for insolvency proceedings pursuant to Chapter 11 of the US Bankruptcy Code. The debtor is then granted protection from creditors for a limited period of time, so that restructuring measures can be implemented. A company is allowed to continue business operations during such proceedings, in accordance with US insolvency law. Moreover, as a rule, a restructuring concept is devised together with creditors and examined by the insolvency court. The management may then apply for further loans to help them to get back on their feet. New creditors have priority above all over other lenders.

England is also well known for the flexible options that the country’s insolvency law allows restructuring companies, without too much red tape. Two options from the variety of proceedings offered by English insolvency law are administration and company voluntary arrangements (CVA). A CVA is a kind of out-of-court settlement agreement between the creditors and the debtor company.

Abundant alternatives
In countries like France and Germany, governments have adapted their insolvency law to the Anglo-Saxon model and, by doing so, have given restructuring efforts a lot more weight. In Germany, the Law on Further Facilitating the Restructuring of Companies (ESUG) came into effect in March 2012. Obviously, the objective is to make it easier to turn around companies in a crisis. This can be achieved by in-court restructuring proceedings without an insolvency administrator, such as debtor-in-possession and protective shield proceedings. This means that the previous management is allowed to lead the company through the crisis itself – in each case supervised by an independent custodian and generally supported by a restructuring expert with insolvency experience.

This is a good idea in principle. However, up until now, a large number of ESUG reorganisations have failed. In reality, one in four proceedings in Germany ends in ordinary insolvency. The decisive reason for this is insufficient preparation and lack of time. Ideally, a restructuring concept will already have been devised in advance and can provide a basis for a feasible turnaround plan. Anybody who begins from scratch on the day the application is submitted has very little chance of devising a convincing plan, in view of the complexity of the proceedings. In such cases, it is often only the deployment of outside experts that can help.

The value of expertise
Business law firms are the right restructuring partners, provided they have a good feeling for business and the ability to implement efficiently. Only then is it possible to create an integrated corporate plan, a due diligence review and restructuring concepts, as well as to manage M&A processes. At the same time, law firms already know prior to insolvency what is crucial in a worst-case scenario.

About PLUTA
The company was founded in Ulm in southern Germany, more than 30 years ago. PLUTA is an expert in restructuring and turning around companies that have been affected by a crisis or insolvency. The law firm concentrates on legal advice and insolvency administration, together with consultation on and implementation of restructuring programmes. With more than 35 appointed insolvency administrators and over 330 employees in more than 40 offices in Germany, Italy, Spain and Poland, PLUTA has been one of the leading restructuring companies for many years.

The insolvency and restructuring business has become global like every other business activity. Enterprises have branches, customers or suppliers outside their own borders, so require cross-border advice. The international network BTG Global Advisory, of which PLUTA is a member, will in future increase its efforts to offer international services for cross-border restructuring. The network used to focus on insolvency administration, but nowadays important pre-insolvency restructuring has been added to the range of services.

BTG Global Advisory covers wide parts of Europe, North America and Asia. This year, newcomers to the network included GlassRatner Advisory & Capital Group in the US, as well as Rodgers Reidy with headquarters in Australia, Hong Kong, Malaysia and New Zealand. Farber Financial Group in Canada, Begbies Traynor in the UK, and Integrated Capital Services in India have all been members of the network for several years now. PLUTA supports the network from its offices in Germany, Italy, Spain and Poland.