Soviet sores: Collapse of an empire 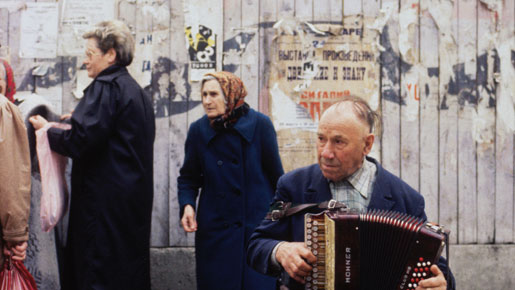 Uncomprehending groups of Muscovites stood in knots, looking up as the bright red banner came down from above Red Square and the white, blue and red-striped flag of Russia was run up in its place. Emblem of the Bolshevik revolution, the hammer and sickle had been the official symbol of Soviet-style communism since 1924.

It was Christmas day, 1991, and the body of Lenin was surely spinning in his mausoleum nearby. The lowering of the flag signified the collapse of the Soviet Union, the “evil empire” in the words of President Ronald Reagan that had embodied for the best part of the century the idealistic Marxist theory – “from each according to his ability, to each according to his need”. The Soviet Union had become the implacable foe of much of the western world while scores of nations including nearly all of Eastern Europe had congregated around it, albeit often through coercion, in what Winston Churchill was the first to describe as an “iron curtain”.

Although the collapse was sudden and – at least to some – shocking, what stunned everybody, eastern Europeans and westerners alike, were the subsequent revelations about how it all happened. The evil empire had also been the secret empire and few even within the Soviet Union knew how the world’s other superpower had unravelled seemingly in just six and a half years.

A Soviet Union specialist, professor Archie Brown of Oxford University, observed shortly afterwards: “The speed with which the Soviet system was transformed and the Soviet state disintegrated took almost everyone by surprise.”  The iron curtain had seemed “impervious to fundamental change.”

But as the facts slowly emerged, they showed that the implosion had its roots during the corrupt rule of Leonid Brezhnev between 1964 and 1982. Basically, Russia’s centrally planned economy had become hopelessly inefficient with disastrously low levels of productivity. Indeed, as economists point out, some of the remoter agrarian regions could probably have learned something from medieval farmers. And although vast amounts of capital were pumped into factories, the return on investment in economic jargon varied between poor and pitiful.

“The Soviet Union had an unusually high ratio of capital to output,” as a World Bank study explained at the time.

The five-year plans that set down formal targets for growth had become bad jokes. They were devised by desk-bound bureaucrats who issued virtual decrees about how many tonnes of nails or pairs of shoes had to be produced every year. According to scholars of the period, it was all a charade coordinated by Gosplan, the state planning committee which knew far less about what was needed than did the Soviet Union’s citizens. The result was, according to the World Bank, that on Brezhnev’s watch the Soviet Union turned into “the most under-achieving economy in the world” – and that included developing nations.
Brezhnev’s ill-conceived invasion of Afghanistan certainly didn’t help either. Although, contrary to popular opinion, it wasn’t massive over-spending on defence during the cold war that broke the back of the Soviet Union, the Afghan misadventure certainly inflicted further damage on an ailing economy as defence spending jumped to 27 percent of gross domestic product. The Kremlin poured eight times as much into the conflict as did the US in supporting the mujahideen.

After Brezhnev’s death in late 1982, Yuri Andropov, ruthless suppressor of the Czechoslovakian revolution and a former head of the KGB, took control of the Politburo. He inherited an economy in severe need of repair, but it was too late. “Because of the high oil prices of the 1970s the Soviet leadership avoided serious economic reforms, such as those that saved Deng Xiaoping’s China,” notes Greek professor Harry Papasotiriou, an authority on international relations. Oil prices were now plummeting.

Andropov also inherited a people in a state of mounting disillusionment. Brezhnev had frozen the production of ordinary consumer goods, vodka excepted, because of the arms race with America and there were widespread shortages of nearly everything, especially outside Moscow where many cities were closed to foreigners. Because most visitors stopped at Moscow, the government made sure shops were well stocked but, beyond the capital, shelves of many shops were often empty. Staples such as bread, meat and vegetables were regularly unobtainable. Power cuts were common, even in freezing winters. State services such as health were barely adequate.

Yet because a party-run media published nothing but pro-Soviet propaganda, people had no idea how badly off they were. In reality the quality of life in Asian and many sub-Saharan countries was far superior than it was in the cradle of theoretical equality.
However citizens had become restless, bitter, frustrated and defeatist. As American commentator Randy Black, a specialist on the fall of the Soviet Union, notes, many had lost faith in the communist dream. “I think a big contributor to the demise of the USSR was the lack of spirit among the proletariat that an individual could make a difference,” he writes.

In due course it also became clear the extent to which the Kremlin had turned into a dangerous and power-hungry hotbed of intrigue. Under the vengeful Andropov, terrified former Brezhnev cronies reportedly committed suicide rather than fall into the hands of the KGB. A hard-line Marxist theorist whose mantra was “the destruction of dissent in all its forms”, Andropov was “profoundly corrupt, a beast”, according to Washington Post journalist David Remnick who worked in Moscow at the time.

Ill when he took office, Andropov ran the Soviet Union from a hospital bed for the last year of his life. He was in power for just 15 months.

His successor, propaganda specialist  Konstantin Chernenko, fared even worse. Also ill at his appointment, he lasted just 13 months, from February 1984 to March 1985.

The arrival of Mikhail Gorbachev, a smiling former agricultural worker and lawyer, in the top job in 1985 seemed to offer hope with his promise of a programme of overdue reconstruction known as perestroika. Even so, there was no suggestion the Soviet Union was on the brink of collapse or anything like it. “There was no political instability within the country, no unrest, and no crisis,” notes professor Brown. Although there was certainly a sense among the leadership that things had to change, nobody predicted what was about to happen next.

To the stupefaction of western observers, Gorbachev announced elections in the summer of 1988. Not the rigged ones of earlier days but real contested elections for a new layer of government called the Congress of People’s Deputies. The elections were a key plank of Gorbachev’s policy of glasnost, meaning openness or transparency. He even dared to          mention a need for democratisation.

Horrifyingly for the old guard, outspoken critics of Communist Party leadership won a number of seats in the elections at the expense of senior party officials. A sense of liberation was afoot. Long-banned books such as George Orwell’s ‘Animal Farm’, an attack on totalititarian regimes, and Alexander Solzhenitsyn’s ‘The Gulag Archipelago’, an account of life in the prison camps, were being published. Solzhenitsyn had been expelled from the Soviet Union in 1974.

Even worse for Gorbachev’s opponents, the books were being devoured by stunned citizens. Had these things really been going on in our nation?

Gorbachev moved to abolish the old command economy by permitting private enterprises, albeit under another name. Factories no longer had to meet ill-conceived production targets. Disastrously for the reformer however, his economic reforms had the unintended effect of destabilising the economy because, pointed out economists later, there was no proper market-based system to fill the vacuum. “The communist system began to crumble,” summarises professor Brown.

However it was a complete shock to Gorbachev, westerners and the old guard alike when, from 1989, the Soviet Union also began to crumble. One nation after another exercised Gorbachev’s “right to choose” and bolted from the iron curtain while to the amazement of the west the much-feared Russian forces let it happen. Not a single shot was fired in anger as central and eastern European countries, tired of the Soviet yoke, broke away and “took their destinies into their own hands”. Soon nations in the “inner empire” such as Lithuania, Estonia and Latvia followed suit.

At this point the Stalinist rearguard in the Kremlin decided enough was enough and mounted a coup against Gorbachev in the infamous August coup of 1991 while keeping him under house arrest in the Crimea. It was only the intervention of Boris Yeltsin, a career politician whose father had done time in the gulags, which averted the coup.
A former favourite of Gorbachev, he had turned into an enemy after the head of state sacked him over accusations of meddling in political affairs by Gorbachev’s wife, Raisa. Piqued, he had run for the presidency of Russia, easily the most populous state and a power base, and won it. As the generals’ forces gathered in Red Square, Yeltsin raced to the scene, leapt on a tank and denounced the coup, which fizzled out with remarkable speed.

Fatally weakened by the coup, with his old comrade on the ascendant, Gorbachev lost all credibility. By then Yeltsin had negotiated the dissolution of the Soviet Union behind            Gorbachev’s back and, when a helpless Gorbachev stepped down on December 25, 1991, the new banner of Russia was run up in place of the hammer and sickle.

Fifteen new states now stood where one mighty superpower had recently held sway. Remarkably, as Soviet scholars repeatedly point out, it had all happened without bloodshed. “A success story,” summarises professor Brown.