Some have described Patrick Kron’s achievements at once-close-to-death French multinational Alstom as “miraculous”. Miraculous or not, Kron is lauded and praised just about wherever he goes 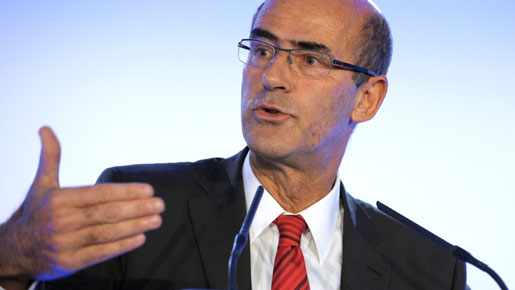 The CEO of Alstom has many achievements under his belt. But Kron is best known – and likely to be known long-term – for the complete turnaround of this once-troubled French power generation and engineering company. Actually to describe Alstom in such terms does it an injustice. Alstom is heavily into nuclear power generation, transport and a huge range of urban transport systems too. It is massive oil tanker of a company.

But though Kron succeeded in revitalising Alstom, it was never going to be a routine task for this exceptional CEO. Let’s rewind back to 2003: Alstom was then teetering on the verge of bankruptcy. Its operational performance was abysmal, its finances were in a mess and there had been the temporary collapse of its most important market, power generation. Additionally, losses were running at one point at more than €3m a day. Productivity, too, was awful.

But the then-finance minister, one Nicolas Sarkozy, managed to engineer a massive £4.4bn bail-out for the company. What is remarkable about Kron’s subsequent turnaround of the company was not that it faced several problems and this CEO solved them, but the fact that he faced these multiple challenges all at once. And of course, if you fail in one area, then that failure impacts hard on the other areas, despite any measure of improvement in one area. Hugely daunting.

Mood lifter
Kron worked internally. He went through budgets carefully. One of the biggest tasks was keeping staff moral up and convincing them that the changes would work out. Converting negativity to positivity – and finding early wins that would stimulate staff for the next tough corner. Much of it was about confidence. Client confidence too.

“Our customers came back quite quickly once they saw we had a plan that also made sense in their own minds. The banks took a little more time,” he said in an interview. It was also about being clear with the message, and making sure that different stakeholders heard a message that was tailored to their own needs. It’s that sort of attention to detail that has marked Kron out.

Leaders that Kron admires? Actually, he has very few. He’s well aware that so-called “leaders” often have a limited shelf life. Their vision or success lasts for a while before being undermined by events or their own actions. In this sense, he’s refreshingly modest.
What is key is the diagnosis of a problem and having the confidence to run with it he says. Make sure your decisions are close to where the action – or the problem – is with strong reporting and staff empowerment. “I am never impatient,” he has said, “to hear good news – good news always travels very fast – but I also like to hear bad news very quickly because this needs to be handled rapidly.”

Full steam ahead
Naturally he has a decent salary – approximately €2m – to match his achievements; even Nicolas Sarkozy does not object. “Salaries do not shock me on condition that they are associated with real risk,” says Sarkozy. “Patrick Kron, who has turned Alstom around, deserves a big salary. His predecessor did not deserve a golden parachute.” However by the standards of many other multinational CEOs, his remuneration is modest.

What then of the future and how has the global recession changed Kron and Alstom? A U-shaped recession is the reality he predicts, though how wide the trough of this ‘U’ is still anyone’s guess. But Alstom still has a big back-order book and is also cash-rich.

It’s not been plain sailing by any means. Allegations of contract bribes have arisen within the company. And it recently failed in its attempt to prevent Eurostar from running German-made trains through the Channel Tunnel due to a contract bidding squabble. More recently, Kron has been invited to consider a stake in key rival Areva, though whether Kron will participate is uncertain but Alstom doubtless will be keen to do some kind of a deal.

“The energy sector is now re-inventing itself,” Kron said in 2009. “There will be more investments in the sector in the next 25 years than there have been since the birth of electricity at the beginning of the 20th century. But the type of electricity we will have will not be the same as the one we have had in the century just gone.” In other words, synergies are vital. He is also not scared of China. In fact, he seems to embrace the challenge. Alstom, he reminds us, has been selling to China for fifty years and has a Chinese            workforce of 8,500 people.

“I have spent a great deal of time trying to rebuild trust inside the company, and to suggest future projects for the company, and in particular for each employee. I think that this aspect and the involvement of management in this matter have been crucial to our recovery,” he says. “And a while ago, some people even gave Alstom up for dead. But we never stopped fighting. Our motto could be ‘Never ever give up’.”