Some of the most informative management platforms are those most entrenched. Herzberg's motivation hygiene system still rings true 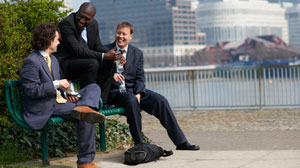 Psychologist Frederick Herzberg developed his motivation-hygiene theory, also commonly referred to as the Two Factor Theory, in 1959, by interviewing a large number of engineers and accountants in the Pittsburgh area.

The theory states that there are specific factors in the work environment that result in job satisfaction. Apart from these there are different sets of factors that cause dissatisfaction.

Fundamentals of the Two Factor Theory
According to Abraham Maslow, individuals have five essential needs, starting with basic physical at the bottom, going through security needs, social needs and self-esteem needs, until we get to self fulfilment needs at the top. His theory has been highly influential in the workplace and is still used today by managers around the world.

Where Herzberg agrees with Maslow is that he says fulfilling individuals’ basic needs for pleasant working conditions, a safe environment and a minimum salary, are not sufficient to satisfy them. They are, instead, motivated by the fulfilment of higher-level psychological needs, such as recognition, a sense of achievement, advancement and responsibility and the nature of the work they have to do.

Herzberg, however, added a second dimension to Maslow’s theory by suggesting that there are separate sets of factors that will cause workers to be dissatisfied in the workplace, even if all their other needs are met in terms of the Maslow hierarchy of needs. Some of the factors he listed are supervision problems, company policy, relationship with peers and seniors, working conditions, salary and security.

Satisfaction and dissatisfaction do not form a continuum therefore, with one decreasing as the other one increases. To improve productivity and attitudes in the workplace, managers must recognise and attend to both sets of factors and not make the false assumption that increasing satisfaction will automatically lead to a decrease in dissatisfaction.

Tesco is one company that uses elements of Herzberg’s theory to motivate its employees. The company pays attention to factors causing dissatisfaction as well as those causing satisfaction.

As an example, employees are motivated and empowered by timely and appropriate communication, by involving personnel in decision-making and by delegating wherever possible. Forums are held every year in which staff can provide input on pay rises. Tesco personnel even get an opportunity to give their input when restaurant menus are designed, helping to prevent feelings of alienation and dissatisfaction.

In a 2009 study at the University of Malaysia and the University Tunku Abdul Rahman, also in Malaysia, it was found that the major factors determining job satisfaction for staff members were salary, policy and administration. The main factors that caused job dissatisfaction were lack of personal growth and personal achievement.