Scotland’s credit rating up for debate

As Scotland considers independence from the UK, credit rating agencies have pointed out that a triple A rating is not guaranteed 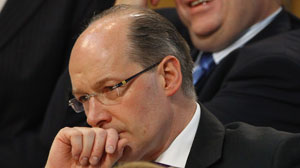 When John Swinney, Scotland’s Finance Secretary, spoke to The Scotsman on February 2, he was upbeat about the prospects for an independent Scotland.

“My vision of an independent Scottish economy is one in which monetary policy acts to underpin price and macroeconomic stability, supported by fiscal and economic flexibility to promote growth and create jobs.”

Swinney added that in a world that was becoming increasingly interconnected, independence would give Scotland the opportunity to “put forward a distinct voice” in the world of international business. It would allow the country to make the best use of the available opportunities for both its people and its businesses.

As far as an independent Scotland’s credit rating is concerned, Swinney is equally upbeat.  He expressed confidence that the country would retain the UK’s coveted AAA credit rating, because “it was difficult to deny the effectiveness and strength of the economy.”

When journalists asked him if he had discussed this with the credit agencies yet, he replied that the Scottish government “have not had a draft opinion” so far.

His optimism is not completely unfounded. The latest export and labour market statistics, along with the output figures for Q3, were published in mid-January. These showed that Scotland’s GDP grew by 0.5 percent during the third quarter. This is the same as the figure reported for the UK as a whole, showing an upturn in manufacturing and services.

It’s not quite so rosy. The unemployment figure of 8.6 percent is still marginally higher than that of the UK as a whole – which is the highest it has been since 1994.

Soon after, the three most important credit rating agencies warned that it was not a given that an independent Scotland would inherit a AAA rating.

If Scotland should decide to break away from the UK after the 2014 referendum, these agencies warned, the country cannot simply count on receiving the same credit rating as the UK.  This would, of course, lead to higher borrowing costs for the fledgling country.

Moody’s, Standard and Poor, and Fitch – do not issue public comments about unrated economies, and the Scottish government has so far not sought a draft opinion. However, at least one credit rating agency has told the Financial Times that an independent Scotland would most likely receive a rating a few notches below AAA.

This is not unusual for a small country, especially one that has been established recently.

A lower credit rating is an indication that credit agencies attach a higher element of risk to bonds issued by the country – which in turn normally leads to higher interest rates for the country in question.

This, in turn, will cause internal interest rates to rise, meaning both businesses and domestic households have to pay higher interest rates on their loans – which could negatively affect economic activity in a country.