As European companies seek to capitalise on the US' trade war with China, showing an awareness of cultural differences will be key to establishing productive business relationships 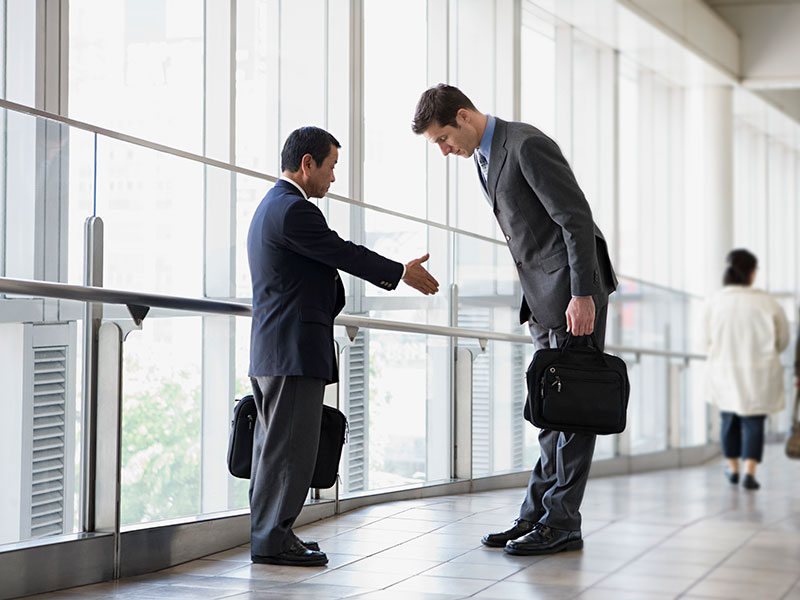 Shaking hands has become increasingly common practice in Asia. You can also nod at the same time or do a small bow after, but start with a handshake
Management

We live in unpredictable times. Not only did US President Donald Trump withdraw from the Trans-Pacific Partnership – the putative trade agreement between the US and 11 other countries including Japan, Vietnam and Singapore – he has also embarked on a much publicised trade war with China, threatening to apply tariffs to all $505bn (€431.5bn) of Chinese goods imported into the US.

However, while the US favours a protectionist stance, other countries – notably those in the EU – are hoping to increase their trade with Asian partners. In fact, the EU’s total trade with Asia is worth no less than €1.4trn a year.

As European companies seek to build relationships in Asian markets, understanding the various cultures, etiquettes and nuances of language will be critical to success. Here, we outline five top tips for conducting business in Asia:

Make formal introductions
There are some broad rules to consider when addressing someone in Asia, especially for the first time. First, it’s important to always use the individual’s formal title – e.g. “Director” or “Mayor” – rather than a general “Mr” or “Mrs” salutation.

This degree of formality should be maintained until you’re invited to address someone more informally – you should never make this decision yourself. Should you be introduced to a group (or need to introduce members of your own team), always do so in a line, starting with the most senior person.

In Japan, instead of adding a title of civility to the beginning of a name, you should attach “-san” to the end of it. This appendix is gender neutral and works independently of whether the person in question is single or married. The rules of address are specific to each country, so take advice from an expert or someone native to the area.

Adhere to local business etiquette
Let’s begin by addressing the traditional confusion about whether to bow or offer a hand to shake. Shaking hands has become increasingly common practice, so we advise starting there, though you can also nod at the same time or do a small bow after your handshake. However, be careful when bowing (particularly in Japan) if you have not been taught how to do it properly.

According to the context, you may find yourself being welcomed by a group with applause. It’s polite to smile and applaud in return.

When it comes to business cards, never put a pile on the table and invite people to take one. You should also refrain from sliding them across the table as if they were playing cards, writing on someone else’s business card in their presence or placing a card you have just received into your back trouser pocket.

Most commonly, you will take your counterpart’s card with both hands and thank them, before placing it in a cardholder or next to you on the table. You should hand over your business card in return, also giving it out with both hands.

Master your body language
In most Asian countries you’ll need to take facial expressions and body language into account to get the true meaning of what’s being communicated; the nuances of body language are far more important to grasp in Asia than in most others regions. For example, talking with your hands in your pockets should never be done. Passing anything with your left hand is also considered rude in many countries – no matter whether you are right or left handed.

Further, there are several important rules – or simply ways to be polite – based on religious customs and beliefs. A Buddhist, for example, may be offended by the way your feet are positioned, particularly if you show them the soles of your shoes, as they are the lowest part of the body and considered offensive. Conversely, your head is the highest part of your body and considered sacred. Touching someone’s head is viewed as being very invasive and should be avoided.

Broadly put, if you don’t know enough about how body language is used in the culture in which you’re doing business, try to avoid making too many gestures or too much physical contact.

Establish connections
This is perhaps one of the most important tips for doing business in Asia. If you want to succeed, you need to know the place and, more importantly, the people with whom you wish to make a deal.

You’ll want to spend as much time as possible in the area to familiarise yourself with it and show your interest. The importance of building relationships and connections cannot be overstated. This is true of everything from the higher business-to-business level right down to individual interactions between employees in the workplace.

In countries such as Malaysia, the amount of time employees spend relationship building and socialising has been estimated at around 50 percent of their workday. This, more than anything else, should give you an inkling as to the value placed on making connections.

Keep learning
Most western businesses will tend to approach Asia as if it was one country. But, in reality, the region is incredibly diverse in people and culture. You need to be aware of those differences to be successful in each country.

Always maintain a sense of curiosity and be open to learning from different problem-solving and decision-making processes, instead of simply imposing your own approach. This will not only benefit your business, but it will also engender trust and respect with your business partner.

In today’s global market, businesses have to stop thinking about the risks of doing business in Asia and start thinking about the risks of not doing business in Asia. As cultural knowledge stems from experience, there’s no substitute for expert local advice. Surround yourself with insiders who have deep experience in your target markets, who can help you navigate the landscape and who can stop you from making preventable mistakes.