Málaga is the perfect destination for business and leisure

Málaga is best known as a Spanish port and transportation hub for the Costa del Sol. But the city has also embraced digital technologies in a big way, and today boasts a thriving business community 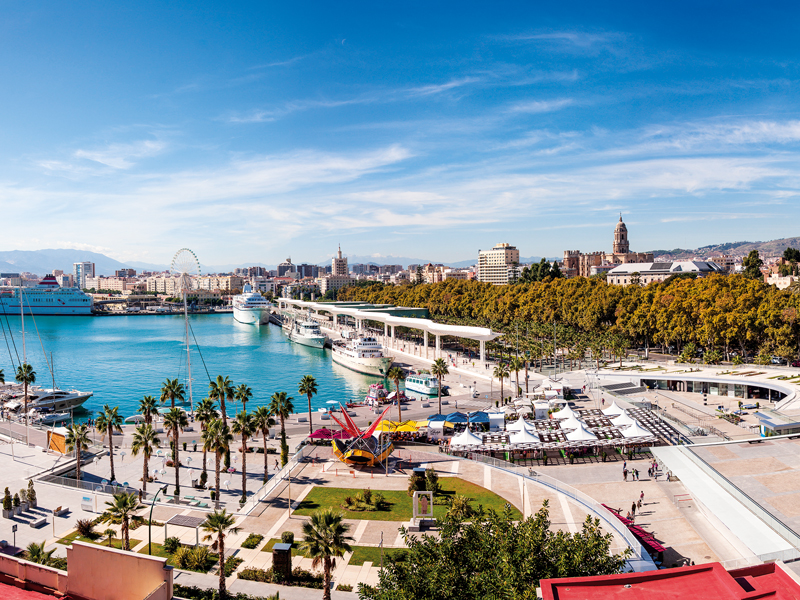 With a population of 570,000 inhabitants, Málaga is a cosmopolitan Mediterranean city where residents of more than 150 nationalities live and work together
Featured

Low operating costs combined with an attractive quality of life make Málaga one of the best places to live, work and invest in the world. As the gateway to the Costa del Sol and Andalusia, Málaga has a state-of-the-art international airport with direct flights to 142 destinations in 31 different countries and receives more than 19 million passengers annually.

Standing out among several economic highlights is the Andalusia Technological Park (PTA), located to the west of Málaga’s city centre, which is home to 646 companies and 19,873 workers. Software development, wireless solutions, telecommunications, big data analytics, radio frequency identification, aeronautics, biotechnology and renewable energies are some of the sectors represented by companies at the park.

One thing that all industries can benefit from is Málaga’s wonderful climate, attractive landscapes and hospitable people. With a population of 570,000 inhabitants – making it the sixth-largest city in Spain – Málaga is a cosmopolitan Mediterranean city where residents of more than 150 nationalities live and work together.

As a business location, Málaga can add tremendous value to a company by lowering overall operating costs while rewarding employees with a very high quality of life

Game on
Smart cities like Málaga use technology and innovation to more efficiently provide services to citizens and visitors. The Internet of Things, cloud computing and artificial intelligence are disrupting traditional business models in almost every smart city, and Málaga is no exception. In particular, the city has been quick to use its hi-tech credentials to tap into the burgeoning e-sports market.

For many years, Málaga has hosted animation and gaming companies in the PTA; in 2012, the Gamepolis festival was launched in the city, which today is one of the largest and oldest video game conferences in Europe. Earlier this year, la Fábrica del Videojuego, which translates to the Video Game Factory, opened in Málaga. This pioneering learning centre is an ideal environment to foster creativity and promote future developers in the video game industry. It offers training courses, mentoring and support, and also organises tournaments. The city of Málaga is proud to support the video game and e-sports industries. More people are gaming today than ever before. The variety of games has expanded as well, with app stores now full of thousands of options. Companies working in the virtual reality and 3D animation sectors have benefitted tremendously from this boom in video games. In addition to the e-sports market, other industries such as tourism, real estate, medicine and manufacturing are using virtual reality and 3D animation to improve their businesses. These industries and many others will receive a warm welcome upon establishing themselves in Málaga.

Working well
Globalisation has meant increased interaction between people, companies, organisations and governments from different countries. At the same time, digital nomads are redefining the way people work. Málaga is ready to take advantage of these developments.

Málaga has already transformed into an innovative smart city and aims to continue evolving. The city has outlined its plans for the future in its Strategic Technology Innovation Plan 2018-2022. In addition to the 198 smart city initiatives defined in the plan, Málaga has built an urban laboratory within a municipal building. The laboratory includes specialised equipment and a coworking space where companies can operate alongside the city’s engineers to test, certify and demonstrate new services and technologies within our smart city concept.

Málaga has launched a smart cities accelerator sponsored by Spain’s largest communications provider, Telefónica. It is also home to Spain’s first Digital Content Hub, which is equipped with the latest developments in videography, 3D animation and virtual reality. It contains recording studios, an e-sports stadium, business accelerators and coworking spaces.

Málaga is well prepared to face the challenges of the future. As a business location, the city can add tremendous value to a company by lowering overall operating costs while rewarding employees with a very high quality of life. The coming years look bright for Málaga, and not just because the sun is always shining.