Cheesed off: how US tariffs are harming the EU dairy market

The European cheese industry is reeling from the latest round of US tariffs. With retaliation a real possibility, fears of an escalating trade war between the US and EU are mounting 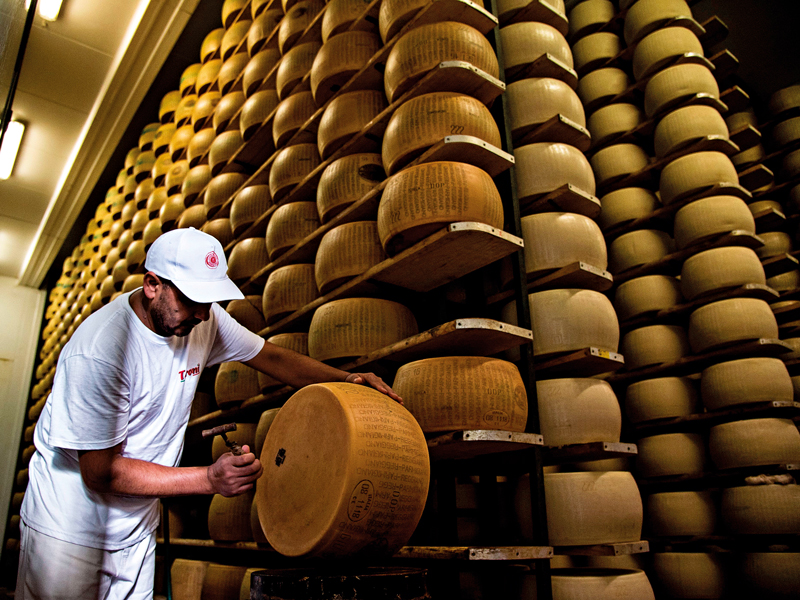 Among the loudest protestors of the US' tariff was the Parmigiano-Reggiano Cheese Consortium, which oversees production of one of Italy’s most famous cheeses, Parmesan
Industry Outlook

Since assuming office in January 2017, US President Donald Trump’s gung-ho approach to tariffs has caused headaches for finance ministers, foreign institutions and US businesses alike. It’s perhaps unsurprising, then, that Trump’s trade dispute with Europe is escalating: in October, a new round of US tariffs were brought into effect, impacting at least $1.8bn (€1.6bn) worth of European exports.

The move came after the World Trade Organisation (WTO) ruled that the EU had illegally subsidised aerospace giant Airbus and permitted US tariffs on exports from Europe worth up to $7.5bn (€6.8bn) per annum – the largest trade retaliation a WTO arbitrator has ever approved. With the US seeking to slash its $15.3bn (€13.8bn) trade deficit with the bloc, Trump needed no further encouragement to sanction a 10 percent duty on large civil aircraft and, to the dismay of agricultural businesses across the EU, a 25 percent tariff on Europe’s food and drink industry.

With the US and EU economies closely integrated, a tit-for-tat trade dispute between the two would only add strain to an already faltering global economy

The US Trade Representative’s office has said it will “continually re-evaluate these tariffs based on… discussions with the EU”, but with the US being the EU’s biggest export market for consumable goods, the short-term implications for European producers and their countries of origin could be devastating.

A grating decision
Trump’s latest round of tariffs, which target a range of specific agricultural goods, from Italian liqueurs to Spanish olive oil, will affect some EU countries more than others. For example, while Scotch and Irish whisky will be hit, French whisky will not.

One sector that is likely to feel the impact across the bloc, though, is the cheese industry. Beloved cheeses such as Italian Pecorino Romano, French Roquefort and Dutch Gouda all featured on a preliminary list of new tariffs. These items will now be more expensive for Americans to buy, making it harder for European food companies to compete internationally.

Needless to say, news of the decision provoked an outcry from Europe’s cheese producers, many of whom had lobbied to be exempted from the tariffs – to no avail. Among the loudest protestors was the Parmigiano-Reggiano Cheese Consortium, which oversees production of one of Italy’s most famous cheeses, Parmesan.

According to the consortium’s president, Nicola Bertinelli, the US is the second-biggest importer of Parmesan, receiving around 10,000 tons of the iconic cheese every year. With the introduction of new duties, however, Bertinelli fears that US consumers will now be put off the cheese by a surge in price. “The Trump administration tariff is, in fact, an affront to American consumers, who now have to pay more for the privilege of authentic Parmigiano-Reggiano,” she told Forbes.

Due to this price hike, cheese industry experts expect consumption of Parmesan in the US to decline by 80 to 90 percent. Of course, such a fall is likely to have significant knock-on effects for the industry as a whole: one of its biggest concerns is that the move could lead to a surplus of cheese flooding the European market, causing prices to drop dramatically and threatening 20,000 jobs.

You Gouda Brie kidding
To make matters worse, many of the cheeses facing duties have ‘protected name status’, meaning they must follow certain production methods and originate in specific locations to be sold under that name. As a result, they can fetch greater sums at market; with those prices being pushed even higher for US customers, though, Europe’s cheese producers fear the tariffs could give a boost to American copycat cheeses.

“The duties are nothing but a spite on behalf of President Trump because of the EU protection of the registered Protected Designation of Origin against generic Parmesan, Asiago, Gorgonzola and Fontina made in the US,” Bertinelli said. “We must defend our products as an expression of the territory and culture of our country.”

Others are less concerned. Lucia Tajoli, a professor of economics at the Polytechnic University of Milan, thinks the primary consumers of European cheese in the US will be largely undaunted by the price hike: “If we talk about French and Italian wine, liqueurs and cheese, my feeling is that they tend to be perceived by US consumers as luxury goods. They are not the daily purchases of the average consumer. So, I honestly don’t know how effective an increase in their price will be in lowering the amount of exports.” When Trump placed tariffs on steel and aluminium last year, he did so largely to push buyers towards domestic alternatives. These latest tariffs, though, are likely motivated by something else entirely.

There is a reason why cheese is deemed an “offensive” product in the jargon of the EU: many of the products affected by the tariffs (including cheese, wine and whisky) are deeply embedded in the culture of their country of origin. Placing tariffs on such goods is often meant as an act of political aggravation. Europe made a similar move last year, when it responded to Trump’s steel and aluminium tariffs by targeting Kentucky bourbon and Harley-Davidson motorcycles.

On mature reflection
With that said, the economic rationale behind the decision is hard to follow. Like many others in Italy, Bertinelli feels that the country is being unfairly targeted and made to “foot a bill” it isn’t responsible for. While Italy is home to some of Airbus’ suppliers, it is not part of the Airbus consortium, which has major offices in France, Germany, Spain and the UK. Arguably, it shouldn’t be implicated in these tariffs at all.

Also, while dairy producers in the US are likely to be celebrating, the move will negatively affect the country’s food importers, which are usually small, family-owned businesses. According to Reuters, EU cheeses generate approximately $3.5bn (€3.2bn) in revenue for US companies, and more than 20,000 retail stores sell these goods. Ultimately, it could be importers who suffer the most. “In general, tariffs mostly harm the country that is imposing them,” Tajoli told European CEO.

Many of the cheeses facing duties have ‘protected name status’, meaning they must follow certain production methods and originate in specific locations to be sold under that name

While the WTO can determine the total value of exports that will be hit by the tariffs, it can’t decide which sectors will be affected. That is up to the nation imposing them. The important question, then, is why the Trump administration decided to target the food and drink industry. Tajoli believes the US may have targeted exports like wine and cheese in an effort to hit France the hardest. After all, Airbus’ production is largely based in Toulouse.

Others fear these tariffs could just be the beginning. The EU cannot retaliate directly to the duties allowed by the WTO, but it could impose sanctions if the US is found to have illegally subsidised Boeing – a case the WTO is expected to rule on in 2020. This outcome looks increasingly likely. “From the very beginning, we have made very clear that we wanted to avoid a trade war between the EU and US on this Boeing-Airbus case,” French Finance Minister Bruno Le Maire told Politico on the sidelines of the annual World Bank and International Monetary Fund meetings in Washington DC. “The response from the US administration has been a closed door.”

With the US and EU economies closely integrated, a tit-for-tat trade dispute between the two would only add strain to an already faltering global economy. Looking forward, if the US chooses to impose duties on European cars – a major economic blow that Trump has long been threatening to deliver – then relations could sour further. It is in the interest of leaders on both sides of the Atlantic to prevent this from happening, as an escalated dispute between Washington and Brussels could rival – or even exceed – the impact of the ongoing US-China trade war.