10 worldwide running events for the ultra-competititve

Avid runners are always looking towards the next challenge: a longer distance, tougher terrain or a new personal best. These 10 worldwide running events are guaranteed to push even the most accomplished runners to the limit 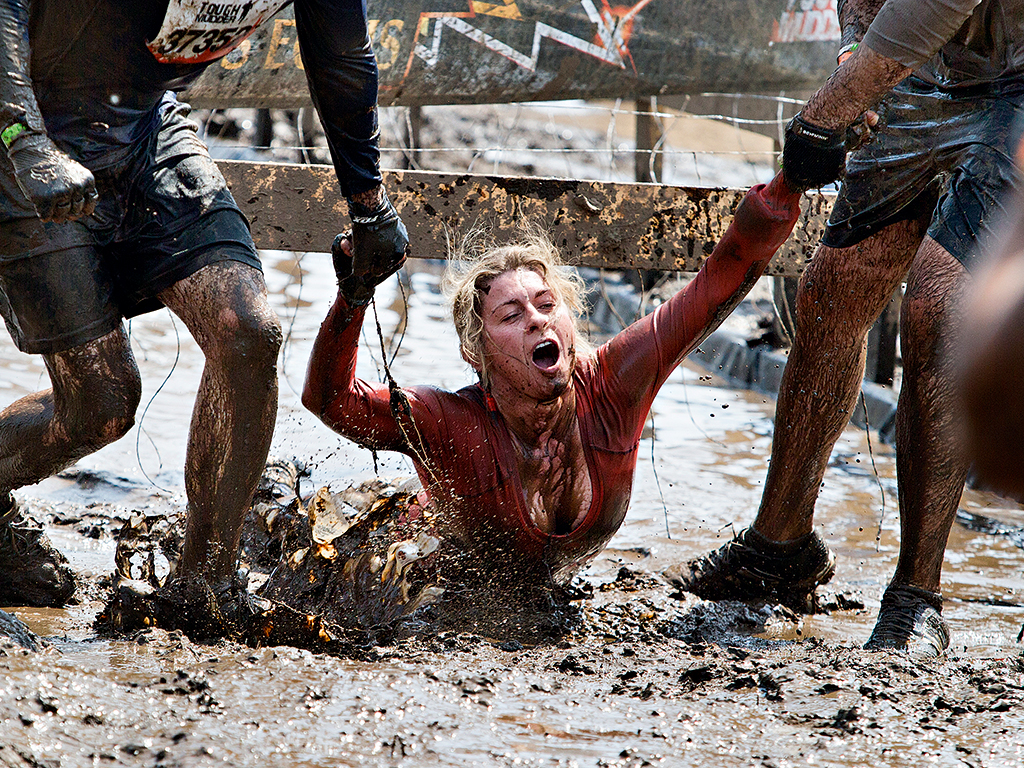 A participant at Tough Mudder, which has been deemed 'the toughest [sporting] event on the planet'
Lifestyle

Fed up with the office routine? Or perhaps you’ve already done a few marathons and want to test mind and body with something a little different. Well, a lot different. Below is a sample of some of the world’s most inspiring, gruelling and even dangerous runs. Finishers often say, “it changed my life”, and some of these terrible 10 – ranked tough, brutal or superhuman according to the mental and physical challenge – may change yours. The longest event in our list – and strictly speaking not a race – is the ‘Tour of the Giants’, which covers 330km of mountainous terrain in Italy’s Aosta Valley. The ascents are tough – there are 25 mountain passes over 2,000m – and the descents can be dangerous. And we’re not just saying that. A Chinese competitor died last year when he fell and hit his head against a rock. Competitors have just 150 hours to get back to the starting point at Courmayeur, including a few hours of snatched sleep here and there. All finishers receive a prize, and so winning is purely for honour, but the terrain is so tough that a lot of starters don’t make it to the end. Haven’t got 150 hours to spare? This race could change your life in the time it takes to down a cup of coffee – the fastest man to complete the race takes a tick over five minutes and the fastest women just under six minutes. The only catch is the average gradient is about 45 percent. The Red Bull 400 is exactly that, with the added bonus that it happens to be up a 400m ski jump in Slovenia. Think of the average staircase, which is angled at about 24 degrees. Then cover it in slippery grass – in fact, it forces some competitors onto all fours. Add in much heavy breathing and you have one of the toughest vertical races around. If Pheidippides, the legendary Athenian messenger, could do it some 2,500 years ago, then why can’t you? In 1982 Britain’s John Foden, an RAF wing commander, set out with some fellow wingmen to see if it really was possible to cover nearly 250km in one and a half days – the distance that Pheidippides supposedly ran between Athens and Sparta to summon reinforcements against the Persians. And it was – the fastest of the airmen got home in 34 hours 30 seconds. Having proved it wasn’t just a legend, the men who followed in his footsteps promptly organised the Sparthathlon, a true ultra event. Classified as an ultra-distance foot race, it takes place every year. Billed as “probably the toughest event on the planet”, Tough Mudder is a 10-12 mile military style obstacle course devised by those maestros of pain, the British Special Forces. Imagine combat without the fire power – Arctic Enema, Electroshock Therapy, Everest, Funky Monkey and Walk the Plank are just some of the exquisite tortures lying in wait, and, as the name suggests, there’s a lot of mud. One of the big attractions of Tough Mudder is that they are set on varying terrains – mountains, woodland, in fact anything tough with appropriate obstacles to match. And if 10-12 miles isn’t Tough Mudder enough, you can always front up for the World’s Toughest Mudder, the 24-hour event held near Las Vegas and won most recently by Canadian Ryan Atkin, who covered 100 miles in the allotted time. Can you get up and down the highest mountains in Britain in less than 24 hours? Roughly the distance of a marathon, the event takes competitors up (and down) 1085m Snowdon, 978m Scafell Peak and 1343m Ben Nevis. According to the organisers, this feat “is achievable by any reasonably fit person”. But it all depends which option you take, of which there are three: the 24-hour challenge includingtravel, the 24-hour challenge excludingtravel and – the more leisurely option – three days for all peaks. For guidance, the average times are four hours each for Snowdon and Scafell, and six hours for Ben Nevis. There’s ultra-distance races and there’s extreme ultra-distance races – and the Jungle Ultra in Peru definitely fits into the latter category. Carrying their own hammock, sleeping bag, medical kit, food and supplies for the entire race, competitors toil their way through 230km of the Amazon rainforest over five stages, with no rest days. They jog, walk and stumble along jungle trails, mountain roads and village tracks, often through torrential rain or electric storms and always through steaming heat. They climb as high as 10,500ft. They cross scores of rivers. Not forgetting the wildlife – vicious ants will actually jump onto competitors and jaguars lurk in the bush. Competitors have just six days from start to finish including a cruel 92km on the last day – which accounts for the most drop-outs. As one finisher said: “Compared with this race, the Marathon des Sables is like going to the beach and having a beer.” The organisers, who describe it as “the toughest footrace on earth”, would beg to differ that their event is like having a cold one on the sand [see Jungle Ultra]. In six days competitors (and there’s a big waiting list), cover 254km of Morocco’s Sahara desert with one ultra-long day of around 80km. Quoting German poet Goethe, the website exhorts prospective entrants thus: “Whatever you can do or dream you can, begin it.” Like the Jungle Ultra, it’s an eco-event. You bring everything with you and you take everything out. Uniquely, the organisers keep the precise route and distances of each event secret until just before the start. This year’s winner, from Morocco, scampered over the dunes in a few minutes shy of 20.5 hours while the fastest women, an American, finished in just over 29 hours. The youngest competitor so far was 16 and the oldest 78.  Be warned: the blisters can be as big as the dunes. From the starting point in the lobby, it’s 86 floors to the top of New York City’s emblematic building. By the time competitors make it, their legs are rubbery from climbing 1,576 steps in what the New York Post cheerfully describes as a “gut-busting, lung-searing workout”. Highly addictive, the run-up keeps bringing people back year after year, like 48 year-old Stephen Marsalese from New York State who has completed 19 of them. His advice: “Go out hard and hang on.” Fields are limited to around 400. And, oh yes, it’s no disgrace to use the handrails. Denmark’s Henrik Brandt knows China’s monumental fortifications better than just about anyone except the people who continually repair it. He’s the only runner to complete all 14 editions of one of the world’s most unusual marathons. Forget about your usual marathon times – the course over the Yellow Cliff Pass, to give this section of the wall its local name, involves 5,164 stone steps, precipitous descents and steep ascents that reduce competitors to their hands and knees.  They say finishers can hardly walk properly for days. Yet the appeal of this race keeps growing – 2,500 starters from 50 nations turned up in 2013. If 5,164 feels like a few steps too far, you can always opt for a half marathon or the 8.5km ‘fun’ run. The male winner of the 2013 version of this Antarctic marathon prepared in a freezer with the temperature set to -22C, and for good reason. The race takes place at 80 degrees south, not too far from the South Pole, where the average wind chill temperature plummets to around -20C. Nobody enters this race lightly – a total of 52 men and women fronted up in 2013 – if only because of the all-inclusive €10,800 entry fee.