The flight of fashion

Larusmiani has seen many changes. What has remained constant are the values of exclusivity, luxury and quality 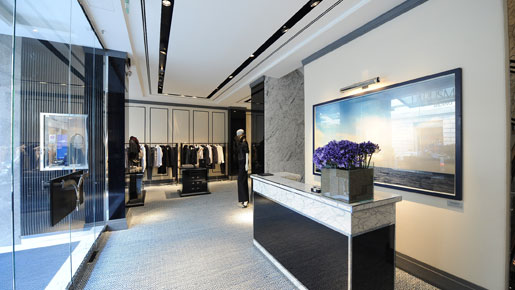 Devoid of many of the pretensions so frequently associated with the super luxe Italian fashion brands and houses, Larusmiani stands apart from its competitors not in terms of luxury, but through the discreet elegance and supreme quality for which the label has become renowned. Opening a small atelier in 1922 on Via Manzoni in Milan, Guglielmo Miani founded the company with the original name of Larus. Meaning seagull in latin, this became his unmistakable logo and was sewn inside all of his bespoke pieces.

Starting out with made-to-measure raincoats, Miani branched into tailoring and           success quickly followed. Larus became the pinnacle of luxury Milanese menswear counting both Charlie Chaplin and Buster Keaton as fans and clients. Between 1939 and 1958 the company opened five boutiques in Milan’s fashion district including the flagship on Via MonteNapoleone which still exists today.

Alongside the store, Miani began to develop a textiles branch of the company and was the first person to import vicuna to Italy from the UK. A relative of the llama, vicunas produce an extremely costly and rare fabric because they can only be shorn every three years.

Knitted together, the product of their fur is soft and very warm – perfect for elegantly tailored suiting. A great success, Miani went on to develop strong links with the UK and Larus became one of the largest importers of their fabrics to Italy throughout the 1940s, 50s and 60s. This resulted in Miani receiving an OBE from the Queen of England in 1970 and the company continued to prosper.

In 1970 Miani’s son Riccardo became CEO and added the family’s surname to the brand name – thus creating Larusmiani. He could see that the market was changing and responded by taking the company in a new direction and began to manufacture fabrics.  Whilst still continuing to produce tailored menswear in the boutiques, this new arm of the business became extremely profitable and the main focus for the brand. Today Larusmiani exports over two million metres of textiles per year around the world, with cotton and linen mixed with cashmere, silk and vicuna the most popular.

It’s clear that Larusmiani’s success, and Larus’ previous to that, has been driven by its ability to adapt to market need and expand into new fields. Still run by the original family, the current CEO is Guglielmo Miani – grandson and namesake of the original founder.
Educated in both Italy and the US, Miani worked in banking and textile chemistry before joining Larusmiani in 2000.  Less than a decade later he took the helm of his family company and today runs the head office in Milan overseeing both textile production and export along with directing the Larusmiani label and store.

The brand has always been about luxury and quality, with a classic and timeless style and Miani is very aware of the importance of the brand’s heritage. With this in mind, he comments that Larusmiani ‘focuses on traditional values such as artisanal marksmanship and truly handmade clothes’ and he is keen to point out that ‘Larusmiani has what now is considered very rare in Italy – a tailor shop with over 40 tailors in Tuscany that sew every Larusmiani piece by hand.’

One of Miani’s undoubted legacies to the brand will be his complete and awesome refurbishment of the flagship store. Right in the heart of Milan, and in terms of sales per square metre one of the most lucrative shopping streets in the world, Via MonteNapoleone is home to every iconic designer label. With the enviable location of the corner between Via MonteNapoleone and Via Verri, the impossibly chic new Larusmiani boutique occupies 700 square metres over three floors.

Having read about the work of world renowned interior design and architecture practice David Collins Studio in the style pages of the Financial Times, Miani set about employing Collins to give his signature luxury residential feel to the store. Collins – whose past work includes many high profile bars, restaurants and hotels across the globe such as the Wolseley, the Blue Bar at the Berkeley and Locanda Locatelli in London – has certainly exceeded expectation.

Taking inspiration from the brand’s vast heritage and the original 1950s building,          Collins has incorporated signature luxury Larusmiani fabrics throughout in order to create a sumptuous yet timeless feel and he comments that ‘the space is a reflection of the quality and attention to detail that is the hallmark of Larusmiani’. Fitting rooms designed to be like small sitting rooms (some complete with private bathroom), a lift lined in velvet and a working stand alone watch vault are just some of the little touches that make this project truly unique and noteworthy.

At the same time as instructing Collins to refurb the boutique, Miani hired Liborio Capizzi – ex-Creative Director at Gianfranco Ferre – and gave him the task of designing the brand’s first womenswear collection. Timeless and classic, the womenswear is all crafted from the same supremely luxe fabrics as the menswear and is heavily influenced by the immaculate and signature tailoring of Larusmiani. In addition to stocking both of the clothing  collections, the store has also started to showcase a selection of rare and very high end collectors watches and vintage manuscripts. These carefully selected pieces perfectly compliment the brand and effortlessly add yet another element of desirability to the boutique.

Miani is clearly passionate about the brand and he has obviously devoted an enormous amount of his attention to the newly reopened store. So what’s next? Miani has lots planned for 2011 and although he is keeping fairly quiet, he comments that: “It will be an exciting year, with the opening of a highly selected wholesale distribution worldwide. We will see the first Larusmiani collection sold outside of Italy starting at the end of 2011 – a first for the brand in its ninety years.” Larusmiani’s ability to constantly reinvent itself has been to date one of its key strengths and will no doubt ensure many more profitable years to come.