The original and worshipped Ivy Bible 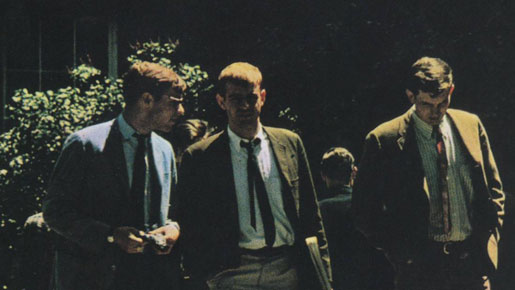 Today, “style bible” is a term that is used very lightly and is used to describe anything from large circulation fashion magazines to wardrobe-fixing guidebooks. But back in 1965 Japanese photographer Teruyoshi Hayashida and his colleagues Shosuke Ishizu, Toshiyuki Kurosu and Hajime Hasegawa published a book that revolutionised Japanese fashion forever. Take Ivy brought the American Ivy League, or ëTradí look to Japan, launching the Ivy inspired fashion trend.

For Japanese teens in Tokyoís fashionable Ginza shopping district, the fashion was a revelation; until this point, young peopleís clothing was confined to stiff, bland and restrictive school uniforms, which stifled originality. The Ivy look allowed groups of young Japanese men such as the Miyuke-zoku to express individuality outside of school. Changing into their Americanised clothing in cramped cafÈ bathrooms, the Trad fashion was a symbol of both teenage rebellion and the increasing post-war affluence amongst the Japanese middle classes.

Through his lens, T. Hayashida captured quintessential 1960s Americana in the form of young menís fashion on the campuses of the eight Ivy League Colleges. The look was relaxed but stylish ñ key pieces were madras Bermuda shorts, oxford-cloth shirt, chinos, jackets and jerseys in College colours emblazoned with the studentís expected year of graduation, college scarves and anoraks for wet weather. To top off the look, the 1960s Ivy Leaguer was clean-shaven and well groomed, with neatly cut and styled hair. Mr Hayashida captured them in all locations ñ strutting confidently through campus, in the canteen, in lectures, playing sports and in town.

The book, described by the New York Times as ìa treasure of fashion insidersî has been sought after by Trad devotees ever since it was first published, with original copies fetching over $2,000 at auction. So what makes this book so special that people are willing to spend that much money? The truth is, it has become more than just a fashion photo book ñ itís a time capsule. Within a few years Ivy League colleges would become co-educational, fashions would change radically and students would become a political movement. While the authors of Take Ivy could not have known this at the time, their book captured the end of an era ñ one that can never be resurrected.

In September, authors Mr Ishizu and Mr Hasegara spoke to blogger Tintin of The Trad about the development of the book. Colleagues at VAN Jacket clothing company, along with Mr Kurosu said the main reason for its development was to drive demand for their brand. As well as being a clothing company, VAN Jacket took influence from and introduced the whole of American culture to young Japanese, including food, sport, music and leisure activities. It’s a strategy that worked and worked extraordinarily well; Ivy League fashion exploded from a minor but growing trend into an absolute craze.

While the desire for Ivy League fashion as such has calmed since Take Ivy was published, it is still with us. The somewhat more colourful preppy look of tailored blazers and jackets, trousers, turned up jeans and the ever-present loafers is more popular than ever, not just in Japan but worldwide. It is now open to women as well, with tailored capri pants, dresses or skirts finishing off their look.

Given all of this, it is perhaps no surprise that the book was re-printed on August 31, this year and available to purchase from mid-October. But this is no ordinary re-release; for the first time in 45 years fashion followers, lovers of Ivy League style, collectors of Americana and those who are simply intrigued can own a copy of this influential tome translated into English. What does this offer the English-speaking reader that wasnít available to them before? While the photographs are undeniably what make the book so special, there is increased interest in the text as well. Many blogs and newspapers have remarked on the anthropological tone of the accompanying captions – The Telegraph described it as ìdetached, yet fascinatedî. The book records every minute detail of how the Ivy Leaguers dressed: “Some chose not to tuck in their shirts, leaving them out over their trousers. Some cut off the hems of their trousers and wore them as cut-off shorts, some put on shoes without socks” and the list goes on.î It is quotes like this that are part of the books charm and unique nature ñ something that all reviewers agree on.

Will this new edition of this classic book launch the same fashion revolution as it did in the 60s? Only time will tell, but the seeds are already there amongst current trends. What cannot be denied though is how influential it was at the time and how precious it is now. The pictures are as beautiful and as intriguing as ever; even though those buying the book will certainly be familiar with America and even with the colleges, there is a sense of looking at the subjects through a lens ñ as L.P. Hartley wrote, “the past is a foreign country, they do things differently there.”

In many ways the way of life chronicled in Take Ivy is as foreign to us now as it was to the Japanese students of 1965. Yet it is equally exciting, to which its never waning popularity is testament. What is this book? A slice of classic Americana? A descriptive photo book? A work of anthropology? A style bible? The truth is that it was and still is all of these, which is what has made it so special and established its cult status. Take Ivy is published by powerHouse and is available for £17.99.