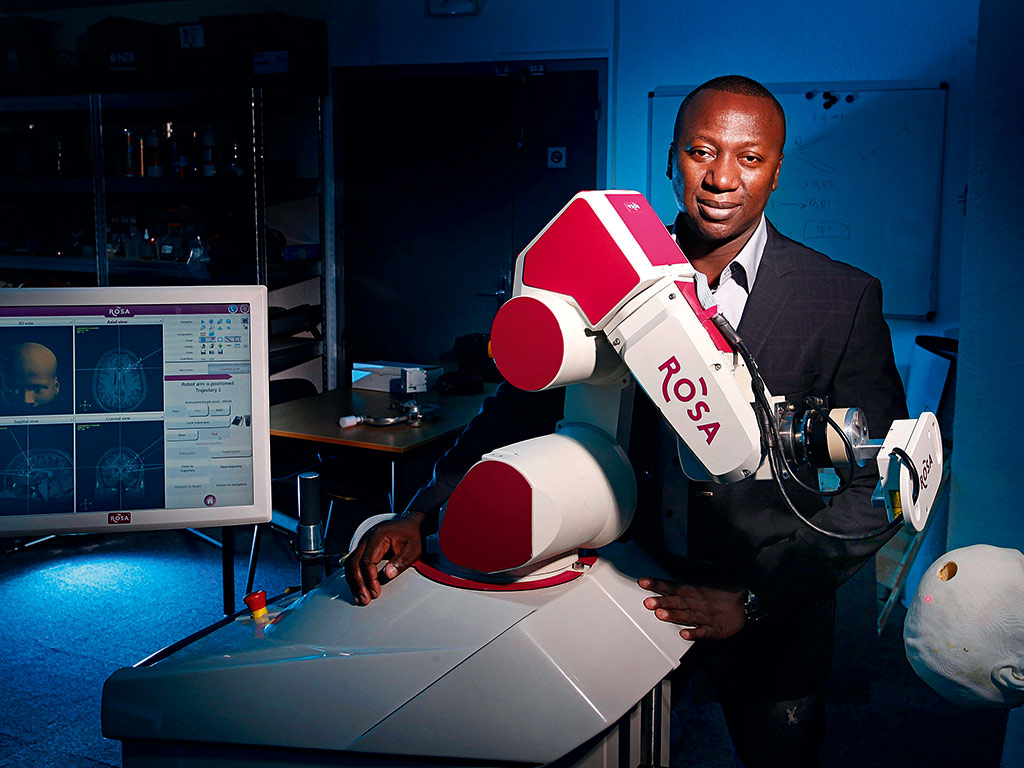 Since founding Medtech in 2002, Bertin Nahum has contributed to the development of groundbreaking surgical robotic technology such as ROSA and BRIGIT
Profiles

Bertin Nahum’s status as a “revolutionary high-tech entrepreneur” is surpassed only by Steve Jobs, Mark Zuckerberg and James Cameron, according to the 2012 Discovery Series ranking, which picked out the Senegal-born French national as deserving of unreserved praise in his field. A self-proclaimed “diverse entrepreneur”, Nahum’s career is best characterised by an unrelenting willingness to advance the technological capacity of healthcare and introduce innumerable innovations to the industry.

Although he possesses a certain steady-handedness, Nahum’s expertise lies not with surgery but rather with engineering and, more specifically, robotics. Recognising the importance of technological advancement in bettering the sector’s existing systems and processes, Nahum’s work in surgical robotics has played an absolutely essential part in healthcare’s technological evolution. Far from the crude and somewhat simplistic surgical tools of yesteryear, the modern-day phenomena of surgical robotics has steadily begun to work its way into complex surgical procedures and cement a place at the heart of industry change. What first arose as a means of offsetting the jitters of nervousness has grown to such an extent that it now augments a surgeon’s learned ability with a machine-like precision and minimises surgical invasiveness to quite extraordinary degrees.

Medtech says of robotics, “In this growing industry, we expect the robotics manufacturing sector to double before 2015. Medical robotics in particular represents a critical market for further development of general robotics and has become an increasing demand within the body of healthcare professionals and patients.”

Starting the machine
Nahum credits his initial love of engineering to his maths teachers, whom he claims were instrumental in encouraging him to pursue this line of work in later life. On finishing school, Nahum studied engineering at the National Institute of Applied Sciences in Lyon, which earned him an Erasmus grant to enter the University of Coventry where he secured a Masters of Science degree in robotics.

“At the end of my studies, I took part in the design of software capable of detecting brain injuries automatically using scanners. This feeling of usefulness gave me the desire to dedicate my career to patients, but on the technician side, through the creation of robots that could assist surgeons with their operations,” he recalled later in a company press release.

Nahum’s career in robot-assisted solutions spanned numerous organisations, including Computer Motion, Integrated Surgical Solutions and IMMI, where he spent a decade establishing a name for himself in the emerging surgical robotics industry. After an impressive stint in this department Nahum finally went on to establish Montpellier-based Medtech in 2002 and sought to improve upon the safety and stability of various robotic-assisted solutions on the market. The company states quite simply, “We are focused on developing higher technological procedures and innovative design by listening to our customer’s needs and by anticipating future requests by providing the most state-of-the-art product possible.”

Robot rock
It was at Medtech that Nahum pioneered a robot called BRIGIT, which was put to use assisting doctors with orthopaedic surgery and provided mechanical support for precision sawing of bone tissue where necessary. The solution was successful to such an outstanding degree that in 2006, Zimmer Inc, the world’s leading orthopaedic surgery company, acquired the patent portfolio from Nahum.

However, the ambition of this project pales in comparison with Medtech’s latest iteration of robot assistant, which is an integrated multi-application platform called ROSA, enabling surgeons to perform extremely complex brain surgery and with far greater ease and accuracy. The ROSA robotic assistant has, since its inception in 2009, proven so successful that in 2012 it generated an annual turnover of €2m, according to Le Point, and is being put to use in the few hospitals around the world that can afford the €300,000 price tag. ROSA is without doubt Nahum’s most impressive achievement to date in that it not only benefits patients and neurosurgeons, but more broadly pushes the existing technological parameters of healthcare. Medtech said of ROSA that it, “embodies the new generation of surgical assistance technology. It is the successful conclusion of an unmatched experiment in applying advanced robotics to address unmet surgical needs.” The company goes on to add that ROSA “offers increased accuracy, reliability and control over the procedure, helping physicians to enhance surgical performance”, while at the same time assisting surgeons in a broad range of procedures pertaining to Parkinson’s disease, Epilepsy, tumour surgery and endoscopy.

Regional strength
Not content with advancing the existing standards of healthcare, the ROSA project also reinforces France’s standing in the robotics field. “France has been recognised as a centre stage for service robotics on an international scale with Medtech being the principal manufacturer in both France and Europe in general, and being recognised as one of the top half-dozen promising companies in the world in their field,” reads the company website.

Nahum’s nationality has long been an area of contention, with many being too eager to label him a “symbol of a visible minority”. Though quick to dispense of this label, he has demonstrated a commitment to the region’s robotics industry by manufacturing all of the company’s robot components in France. “I’m not the symbol of a visible minority,” Nahum told LePlugg. “My parents were born in Benin, I was born in Senegal, by accident. But I’m French and I don’t want to have to justify my roots or my French nationality.” Regardless of Nahum’s roots, his revolutionary ideas and capacity to think beyond the obvious has contributed to the extraordinary evolution of healthcare and will no doubt continue to do so provided he continues at the same pace.