Joe Kaeser is unquestionably the CEO to rebuild Siemens. After 33 years at the company, he has finally reached the summit and is ready to make it his dominion 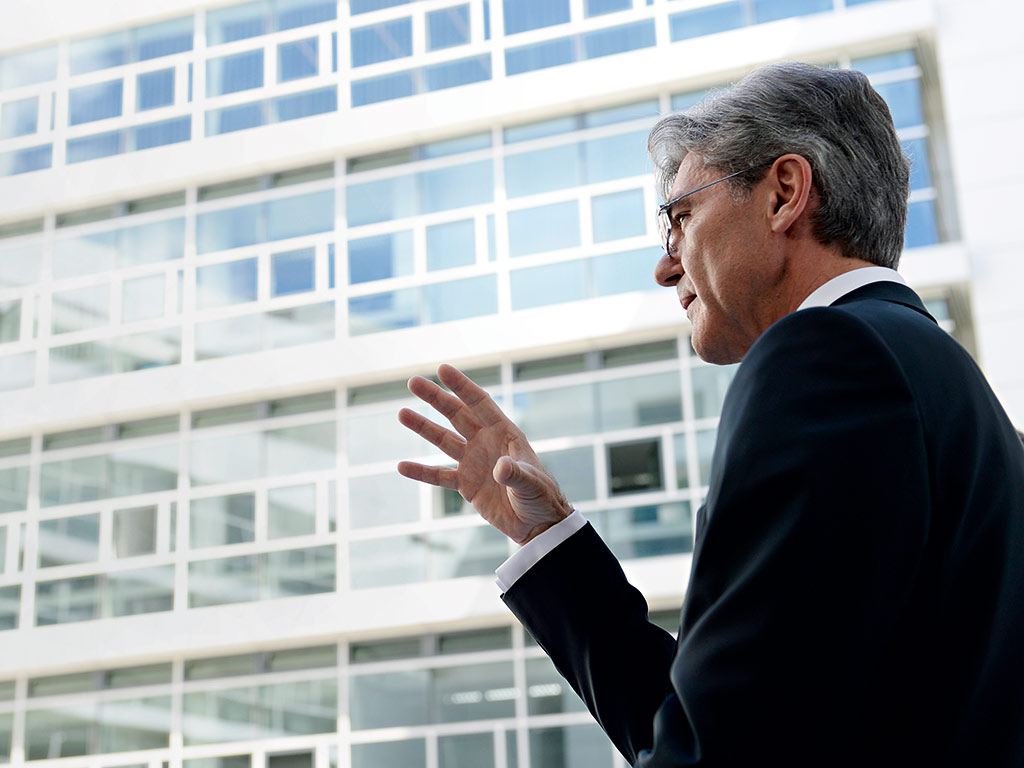 Since taking on the role of Siemens CEO in August 2013, Joe Kaeser has already made an impact on the company with his hands on, practical approach to leadership
Profiles

Joe Kaeser is one of an increasingly rare bread of executive: he has dedicated his entire professional career to a single company. He has been a powerful voice within Siemens as it has grown and developed into one of the world’s leading engineering and electronics conglomerates. Though Kaeser has only been at the helm since August, his distinctive style is already sending waves through the business world as he starts to reorganise the company with a view to respond more adequately to changing market demands. Kaeser was born and educated in Germany, and joined the Siemens Components Group in 1987. From then on, he steadily ascended through the ranks, heading departments and projects in Germany, Malaysia, the US and other regions. This international experience means that when Kaeser moved into upper management and then on to the executive suite, he had vast experience of many facets of the business. Siemens is an extremely diversified conglomerate, and it is clear that Kaeser’s detailed knowledge of the company’s processes is second-to-none.

King of the castle
Kaeser’s predecessor Peter Löscher left ‘by mutual consent’, in August after a series of unsatisfactory financial results. Though Kaeser and Löscher had a good working relationship, the new CEO has undertaken a series of rather drastic reforms in a clear attempt to mitigate losses and return the company to its former glory. “Our company is certainly not in crisis, nor is it in need of major restructuring. However, we’ve been too preoccupied with ourselves lately and have lost some of our profit momentum vis-à-vis our competitors,” he said in the official Siemens press release upon his appointment.

“My declared aim is to put Siemens back on an even keel and create a high-performance team. Because as a team we’re hard to beat. The Siemens team will provide information on the further refinement of our company programme and address the medium-term prospects and our vision for the company. You’ll see: there’ll also be a Siemens after 2014.”

Kaeser is certainly not a laissez-faire CEO. Even before he took over, he had been quite open about his dissatisfaction with Löscher’s strategies. And he was unapologetic about his outspokenness. “That should be perfectly acceptable, in a company led by an executive board that encourages open debate,” he told Der Spiegel the week of his appointment. “Peter Löscher and I are no doubt very different types, but both of us, and the executive board, have been entrusted to lead Siemens to success.”

Hands on
It has certainly been clear for some time that once Kaeser ascended to the role of CEO he would pursue a more aggressive style of management than his predecessor. In the same interview he referred to it as “a controlled offensive”; for Kaeser it is important now for Siemens to return to its core values, and redevelop its core business – electrification. He has been clear in the past that for the company to return to the levels of profit it was once known for, it would be necessary to make cuts, but more importantly, invest in new areas of business. “We cannot afford to miss any opportunities, as we did with telecommunications technology. We woefully underestimated the internet,” he said.

Because Kaeser’s own history is so closely entwined with the recent history of Siemens it is perhaps understandable that he is not only more voracious when it comes to leadership, but also more emotionally invested in its success.

In another aggressive move, the CEO has recently promised shareholders a big share buyback, though he has refused to reveal details of the restructuring plan that will shake up Siemens and is not expected until next May.

“I don’t want to present half-finished things,” he told reporters at Siemens’ former headquarters in Berlin in November. “We just want to explain what the company will look like after 2014.”

The share buy-back, announced to be worth up to €4bn, has so far been the only major strategy announcement made by Kaeser. The CEO is remaining resolutely silent on the subject of a shake-up and restructuring, which makes the buyback an even bigger deal. In a press release Siemens said “the share buyback serves exclusively for the purpose of retiring shares and reducing capital, for issuing shares to employees, board members of affiliated companies and members of the managing board, and for meeting obligations under convertible and/or warrant bonds”. However, such a large-scale operation will certainly serve to whet investors’ appetites about what is yet to come from Kaeser’s secretive camp.

Still recovering
Kaeser inherited Siemens at a complicated time; the company is still reeling from the corruption scandal that revealed widespread fraud and bribery. Though that happened in 2006, and Siemens responded impeccably by hiring Michael Hershman, Co-founder of Transparency International as a consultant, its reputation was damaged. Siemens reported the whole debacle cost around €2.5bn, €2bn of which was in fines alone. Kaeser was not implicated in the scandal, but he had recently been appointed COO, and had to land on his feet as a host of other senior managers were culled.

Since then, Kaeser has spoken about that time rather optimistically, describing the fall-out of the scandal as a “new beginning” for Siemens and a chance to grow in a healthier, more sustainable way. “Ultimately, strategy papers don’t make or break the future and sustained success of a company. Its corporate culture does,” he told Der Spiegel.

Though there is a long way to go before Kaeser brings Siemens back around, he has got off to a good start. The board voted unanimously to appoint him as CEO, and he is still enjoying tremendous support. Though an executive of his experience is certainly not taking anything for granted, and despite his current popularity the challenges ahead are unfathomable.

“As Chief Financial Officer, I was on safe ground,” he has said. “Now that I am CEO, things are different. But I won’t be making any easy compromises when I am convinced that something that’s in the best interests of the company has to be done. Siemens means too much to me.”