Carsten Spohr faced a significant challenge when he took the helm at Lufthansa last year. With the Germanwings catastrophe casting a shadow over everything else, even more turbulent times lie ahead 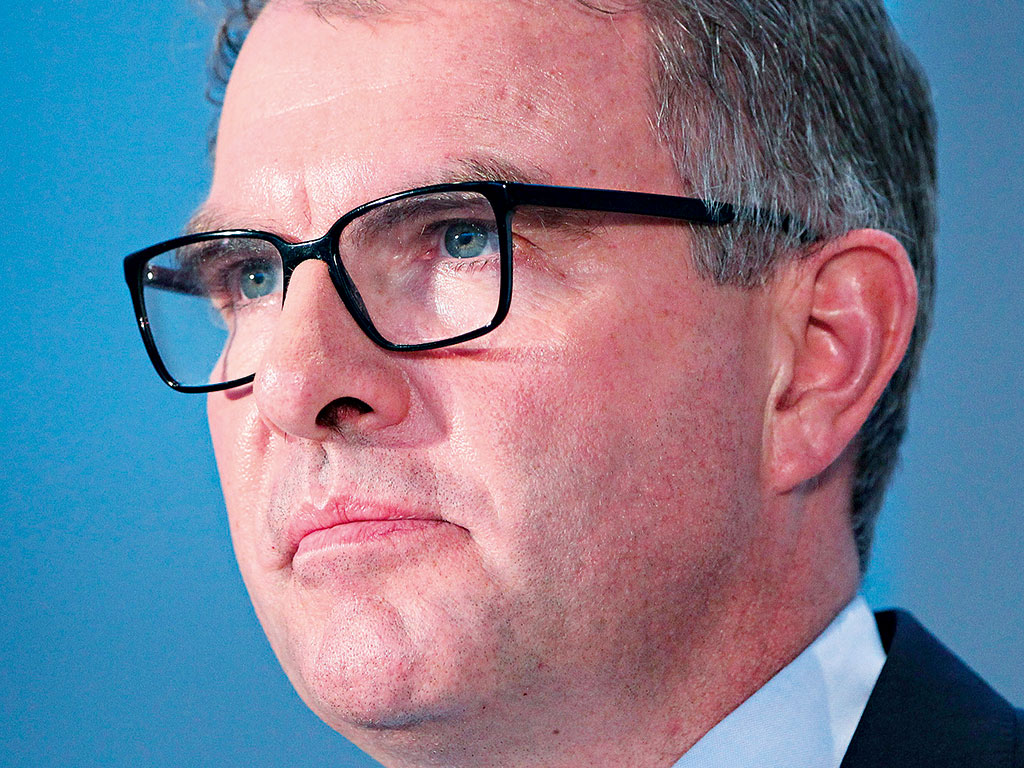 Carsten Spohr, CEO of Lufthansa, had only been at the helm for ten months when the Germanwings disaster took place
Profiles

It’s the biggest catastrophe to hit Lufthansa in the airline’s long history, and one of the worst disasters on French soil in decades. On March 24, Germanwings co-pilot Andreas Lubitz deliberately flew flight 9525 into a mountain range in the Alps, killing all 150 people on board. In the days and weeks following the tragedy, further details have come out about Lubitz’s life. The media implication, although it is far from proven, is that the airline should have seen the signs and prevented the disaster.

In such situations, the spotlight inevitably falls on the leaders. In this case, it is fixed on Carsten Spohr, CEO of Germanwings’ parent company and German flag carrier Lufthansa. Spohr, a pilot himself, was in the role for just 10 months when the Airbus A320, en route from Barcelona to Dusseldorf, crashed.

Sky veteran
After graduating in industrial engineering, Spohr gained his commercial pilot licence from Lufthansa Flight Training. Following a short stint with Deutsche Aerospace, Spohr returned to Lufthansa and, between 1995 and 1998, served as personal assistant to the CEO. He then moved on to head regional partnerships and was subsequently appointed to lead the group’s passenger airline strategy. A series of promotions later, he rose to become Chairman of the Executive Board and the group’s CEO on May 1 2014.

EXPERIENCE
1991: After graduating in industrial engineering, Spohr trained for his pilot’s licence at Lufthansa Flight Training, qualifying in 1993. He has maintained this licence ever since
1993: Having trained as a pilot, Spohr turned his attentions
to the business world, enrolling on the management training programme at Deutsche Aerospace
1994: Spohr then returned to Lufthansa, spending over a decade in various roles, including PA to CEO Juergen Weber, before becoming CEO of Lufthansa Cargo in 2007
2011: In recognition of his loyal service, Spohr was invited to join the executive board at Lufthansa. In 2014, he was named Chairman and CEO, replacing Christoph Franz

“As a Lufthansa man born and bred, I view the appointment as the new CEO as both an honour and an obligation”, Spohr said in a company press release following his appointment. “Together, we will meet the challenges confidently, willing to embrace change and prepared to deliver on our strategy in order to make our company resilient and ready for the future also beyond 2015.”

Despite working in various areas within Lufthansa’s business, Spohr has maintained his pilot license for the Airbus A320 family. According to aviation experts, by doing so he is able to fully appreciate technical and safety issues, with the added benefit of gaining further esteem among colleagues and rivals within the field.

Striking out
However, despite an in-depth knowledge of piloting, and a captain’s licence to boot, Spohr appears to be in disagreement with some of Lufthansa’s team. In response to the profit crisis that was inherited from his predecessor, Christoph Franz, he has implemented various changes in an attempt to steer the company in a new direction and compete with budget European rivals. A bid to expand low-cost operations has been met with great concern within the company, mainly from Lufthansa’s pilots.

As well as trying to stop ticket prices from falling further and increasing short-haul flights, Spohr has been cost cutting across the board. Historically, Lufthansa pilots retired at 55 and received up to 60 percent of their pay for the ensuing decade, after which their regular pension began. Spohr’s attempt to pull back such benefits for new recruits, in addition to raising the retirement age, has led to a damning dispute with pilots and a series of strikes that have amounted to €200m in lost profits.

Vereinigung Cockpit Union pilots walked out in March, ending their strike just days before the crash of flight 9525. It lasted four days and caused Lufthansa to cancel hundreds of lucrative long-haul flights, affecting over 20,000 passengers. “We fortunately have very loyal customers, but if this continues in the long run and we aren’t able to offer the reliability we need, then it could become a problem for our customers”, Peter Gerber, Chief Executive of Lufthansa Cargo, told Reuters at the time. A resolution has not yet been reached between the union and the airline, while attempts to negotiate higher pay for pilots have been firmly rejected.

As expressed by Gerber, customer faith has started to falter as a result of the strikes and growing unreliability for those flying with Lufthansa. The Germanwings crash further brings into question this vital aspect of any buyer-seller relationship – that of trust. Consequently, in addition to dependability, the second hallmark of Lufthansa’s offerings – safety – also faces public scrutiny. Given that other European airlines offer considerably cheaper fares, the possibility of greater losses is high. Before the disaster, the airline’s tightening profit margin was at a critical juncture. Now, its reputation also faces a setback. Rebuilding the latter, before tackling the former, is of utmost importance in order to prevent the expansion of the tragic event into long-term revenue losses for the airline.

Crisis control
In the event of a catastrophe, it is vital for senior management to quickly display effective leadership skills and judgement in order to steer the company away from the path of self-destruction. According to a 1996 study by Dr Rory Knight and Dr Deborah Pretty, it was postulated that a catastrophe almost always has an initial impact, amounting to a decline of around eight percent in shareholder value. “It typically takes around 50 trading days after a catastrophe for a company to make a full share price recovery – and some companies don’t recover at all. For example, the 1996 ValuJet Airlines flight 592 crash killed 110 people, and shareholder value losses amounted to about 35 percent of the company’s market capitalisation”, says Wayne Harrop, a crisis specialist in disaster management.

Spohr has been dealing with the tragedy reasonably well, attending various press events and memorials, and speaking out for the need to support the families of the victims as much as possible. While maintaining a compassionate stance, the visibly shaken CEO has also stood in defence of his team. “This is a tragic one-off event. We are proud of the quality of our pilots”, Deutsche Welle reported Spohr as saying. When asked about the company’s strategy following the incident, he said that it was too soon to be considered; again the newly-appointed CEO exhibited sympathy and altruism, standing in stark contrast to Tony Hayward, CEO of BP at the time of the Deepwater Horizon oil spill, who caused several setbacks for his company with a defiant PR approach.

Key values and emotional intelligence must be prioritised, in order to maintain, or indeed restore, confidence in the eyes of both customers and stakeholders. Being the first to report any further revelations or bad news is one way of demonstrating transparency and public awareness. “One initial problem that could resurface is the CEO’s claim that the co-pilot was cleared to fly with no caveats. This statement could be perceived as early fog in his judgement or given from an out-of-touch leader”, Harrop claims. “Knowing what has publicly emerged about the depression and state of mind of the co-pilot, this affirmation could be seen as misplaced trust, damaging the credibility of any future company claims, and putting at risk trust in Lufthansa’s apparent early understanding of the problem.”

Spohr can restore the group’s reputation by working closely with authorities to maximise the lessons learnt from this tragedy and ensuring it rebounds to become one of the world’s safest airlines. Implementing new regulations will be a tricky task, given how previous deliberate crashes have occurred. “There is a delicate balance to strike between aircraft security and functionality, exemplified by the term ‘risk homeostasis’, where treating one risk can introduce another latent risk”, says Harrop. “The careful balancing of risk is clearly a boardroom issue for all airlines, in terms of juggling the need for controlled emergency access into the cockpit versus the classic terrorist hijacking risks exposed by 9/11.”

Facilitating a full investigation will shed further light on the incident and how such a tragedy can be prevented in the future. “In this particular case, it was a pilot who made it through the mental screening and was allowed to fly – something in the system clearly broke down, what was it and how can they fix that?” asks crisis management consultant Dr Steve Goldman. Lufthansa’s reputation for safety and quality will help the company recover its status relatively quickly, as will the implementation of additional measures for ensuring that pilots are physically and mentally fit to fly.

Compassionate compensation
Bringing the company together and strengthening staff relations is vital, particularly as Lufthansa employees will be deeply affected by the crash, which comes at a time when many were already feeling disenchanted and detached from senior management. For the Germanwings team, the passengers who died were their customers, while the crew that perished were their friends. “It’s very hard to maintain operations when your friends have just died, and so the CEO has to understand that and bring people together to make sure that the company can continue its operations”, Goldman notes. Showing compassion while ensuring the smooth running of a multinational group requires a careful balancing act from the airline’s board and, in particular, from Spohr. “He is the face and the soul of Lufthansa, and that’s the image he has to project”, adds Goldman. “I think he’s done a good job of that.”

Compensation is another sensitive matter that could either make or break Lufthansa’s reputation. Considering the nature of the incident and the worldwide coverage that it received, it is essential that the airline appears as accommodating and compassionate as possible when it comes to providing reparations to the families of the 150 victims. Disputing the amount requested and embarking on lengthy court battles would be irrecoverably harmful for Lufthansa. The airline will be safeguarded from shouldering the cost of the lost plane itself, as airlines are heavily insured in the event of a crash. Compensation packages, however, are not so carefully covered.

For now, Spohr is responsible for guiding Lufthansa out of the dilemma it has been plunged into. Early in his career as the CEO of a multinational corporation, Spohr’s leadership skills are being tested to their utter limits. Given his response so far, it appears that he is up to the task of disaster management, but rebounding Lufthansa’s profits could prove to be more problematic. If Spohr can achieve this feat too, he may turn out to be the airline’s greatest head to date.