Ferran Soriano has hit as many highs as lows in his career thus far. Now having been given a route back into football as CEO of mega-rich Manchester City, he will need to be on top form 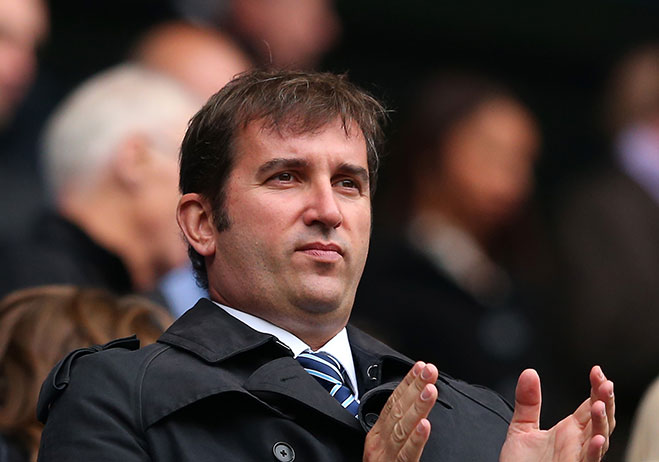 When Ferran Soriano first arrived at FC Barcelona in 2003, he was shocked to find the club – which was already plagued with a terrible record of transfers – was paying up to €30m for unproven players. He was even more upset when he was told the rationale behind such trades: after a horrible run, the club “was owed a good move on the transfer market”. This was no financial strategy, and so Soriano decided to clean house. Within five years, he’d doubled Barcelona’s revenues and turned its heavy losses into lucrative profit.

Little wonder then, that a financially ailing Manchester City leapt at the chance to bring Soriano in as its CEO last season. What City owners Abu Dhabi United Group may or may not have realised was that, after turning things around at Barcelona, Soriano’s brief stint at Spanair saw the major airline crash and burn. Only time will tell whether City’s fate emulates that of Spanair or Barcelona.

Team branding
Throughout the 1990s, Barcelona was widely regarded as one of the unluckiest clubs in history – a tradition which carried into the new millennium. From 2000-2003, poor management, transfer mistakes and a lazy roster rendered absolutely no trophies, zero titles and an exodus of loyal fans. Worse yet were the club financials, which were suffering losses of €73m per year. So when politician and media mogul Joan Laporta was elected president of the club in 2003, big changes were required to ensure the club survived the next decade. That’s probably why Laporta decided to bring on up-and-comer Soriano as his vice president in charge of finances. A Catalan-native, Soriano’s credentials at the time varied wildly from telecommunications to consumer products. After earning business degrees and MBAs at the Rensselaer Polytechnic Institute, Université Catholique de Louvain and ESADE, Soriano held senior positions at The Mac Group and Reckitt Benckiser. He also founded his own management consultancy firm, Cluster Consulting, before Laporta asked Soriano to help with Barcelona’s finances.

While Laporta became more popular with the Spanish media than some of his players, Soriano worked tirelessly behind the scenes to produce financial results. Having lived throughout Catalonia for much of his life, Soriano emphasised the club’s power as a commercial brand and local identity from day one. With this in mind, he took the Catalan brand and successfully sold it across the globe. Community relations were vastly improved by his idea to invest in a charity deal with UNICEF, while the Qatari Foundation agreed to fork out £25m per year to help fund club operations. By 2008, revenues had skyrocketed from €123m to €308m, while the team’s €73m loss was transformed into an €88m profit. It was because of Soriano’s sponsorship deals that Barcelona was able to secure big names such as Ronaldinho and Messi; as Soriano explains: “Football is not about marketing, it’s about playing and winning – so if we don’t win on the pitch, there’s no good marketing strategy.” Under Soriano’s tutelage, Barcelona found success on and off the pitch.

Squabbles within the boardroom eventually led to the 2008 vote of no confidence that finished Laporta, and in a show of loyalty Soriano resigned too. It’s probably not coincidental that Barcelona has since started posting overall losses once more.

Clipped wings
Soriano’s next appointment was nothing short of a disaster. In 2009, he was appointed the CEO of Catalan airline Spanair. Shareholders were clearly hopeful he could work his magic on the airline’s mortifying financials, which had been devastated by the financial crisis in 2008. The Catalan regional government had grudgingly agreed to float Spanair €140m in return for a 24 percent stake in the company. Meanwhile, Soriano’s history of improving brand identity and securing sponsorship deals was meant to encourage new investment in the company. It didn’t. Soriano was able to drastically cut costs as he sought a rescue deal from Qatari Airways that would have seen the UAE company completely buyout Spanair, but that deal fell through. In January 2012, Spanair decided to shut down all operations with immediate effect (but without warning). The move left 23,000 fuming passengers stranded, while Soriano shrugged that: “The most sensible and safe decision was to close down operations.”

Hunting for silverware
Soriano wasn’t unemployed for long. In September 2012, he was hired as Manchester City’s CEO. Here Soriano was tasked with cleaning up the mess of former CEO Garry Cook, who had resigned the year before after a colourful email exchange concerning a player’s mother. The team’s financials weren’t exactly in order either. When Soriano took charge last year, his title-winning team was posting a loss of £97.2m – a gross breach of UEFA’s fair play regulations stating clubs cannot lose more than £45m a year. Although the law-breaking losses must be amended, it’s unlikely Manchester City will suffer because of it – being bankrolled by the wealthy Sheikh Mansour bin Zayed Al Nahyan certainly has its perks. Yet Soriano must act quickly to avoid serious league penalties for his new club’s breach of policy. On the pitch, this has started with the sacking of manager Roberto Mancini, who failed to bring in another trophy last season, as well as advocating a more balanced 4-3-3 lineup. Off the pitch, Soriano is making investments in talent pools aimed to emulate the famous training grounds of Barcelona. He’s also helped to secure co-ownership of a new club franchise in America’s MLS. It can’t yet be said whether Soriano’s ambitious investment strategies will render results, but his confidence in Manchester City appears resolute.

“In the grand scheme of things, if we look at the next five years and I could plan now, I would say I want to win five trophies in the next five years,” he says. “That may mean we win no trophies one year and two in another, but on average, I want one trophy or title a year. That is the Champions League, the Premier League or the [FA] Cup.”