Stephen Elop has been in charge of Nokia for two years, but despite his ‘Burning Platforms’ memo, he has still struggled to turn the company around 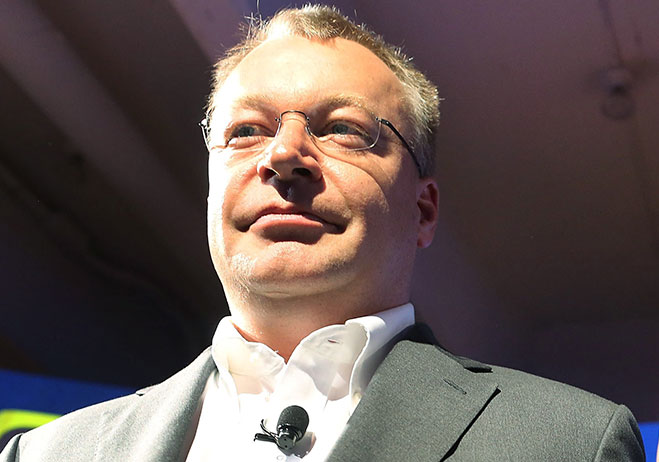 Nokia CEO Stephen Elop has not been having a great time at work. A Nokia shareholder recently suggested that he might be on his way to hell. “You’re a nice guy and the leadership team is doing its best, but clearly, it’s not enough,” shareholder Hannu Virtanen told Elop. “Are you aware that results are what matter? The road to hell is paved with good intentions. Please switch to another road.”

Elop has held the highest position in Nokia since 2010, after heading Microsoft’s business division. He was brought in specifically to help dig Nokia out of the hole it had been digging itself into in the booming smartphone market. When Elop was appointed CEO of the beleaguered mobile phone manufacturer, its profits were in free-fall. Though Nokia still had revenues of €40bn and an operating profit of €1.2bn, it was haemorrhaging its market share to Apple and Samsung. Months after his move to Espoo, Nokia’s headquarters, he managed to secure a deal with Microsoft to modernise the Finnish mobile phone maker’s smartphone division. It seemed like a good move at the time, and it might still eventually pay off – Nokia has just launched its new flagship smartphone – but revenues have nonetheless dropped to €30bn and the company made a loss of €2.3bn.

Elop might be facing the most challenging moment in his career, but it is not the first time he has been in charge of an embattled company. In fact, he started his career as a director for Lotus Development Corporation, after completing his studies in engineering at McMaster University in Canada. He soon moved into the role of CIO for Boston Chicken in 1992. The rotisserie chicken chain grew rapidly during Elop’s time there, but the rapid expansion meant it accrued significant debt. Elop left Boston Chicken, by then called Boston Market, in 1998, when the company filed for Chapter 11 bankruptcy.

Hardware man
What originally attracted Nokia to Elop were his seven years at Macromedia, where he worked on web and IT, eventually becoming CEO in 2005. While in the role he presided over Adobe’s acquisition of Macromedia, eventually becoming president of worldwide field operations at Adobe. Though he remained in the position for less than a year, Adobe CEO Bruce Chizen said “Stephen has been a tireless advocate committed to the successful integration of Macromedia and Adobe. However, looking beyond a successful integration, the responsibilities of leading Adobe’s worldwide field operations are not aligned with his longer-term career goals. We’ll miss his leadership and we wish him well.”

After Adobe he became CEO of Juniper Networks, a manufacturer of networking equipment, for a year, before settling as head of Microsoft’s business division. Nokia thought he was the best man for the job because of his American connections. The mobile phone manufacturer has faced a long-time struggle to break the US market. There were concerns about his appointment though: some suggested he lacked the vital connections with American mobile carrier networks that had so far eluded Nokia, while others pointed out that Elop is essentially a ‘hardware man’, and will struggle to compete with Apple on software design.

When Elop took the helm at Nokia at the end of 2010, 101 million smartphones were sold that quarter globally. Nokia sold 28 million units in that period, more than Apple, according to International Data Corp. But Apple and Samsung were growing faster than Nokia, and the Finnish company’s market share dropped more than ten percent. Elop was brought in specifically to reverse those numbers – a gargantuan challenge. “The first iPhone shipped in 2007,” Elop wrote at the time, “and we still don’t have a product that is close to their experience. Android came on the scene just over two years ago, and this week they took our leadership position in smartphone volumes.”

Losing the war
Soon after his appointment Elop sent the defining email of his career, the ‘Burning Platforms’ internal memo to his staff. In it he compared Nokia’s position in the smartphone market to that of a man standing on a burning oil platform. The memo was meant as a wake-up call to Nokia employees and management. “It is one of the most combustible and gripping documents ever to emerge from a major corporation,” said the BBC, “with its elegant writing style and brutal honesty, the 1,200 word missive is far removed from the average management pep talk.” And yet, within his first 12 months at the company he had to make the difficult decision to cut 7,000 jobs. The cull was part of his plan to drastically streamline the company before fixing its many problems. Elop’s plan to tie Nokia’s future to its partnership with a once bitter rival, Microsoft, was something of a gamble. However, it is still to pay off. “There are moments where you fall short of expectations, you issue a profit warning, which causes everyone to cringe,” says the CEO.

“But when I see the employees proud and focused and doing great work, you know there are good times ahead because that’s what sets the tone for the whole company.”

“We make adjustments as we go. But it’s very clear to us that in today’s war of ecosystems, we’ve made a very clear decision to focus on Windows Phone with our Lumia product line. And it is with that that we will compete with competitors like Samsung and Android.”

Things are still looking pretty gloomy for Nokia though. Elop has managed to decrease costs, but he has not been able to claw back any of the market share the company has shed over recent years. Whatever the future holds for Elop and Nokia, the road will certainly be filled with obstacles.